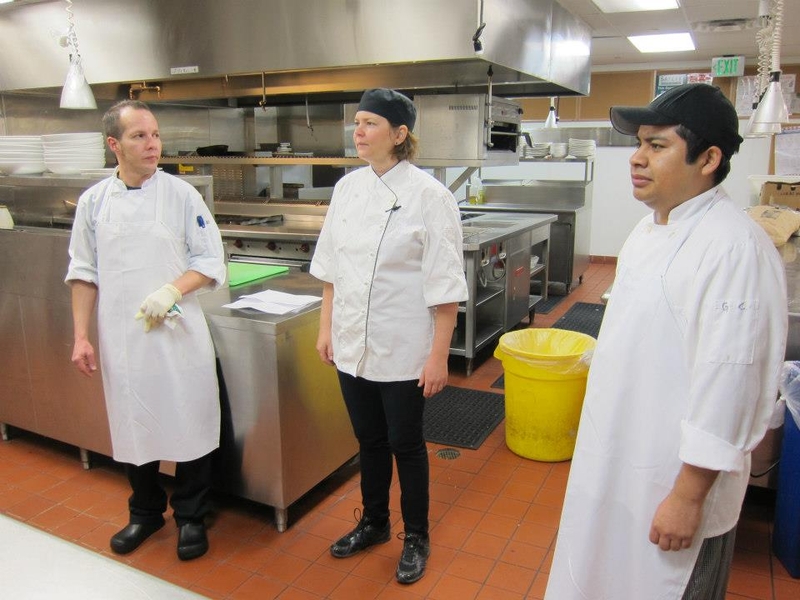 Swedish top chef Malin Söderström runs a workshop for the chefs at the K ennedy Center on how to cook the Nordic Way.

Mail Facebook Linkedin Twitter Sign up to newsletter
New Nordic Food is conquering still more countries around the world with its manifestation of local, sustainable and seasonal ingredients in new and innovative dishes. These days Nordic Food Diplomacy is on the menu in Washington D.C. in connection with the cultural festival Nordic Cool at the Kennedy Center.

Nordic Food Diplomacy (NFD) is part of the New Nordic Food programme which the Nordic Council of Ministers has been running for six years. Now it is being used at the Nordic cultural festival at the Kennedy Center in Washington D.C. and food is an important part of "Nordic Cool".

The idea behind Nordic Food Diplomacy is that all meetings, workshops and other events with a Nordic background should also involve the serving of Nordic food and drink as part of the encounter with Nordic culture – or at least involve food prepared according to the principles of New Nordic Food, with their focus on sustainable and ethical cooking.  Nordic politics and values are usually associated with high ethical standards and consideration for the environment – elements, which are in keeping with the New Nordic Food manifest.  - It is important to think of food as an enhancement of Nordic culture and that is how we are communicating Nordic Food Diplomacy through the Nordic Cool festival, says Charlotta Ranert, Project Manager for the Nordic Food Diplomacy project.

Ranert has also been coaching many of the chefs in Washington in preparation for the Nordic Cool festival.   Through the website www.nfd.nynordiskmad.org the ideas behind Nordic Food Diplomacy are set forth, with an idea bank, tips from embassy chefs to their colleagues and inspiration to chefs who would like to work with Nordic ingredients, present innovative dishes and also “think Nordic” in terms of the general set-up. In the first instance, Nordic Food Diplomacy is directed at the Nordic embassies and the Nordic countries are encouraged to use the NFD concept for promotions abroad to ensure that culture and storytelling using food becomes an integrated part of official meetings and receptions.

At the Nordic Cool event in Washington these ideas will be tested in practice, especially when the Swedish chef Malin Söderström, in partnership with the Kennedy Center's restaurant chef Joe Gurner, runs a workshop for the center's chefs.  They will be introduced to the ideas behind New Nordic Food by preparing a three-course Nordic menu, which Malin has designed especially for the festival.  During the entire festival the restaurant in the Kennedy Center will serve the same Nordic dinner for its guests.  And the Center's café will have Nordic specialties on its menu. Even the drinks served at Nordic Cool will have a Nordic character.   Malin Söderström, who normally runs MoMuMat - Moderna Museet's popular restaurant in Stockholm - is an excellent communicator. She was the first female chef to be responsible for the Nobel dinner in 2011 and she took part in Nordic Food Diplomacy's 2012 event, when Nordic chefs visited Tokyo. Malin Söderström will also run a kick-off inspiration workshop for the Nordic embassy chefs and other staff in Washington.  The embassy staff will be gathered to inspire one another and to create an exchange of experiences, to get ideas for the many side-events at Nordic Cool.  The Nordic Cool festival coincides with a number of political and cultural visits from the Nordic countries. The Nordic ministers of culture and the directors of several theatres and cultural institutions are coming to Washington. The five Ministers for Nordic cooperation, lead by the Swedish Minister for Trade, Ewa Björling who heads the Nordic Council of Ministers in 2013, will meet for a Nordic lunch with the Ambassadors from the five Nordic countries.

Gender. climate and biodiversity will be discussed at an event hosted by the Swedish Minister for Agriculture, Eskil Erlandsson, in cooperation with World Watch Institute - a clear marker of the social profile and ethical aspects of New Nordic Food.