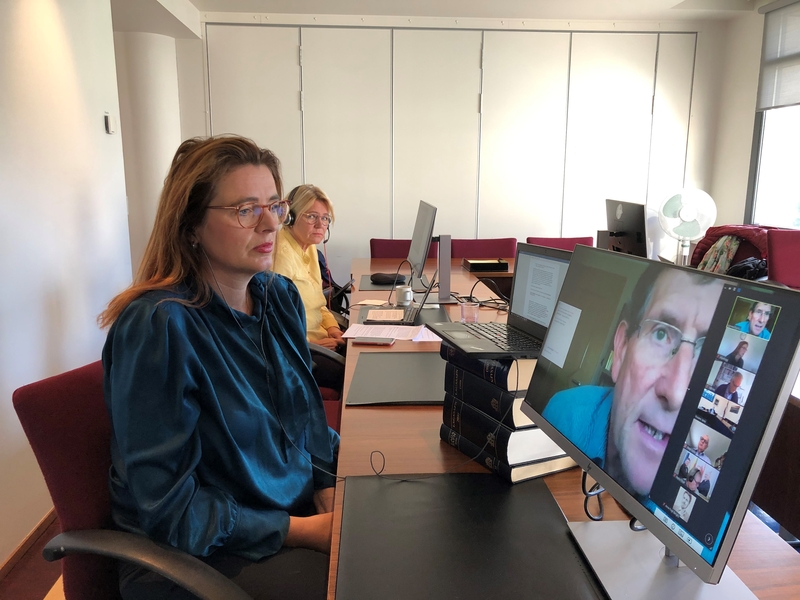 Mail Facebook Linkedin Twitter Sign up to newsletter
The Nordic Council has held a digital meeting with the Baltic Assembly and the Benelux Parliament. During the meeting parliamentarians discussed topics including the situation in Belarus, COVID-19, and joint efforts to strengthen democracy in Europe.

Participants in the meeting included all the presidents and vice presidents of the respective organisations. They all agreed on the importance of showing their support for the opposition in Belarus, and stressed that the united support of the three parliamentary assemblies for the people of Belarus and for peaceful democratic forces in the country sends a strong message.

“It’s important that the people of Belarus see that they’re not alone. During our meeting, Tikhanovskaya also stressed that they are no longer the opposition – they are the majority. Instead, it is Lukashenko’s regime that is now the opposition,” said Gunnarsdóttir, who represented the Nordic Council at the meeting alongside Vice President Oddný Harðardóttir and Bertel Haarder.

Harðardóttir emphasised the importance of continuing to show support for the opposition.

“As parliamentarians, we must do what we can to help the people of Belarus. Within a few weeks, recent events may be forgotten by the media and our governments, and so we have a duty as parliamentarians to remind them of the situation,” she said.

Similar challenges during the pandemic

In discussions on COVID-19, it became clear that all three regions have endured broadly similar challenges during the pandemic in terms of border issues and different restrictions in different countries resulting in problems in regional co-operation. They also agreed that we have to learn from this crisis in order to be better equipped for the next one.

Silja Dögg Gunnarsdóttir also highlighted the threats to democracy in Europe. She said that she is very concerned about developments in Poland and Hungary in relation to democracy, freedom of expression, the independence of the judiciary, and women’s and LGBT rights.

“What’s new is that these values are now under threat within the EU as well. We must, of course, respect different political views and values, but what do we do when large parts of an EU country declare themselves to be LGBT-free zones, or when a member state dismantles its democratic institutions,” said Gunnarsdóttir.

The Nordic Council, the Baltic Assembly, and the Benelux Parliament have a long history of co-operation. The three parliamentary assemblies share the same values and all work to strengthen democracy, human rights, and the rule of law in Europe.