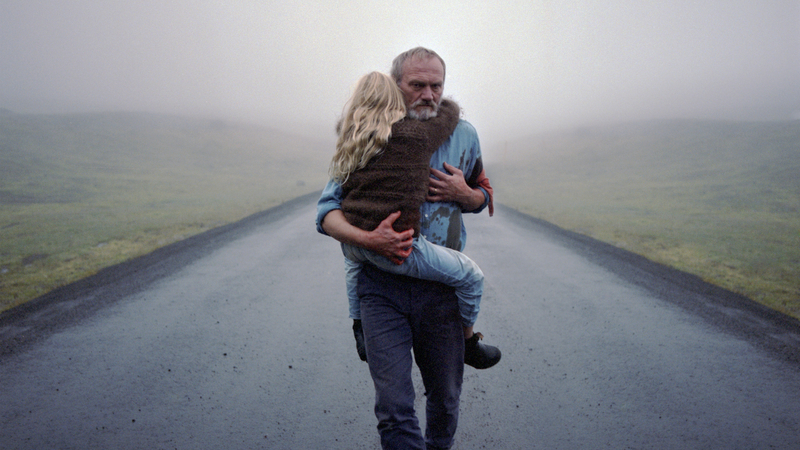 In a remote Icelandic town, an off-duty police chief begins to suspect a local man of having had an affair with his late wife, who died in a tragic accident two years earlier. Gradually his obsession for finding out the truth builds and inevitably he begins to himself and his loved ones in danger. A story of grief, revenge, and unconditional love.

In A White, White Day, director Hlynur Pálmason explores the crisis of a middle-aged policeman when his wife dies unexpectedly. Unable to succumb to his grief, Ingimar becomes a moody recluse with no meaningful relationships beyond a tender friendship with his granddaughter. Masculinity is a prominent theme in the film as Ingimar is imprisoned by his inability to communicate clearly with his co-workers or his daughter and granddaughter, who try to reach out to him for compassion and support during a time of tremendous grief.      Ingimar’s inner life is mirrored in the film’s uncanny and poetic visual storytelling. The fog that is synonymous with the eastern region of Iceland rolls a long way down the mountains and clings to Ingimar’s world like a ghost or a prison. The presence of the white fog also evokes a certain Icelandic artistic sensibility as its allusive nature has been the subject of many of Iceland’s foremost artists.

The film revolves around the stunning performance of Ingvar E. Sigurðsson as the grief-stricken policeman. He exposes the angry Ingimar’s silent and profound desperation in the slow and disciplined manner reserved for only the most experienced of actors.

Hlynur Pálmason (born 1984) is an artist and filmmaker born in Iceland. He started out as a visual artist and ventured into filmmaking by pursuing an education at the National Film School of Denmark. His graduation film A Painter (2013) won Best Short Film at the Odense International Film Festival and was nominated for a Robert Film Award in Denmark. His short film Seven Boats (2014) premiered at the Toronto International Film Festival. Pálmason’s debut feature film Winter Brothers (2017) had an outstanding career, winning more than 30 international awards such as Best Director at the Thessaloniki Film Festival, Best Film and Best Actor (Elliott Crosset Hove) in Vilnius, and Best Cinematography at the Seville European Film Festival. The film won nine awards at the national Robert Awards including Best Film. It was nominated for the Nordic Council Film Prize in 2018.

His second feature film A White, White Day had its world premiere at the Critics’ Week in Cannes where Ingvar Sigurðsson won a Louis Roederer Foundation Rising Star Award.

Anton Máni Svansson (born 1984) is co-owner of Reykjavik-based Join Motion Pictures, together with writer/director/producer Guðmundur Arnar Guðmundsson. Svansson studied psychology and screenwriting at the University of Iceland. Since founding Join Motion Pictures in 2007, he has focused on building strong partnerships with talented writer/directors, such as Guðmundsson and Hlynur Pálmason.

Guðmundsson’s debut feature film Heartstone won over 30 international awards including the Politiken Audience Award at CPH PIX, and Best Director at Iceland’s national Edda awards. The film was nominated for the Nordic Council Film Prize in 2017.

In 2017 Svansson won the Lorens Award (ex aequo) in Gothenburg for Best Producer with the film Heartstone. The same year he was selected as ‘Producer on the Move’ at the Cannes Film Festival.