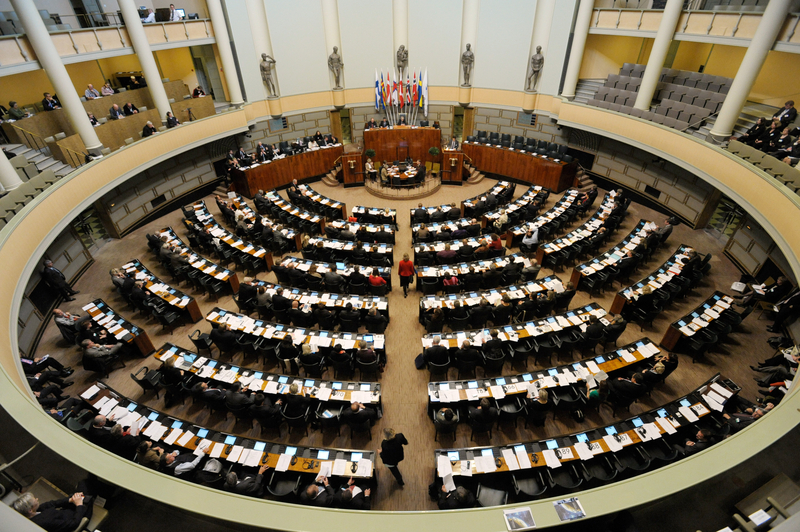 Photographer
Johannes Jansson/norden.org
Mail Facebook Linkedin Twitter
After the Second World War, the politicians of the day strived for stronger international co-operation. This was the time when the United Nations was established, the Council of Europe created and the first steps were taken towards the EU. Simultaneously, discussions were held on much closer Nordic co-operation, which eventually led to the setting up of the Nordic Council in 1952.
Post-1989

“As we gather here, the call for freedom and democracy gets louder and louder in the neighbouring European countries, where it has been a very rare commodity up until now. They ask for support from us, the better-off northern democracies (...) The Nordic Council cannot remain a mere spectator to this process.”

Indeed, the Nordic Council did not make do with the role of spectator. Contact was made with Baltic politicians as early as 1990 – i.e. before the dissolution of the Soviet Union and the reclaiming of independence by the Baltic republics.

As early as September 1989, the Danish Prime Minister, Anker Jørgensen, had proposed that a small group of parliamentarians from the Nordic Council should travel to the Baltic countries to discuss environmental questions. As a result, five parliamentarians travelled to both Moscow and the Baltic capitals in October 1990.

After a meeting in Moscow on this trip, the secretary of the Danish Delegation to the Nordic Council noted:

“The conservative forces are very powerful at the moment, even though they are bereft of ideas other than maintaining the old system.”

Other forces did advocate change.

The Session of the Nordic Council in Copenhagen at the end of February 1991, a month after the dramatic events in Vilnius and Riga, was attended by representatives of the Baltic republics.

Following the declarations of independence by the Baltic republics, the Nordic Council worked closely with its new sister organisation, the Baltic Assembly.

Co-operation continued to develop, and the Nordic Council forged contacts with politicians in many countries outside the Nordic Region.

Since 2007, the Nordic Council has been in regular contact with both the opposition and the government in Belarus.

Denmark joins the EEC, and the Nordic countries work more closely together

On 18 February 1972, two years after the Nordek plan had been agreed, only to be consigned to the dustbin of history shortly afterwards, the Danish Prime Minister, Jens Otto Krag, made a slightly bitter diary entry about the Session of the Nordic Council in Helsinki:

“I have participated in all except two or three Sessions. We flew up here, the whole plane packed with Danish delegates – about 90 in all. The number rises each year, while the importance of the resolutions falls.”

A year later Denmark, became a member of the EEC, which some feared would mean the end of Nordic co-operation.

However, new initiatives soon led to the establishment of the Nordic Council of Ministers and more binding inter-governmental co-operation.

At the 1976 Nordic Council Session in Copenhagen, Marjatta Stenius from Finland addressed the meeting in Finnish for the first time, which was against the standing orders of the day. In the wake of this action, simultaneous interpretation was introduced in 1977.

In September 1986, the Nordic Council held the first of two major environment conferences attended by delegates from a number of countries in Eastern and Western Europe. The theme of the first conference, held in Sweden, was air pollution.

The marine environment was the focus of the next conference, held in Denmark in October 1989. Since then, environmental issues have remained a high priority for Nordic co-operation.

Finland joins in and the first Nordic rights are formulated

The first Session of the Nordic Council was held in the Danish Parliament on 13 February 1953.

Hans Hedtoft, who had previously been the Danish Prime Minister, would serve in that capacity again later in his political career, and was the man who first proposed the idea of the Nordic Council, was elected as its first President.

Finland did not join until 1955, when relations with the Soviet Union thawed following Stalin's death.

Although Finland was not a formal member for the first two years, the statutes allowed representatives of Finland's government and parliament to participate if they so wished.

This desire was first expressed on 28 October 1955, when the Finnish parliament unanimously passed a proposal concerning Finland's membership.

At the opening of the fourth Session in Copenhagen, on 27 January 1956, the President of the Council, Professor Bertil Ohlin from Sweden, said:

“It felt as if a chair was empty when Finland was not here (...) Only now has the Nordic circle been completed.”

The joint Nordic labour market came into force on 2 July 1954, a forerunner of the free mobility of labour that would later characterise the EU.

This was probably most significant for Finland, a country still badly by the war and the reparations it was paying to the Soviet Union.

In 1952, passport-free travel was introduced between the Nordic countries, followed in 1958 by the more clearly defined Nordic Passport Union – a forerunner of the modern Schengen agreement.

This made it far easier for Nordic citizens to travel to neighbouring countries.

In 1955, the Nordic Convention on Social Security was implemented.

At the same time, negotiations on a customs union or a common market, both at Nordic and European level, were taking place. However, in July 1959 the Nordic governments agreed to strike those plans from the agenda.

This strengthened the desire for a permanent treaty on Nordic co-operation.

The treaty was finally ratified in Helsinki on 23 March 1962, which is why the Nordic "constitution" is known as the Helsinki Treaty.

It states that the Nordic Council should be able to express opinions on the principles of Nordic co-operation.

In 1962, the Nordic School of Public Health (NHV) in Gothenburg was inaugurated.

An agreement on a Nordic Cultural Fund was signed on 3 October 1966. The fund was set up to support cultural projects involving a minimum of three Nordic countries.

In August 1968, the Nordic House in Reykjavik, designed by the Finnish architect Alvar Aalto, was inaugurated.

In 1968, the Danish Prime Minister, Hilmar Baunsgaard, proposed negotiations on Nordic economic co-operation. Planning for this was in full swing by 1969.

The Nordek plan, which was supposed to herald the start of economic co-operation, was finally passed at the Session of the Nordic Council in Reykjavik in February 1970.

On 24 March, Finland made it clear that the Finns would not ratify the treaty.

Due to its close relations with the Soviet Union at the time, it was not in Finland's interests to seek Nordic economic co-operation with potential members of the EEC – i.e. Denmark and Norway.

In 1970, it was decided that representatives from the Faroe Islands and Åland could take part in the Nordic Council – as members of the Danish and the Finnish delegations, respectively.

In 1984, representatives from Greenland were also invited to join the Danish delegation.

The Nordic Council was founded in 1952, following several unsuccessful attempts just after WWII

Efforts to set up a Scandinavian defence union failed when Denmark, Norway and Iceland opted to join NATO in 1949.

In the late 1940s, an attempt to integrate Denmark, Norway and Sweden into an economic customs union also failed.

The Danish Minister of Trade, Jens Otto Krag – who was later Prime Minister for most of the period 1962–1972 – wrote, cuttingly:

“In my office in the Ministry of Trade in Copenhagen I have a cupboard in which I store important documents. In it I have a drawer marked 'Studies and minutes referring to Nordic economic co-operation'. It is packed full. It is bulging with paper. There is no drawer marked 'Results of Nordic co-operation', but if there were then it would unfortunately probably be – not completely empty – but certainly much less packed.”

These fiascos, however, ultimately led to a successful initiative.

The Danish Prime Minister, Hans Hedtoft, at the Nordic Interparliamentary Association's 28th delegate meeting of 13 August 1951, proposed the creation of a consultation body in which Nordic parliamentarians would meet on a regular basis.

The proposal was ratified by Denmark, Iceland, Norway and Sweden in 1952.

Further information about the history of the Nordic Council 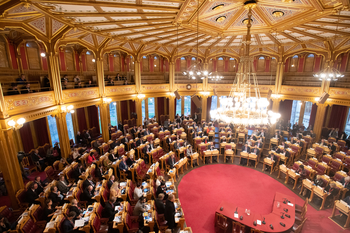 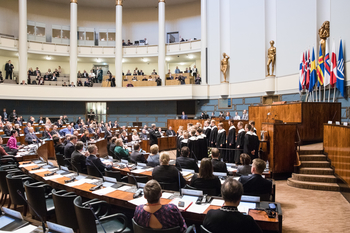 About the Sessions of the Nordic Council

About the Nordic Council President 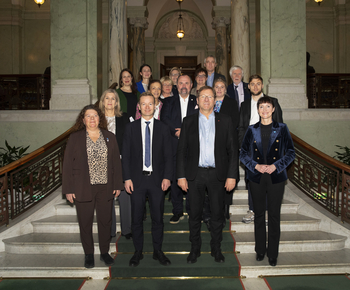 About the Nordic Council Presidium 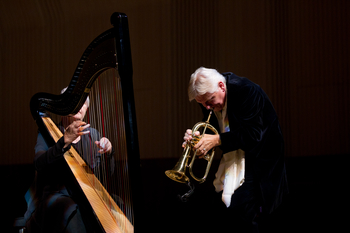