Photographer
Magnus Fröderberg/norden.org
Mail Facebook Linkedin Twitter
The Nordic Council of Ministers was founded in 1971, a year after an attempt to set up a Nordic economic community (Nordek) hit the rocks. In 1972, Denmark and Norway were due to hold referenda on membership of the EEC in 1972, and one of the objectives of the the Council of Ministers was to maintain co-operation even if some of the countries joined the EEC as well.
Pre–1971

The establishment of the Nordic Council of Ministers was preceded by negotiations on multiple levels.

At the Session of the Nordic Council in Copenhagen in February 1971, the Prime Minister of Sweden, Olof Palme, said that: “The road that leads to progress for Nordic co-operation is paved with extravagant failures.”

One result of negotiations on closer economic ties, was a permanent committee of ministers set up in 1960, with an associated joint committee comprising three civil servants from each country. The ministers for development aid started to work together in 1961 and set up their own committee of senior civil servants, an arrangement ratified by a treaty in 1968. Apart from the initiatives mentioned above, co-operation at government level took the form of informal conferences.

The Council of Ministers was set up in 1971, rules were adopted about who was to be involved, jurisdiction and procedures for the various different sectors. The 1962 Helsinki Treaty was amended to ratify the Council of Ministers as the official intergovernmental body in the Region. A number of action plans were also adopted for the individual sectors.

Expansion of the joint Nordic institutions

In 1972, the Council of Ministers decided to set up a Secretariat in Oslo. It started work the following year. The Culture Secretariat was based in Copenhagen at the time. Culture was one of the original priorities for co-operation, and had previously been organised by a Nordic Cultural Commission. On 25 September 1972, Norway voted no to the EEC. On 2 October, Denmark voted yes by a large majority. As mentioned above, the way in which the Council of Ministers had been set up was designed precisely to cope with scenarios like differences of opinion on Europe. Denmark also made every effort to act as bridge builder between the the EEC and the other Nordic countries. In 1973, a number of Nordic institutions were set up, e.g. the Nordic Industrial Fund and Nordtest, which were subsequently merged to form part of the Oslo-based Nordic Innovation.

The Helsinki Treaty was revised again in 1974 to extend formal co-operation to cover environmental protection, which had become a key issue. Pollution in the Baltic Sea and the North Atlantic has subsequently been high on the Nordic agenda.

In early 1975, the prime ministers decided to set up the Nordic Investment Bank. It was not a new proposal but was topical in the wake of the the oil crisis, which had destabilised the Nordic economies. Over the years, the Bank has made annual profits bigger than the total annual budgets of both the Nordic Council and Council of Ministers. The budgets are entirely separate, however, and the Bank is now formally independent of the Council of Ministers and part owned by the three Baltic republics.

In a figurative sense it might, however, be claimed that Nordic co-operation is profitable. Anker Jørgensen, a former Danish prime minister, wrote in his diary on 13 May 1980 about a meeting of ministers in Hamar, Norway: “10am joint meeting of the prime ministers and energy ministers. Only lasted an hour. We quickly agreed on a joint plan for expansion of Nordic energy co-operation. Problems will not arise until a tangible decision has to be taken.” In this instance, one of the tangible problems was whether Norway would allow a gas pipeline to pass through Denmark.

Nothing came of it, but in general the countries have tried to find pragmatic solutions, e.g. the joint electricity grid. Major disagreements have arisen about types of energy, with only Sweden and Finland opting for nuclear power, but the ministers have still managed to work together on a Nordic grid.

The Nordic Science Policy Council started work in 1983. The Oslo-based NordForsk is now responsible for close Nordic collaboration on research.

The Nordic House in Tórshavn on the Faroe Islands was finally completed in 1983. In 1985 and 1987 similar institutions were inaugurated in Åland and in Greenland, where it was named the Nordic Institute. The Council of Ministers was also responsible for Kulturhuset/Katuaq in Nuuk (Godthåb), which opened in 1997.

Since 1986, the Council of Ministers' Secretariat has been a single unit based in Copenhagen, where the Cultural Secretariat had already been located since 1972.

The Nordic Region finds its place in the new world order after the fall of the Berlin Wall.

The fall of the Berlin Wall on 9 November 1989 fundamentally changed the political map of the world, including Northern Europe. The Soviet Union collapsed in 1991.

Even prior to their independence, the Baltic nations had been contacted by the Council of Ministers to discuss setting up information offices there. The offices in Tallinn, Riga and Vilnius were up and running as early as summer 1991.

In 1992, the Council of the Baltic Sea States (CBSS) was set up by the 11 countries around the Baltic Sea. In 1993, the Barents Council was created, followed in 1996 by the Arctic Council. The Nordic Council of Ministers works closely with all of these bodies.

Finland, Norway and Sweden all held referenda on EU membership in 1994. Finland and Sweden voted yes, and joined on 1 January 1995, along with Austria. Norway again voted no. It is probably true to say that politicians and civil servants in Finland and Sweden were focused more on the EU than the Nordic Region for a while after that but Nordic co-operation would eventually be reinvigorated.

It would also become increasingly outward-looking, especially in the Baltic Sea Region. The major upheavals in the period 1989–1991 put an end to previous caution about getting involved in foreign affairs. Focus on the Baltic has occasionally diverted attention away from the West Nordic Region. Contact has, however, been established with neighbouring countries such as Canada and the British Isles.

In 1995, it was decided to set up a Nordic information office in St. Petersburg, Smaller InfoPoints followed in Murmansk, Archangel and Petrozavodsk, as well as a Nordic information office in Kaliningrad in 2006. These offices all had to suspend operations in 2015 when the Russian Ministry of Justice decided to force them to register as non-governmental organisations acting as 'foreign agents'.

In summer 2000, the Øresund Bridge opened, connecting Denmark and Sverige. After a hesitant start, the development of the Øresund Region soon gathered pace. Many people from Skåne found jobs on the Danish side of the Sound, and many Danes found homes in Malmø. This trend led to renewed efforts to promote cross-border freedom of movement, not just in that area but throughout the Nordic Region.

At the EU Summit in Copenhagen in December 2002, it was decided to allow a number of countries in Central Europe to join. On 1 May 2004, Estonia, Latvia, Lithuania and Poland joined the enlarged EU, along with other Central European countries. The whole of the Baltic Sea Region – with the exception of the Russian areas around St. Petersburg and Kaliningrad is now in the EU. The Nordic Council of Ministers has developed contacts with all of the countries in the Baltic Sea Region.

In 2005, Estonia, Latvia and Lithuania became part owners of the Nordic Investment Bank on equal terms with the five Nordic nations.

Further information about the history of the Nordic Council of Ministers: 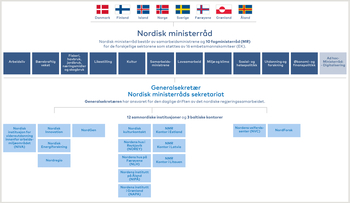 About the Nordic Council of Ministers

About the Ministers for Co-operation 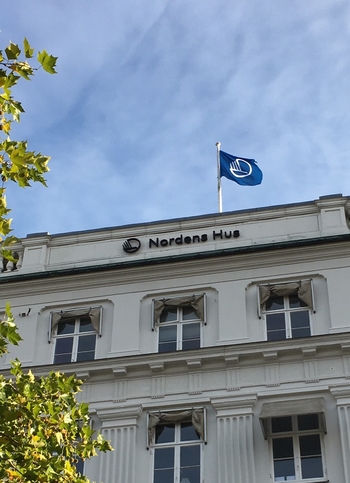