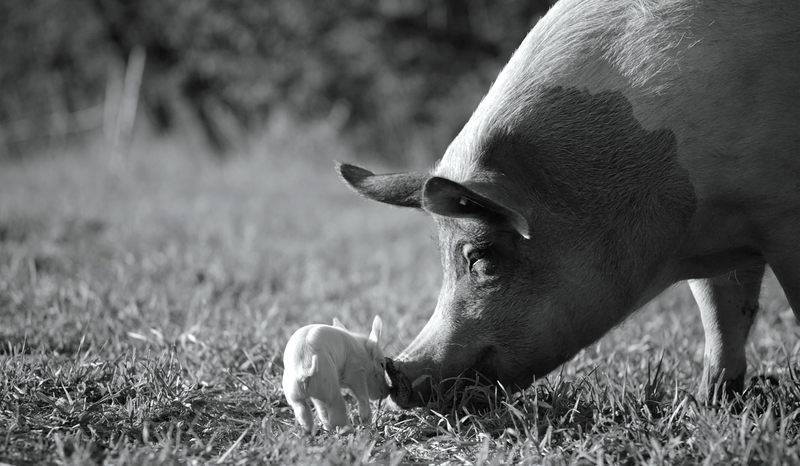 Where his prior documentary Aquarela was a reminder of the fragility of human tenure on earth, in Gunda, Victor Kossakovsky reminds us that we share our planet with billions of other animals. Through encounters with a mother sow (the eponymous Gunda), two ingenious cows, and a scene-stealing one-legged chicken, Kossakovsky recalibrates our moral universe, reminding us of the inherent value of life, and the mystery of all animal consciousness, including our own.

Gunda is one of those rare documentaries that makes you see the world in a new light. Director Victor Kossakovsky brings us out of the human perspective and into an animal world that follows a different logic and slower rhythm. There we meet Gunda, who lives on Grøstad farm in Vestfold with her piglets. In this idyllic existence, the omnipresent brutality in nature is still prominent. A one-legged chicken and a stoic herd of cows serve as the other main characters in a film that is humble towards the animals, but still has a distinct political sting in the tail. Egil Håskjold Larsen’s sharp, poetic images help to make Gunda a great cinematic experience.

Russian-born Victor Kossakovsky (1961) is an innovative and multi-awarded documentary filmmaker. His distinctive filmography spans many different subjects but always explores the interplay of reality and poetic moments. Kossakovsky often serves simultaneously as director, editor, cinematographer and writer in his works. Currently based in Berlin, he continues to work as a teacher and mentor to aspiring filmmakers.

Kossakovsky began his film career in 1978 at the Leningrad Studio of Documentaries as assistant cameraman, assistant director and editor. He studied screenwriting and directing at Moscow HCSF from 1986-1988. In 1989 he directed his first feature Losev and in 1992 made a name for himself with his documentary The Belovs, which won a dozen awards including the VPRO Joris Ivens Award and the Audience Award at IDFA.

In 2011, Kossakovsky’s ¡Vivan las antípodas! was selected as the opening film of the Venice Film Festival and won the Cinematic Vision Award at Silverdocs Festival among others. Aquarela, his technologically ground-breaking and globe-spanning documentary on the shapes of water, also premiered in Venice in 2018 before being shortlisted for Best Documentary at the Academy Awards, among others.

Gunda was selected at nearly 30 international festivals and also shortlisted for an Academy Award.

Norwegian producer Anita Rehoff Larsen (1977) has worked with Norwegian and international directors since 2010. She is co-owner of the production company Sant & Usant with producer and director Tone Grøttjord-Glenne.

Rehoff Larsen studied film and television production at the University of Sunderland in the UK, and further developed her skills as an international producer at EURODOC. Her launch on the global documentary stage came in 2012 with the world premiere at IDFA of both When the Boys Return by Tone Andresen and Bravehearts by Kari Anne Moe. Several acclaimed films are coming of age stories, associated with sports - Dancing for You by Sichen Ai & Erlend E. Mo, Maiko: Dancing Child by Åse Svenheim Drivenes, Varicella by Victor Kossakovsky and the latest documentary Sisters on Track by Corinne van der Borch and Tone Grøttjord-Glenne. The latter is the first Netflix Original Norwegian documentary.

Kossakovsky’s Gunda, executive-produced by Joaquin Phoenix, had its world premiere at the 2020 Berlinale’s Encounters section, and was an instant hit with the audience and critics. The film was sold to more than 40 territories and was shortlisted for an Academy Award.