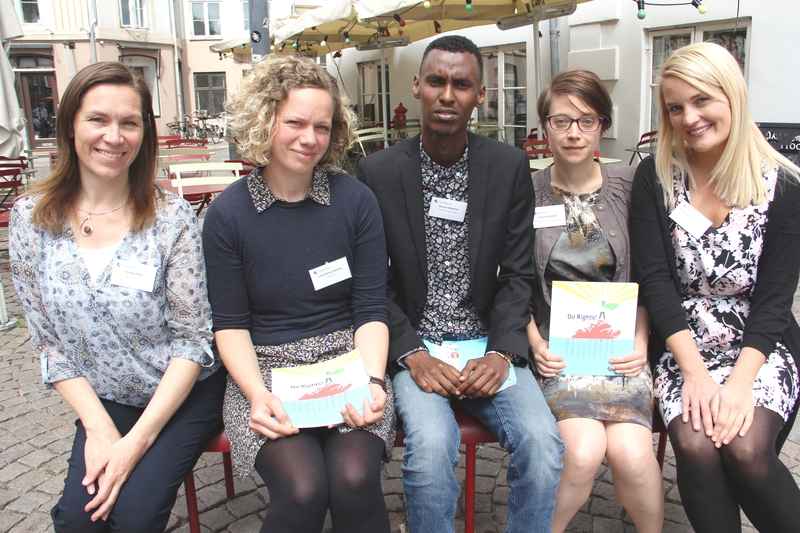 Photographer
Anna Rosenberg
Mail Facebook Linkedin Twitter Sign up to newsletter
The Nordic Committee for Children and Young People has just published the book “Do rights! Nordic perspectives on child and youth participation.” What can be achieved when children’s rights are taken seriously? The question was discussed by a panel when contributors to the book on children’s rights and influence gathered for the launch.

The book “Do rights! Nordic perspectives on child and youth participation” was launched at the Nordic meeting on children’s rights in Copenhagen.

“Do Rights!” consists of nine Nordic examples and a guide. The main target group for the book is adults who are not yet engaged in work on children’s rights.

“Many of the examples show that we have a lot to learn form each other in the Nordic countries,” says Tove Kjellander, project manager for the book.

Danish Pre-school Panel – a voice for the youngest

How do we include the voices of the youngest children in statistical studies? The book describes the answer found by the National Council for Children in Denmark – the Pre-school Panel and its audio questionnaires. The most recent survey was about children and media. What do the children do with the tablets? “We’ve developed audio questionnaires. The child sees symbols on the screen and clicks on the one that represents his or her answer. It’s a brand new way of working with very young children. A thousand children took part in the Pre-school Panel, which means that the answers are representative of what small children think about specific issues,” says Line Emma Jønson, one of the analysts at the National Council.

In Åland, as part of work on a new development plan for the town centre of Mariehamn, Save the Children and Mariehamn Council have been working together and listening to what local children have to say. They conducted a child-impact assessment. Terese Flöjt of Mariehamn Council was one of those who took part in walking tours in the town with the children and young people. “For children and young people, the town is a place where you meet your mates. They wonder why park benches are in rows? Why aren’t they grouped so people can chat? Including children in decision making is neither difficult nor dangerous. It is highly enriching. Remember to play for a while, was one of the things that the adults involved learned.”

The Nordic Council of Ministers' strategy for children and young people calls for support for various forms of organisation and participation in democratic processes in the Nordic Region. Hamza Ibrahim of the Federation of Minor Asylum Seekers in Sweden (Ensamkommandes Förbund – EKF) contributed to the book: “I arrived in Malmö as an unaccompanied asylum seeker in 2010. A year later, myself and other unaccompanied young asylum seekers started a football team. Once we all had personal ID numbers, we set up a local association and opened a social hub along with the city council. We work to create fulfilling, meaningful lives for children and young people who have fled to Sweden. We’d also like to encourage unaccompanied young asylum seekers in other Nordic countries to get organised,” says Ibrahim.

The panels also included Elísabet Gísladóttir of the Ombudsman for Children in Iceland and Young People's Constitution, a project that included children and young people in the process of drawing up a new national constitution. Other Nordic projects featured in the book are Queering Sápmi, which was designed to strengthen the Sámi LGBTQ movement and work on a Sámi queer perspective, knowledge transfer in Greenland, an information project run by the Faroese Youth Council on educational and training opportunities in the Faroe Islands and the project Child Friendly Cities run by UNICEF in Finland.

Interested in learning more about the Nordic children’s rights and influence project?