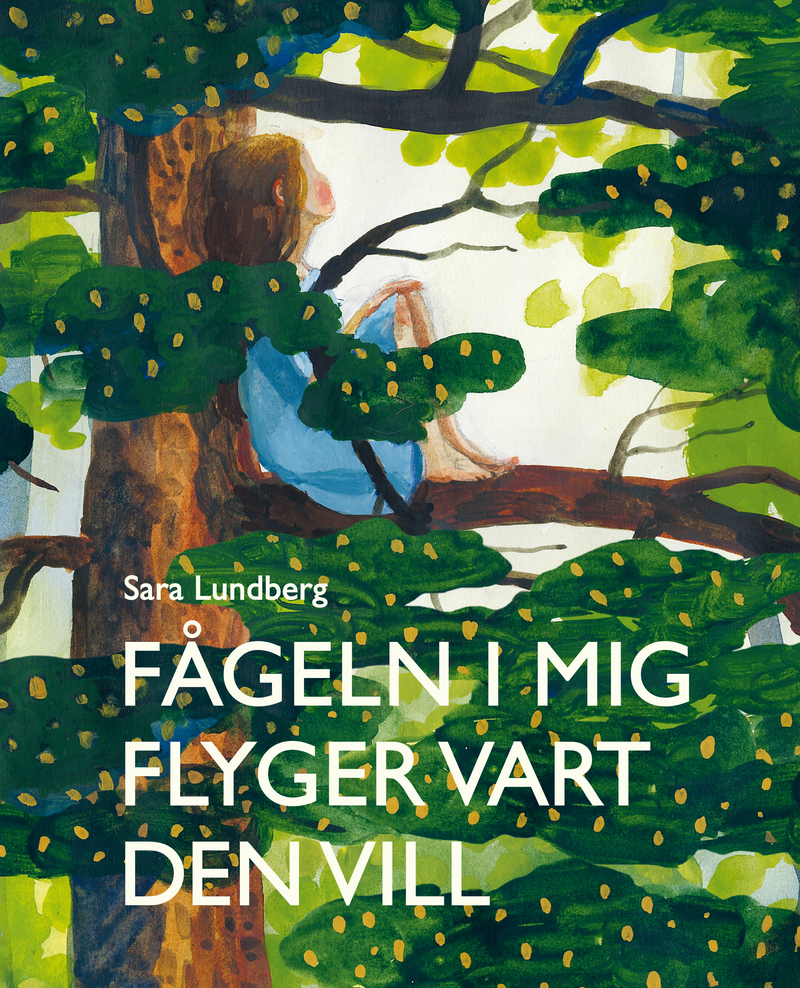 Fågeln i mig flyger vart den vill (in English, “The bird in me flies wherever it wants”) is a biographical picture book about Swedish artist Berta Hansson’s (1910–1994) upbringing in Hammerdal, Jämtland in the early twentieth century. Proceeding from Berta Hansson’s paintings, letters, and diary entries, Sara Lundberg depicts the longing for freedom of a young girl who wants to break away from the demands of the peasant community and go her own way.

Berta grows up on a farmstead. She is the youngest of four siblings. Her father is hard-working, while her mother is bedridden. Berta’s mother is everything to her. She has kind, beautiful brown eyes and is the only one in the family who understands and encourages Berta’s artistic interests. Berta wants nothing more than for her mother to take care of her, but she cannot. The doctor said so. It can be infectious, tuberculosis.

Berta draws to keep her mother alive, to make her better. When she grows up, she’s going to be an artist, but she doesn’t say this too loudly as she knows it’s not a real job ... not for a girl, at least. Her father wants her and her sisters to be housewives, but that’s not what Berta wants. That really isn’t what she wants at all. She’s at peace among the cows in the meadow. She can draw there. Some evenings she sneaks away to the doctor’s house to look at all the paintings on his walls.

Then one morning her mother dies, and in her grief Berta loses faith. She couldn’t make her mother better by painting, so what difference does it make what she does with her hands?

But time passes, and the doctor who shows an interest in art steers Berta towards further studies. Berta’s resistance gradually grows to the life dictated by her father and tradition.

A recurring motif in Berta Hansson’s art is birds. In Lundberg’s story, birds become the symbol of Berta’s longing for freedom, her protest against convention, and the demands for submission dictated by her surroundings. With poetic precision Lundberg describes art’s close connection to life and vitality:

I sneak away to the big ditch again.  The gault shimmers on the bottom. I dig. The clay is formed without me having to decide anything. It just is. And suddenly, a movement against the palm of my hand. The little heart of a bird begins to beat. Wings trying to get free. And I’m scared that I’m holding too tightly, So I open my hands... and it makes a run for it and flies!

The power of fantasy and creativity is also manifest in Lundberg’s pictures, where a harmonious collage of blocking and water-based techniques offers fresh painting and a powerful palette that radiate both melancholy and refractory simplicity. This is an aesthetically pleasing book, both beautiful and thoughtful in its design. The epilogue by the cultural journalist and author Alexandra Sundqvist adds a further dimension to the piece of women’s history depicted here.

The artist and author Lundberg was educated in Sweden and the US and has had exhibitions at art galleries in Sweden and several other European countries. She has been awarded numerous literary prizes in Sweden for her picture books, and in 2014 she was included in the IBBY Honour List. Fågeln i mig flyger vart den vill has been awarded the prestigious August Prize as well as the Snöbollen Prize for best picture book of the year. Lundberg was previously nominated for the Nordic Council Children and Young People’s Literature Prize for Vita streck och Öjvind in 2011.