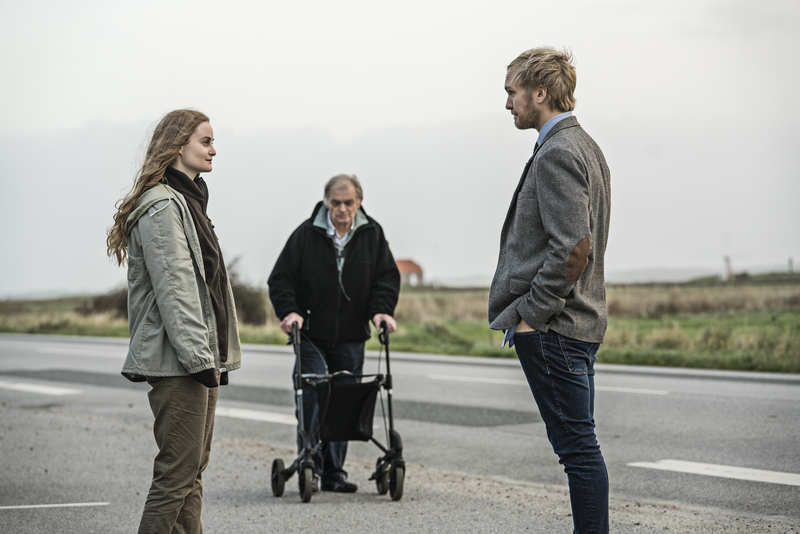 Kris lives with her partly disabled uncle in rural Denmark and together they run a small farm. In their quirky yet loving relationship built around daily routines, words aren’t necessary. Kris is the dominant workhorse and she has taken on a motherly and overprotective role towards her uncle. When Kris saves a calf during a complicated birth, her interest in the veterinary field is reawakened. She develops a friendship with the chatty veterinarian Johannes and slowly experiences life outside the farm. As love crosses her path, a possible life-changing question emerges.

In Uncle everything is small – not understood as insignificant, indifferent, trivial, or banal but as general, local, humble, and pure. Uncle sees the bigger picture in the small things. In the context of cinema, a young woman’s dreams of experiencing the world while feeling tied to the disabled and lonely uncle who brought her up is a situation that certainly belongs to the department of small things. However, Uncle hits upon the big feelings in one of life’s many small choices in a way that is incredibly pure, namely pure-heartedness. Using no movie stars, only amateurs, and speaking an obscure dialect on an ordinary farm in a forgotten corner of remote southern Jutland, director Frelle Petersen tells a story that has the power to tug at the heartstrings of the world.

Frelle Petersen, born in Southern Jutland in 1980, is a self-taught writer/director/cinematographer and editor. As a teenager, he started experimenting with images and storytelling using his father’s camcorder. His stories focus on family relations and human interactions. He started out in the film industry as an assistant director in 2003 and learned his craft by watching other directors such as Peter Schønau Fog (The Art of Crying), Tobias Lindholm and Michael Noer (R). He then wrote and directed several short films before making his feature-length debut with Where Have All the Good Men Gone (2016), which screened at the Seattle International Film Festival and Zlín Film Festival. Uncle is his second feature film. The realistic drama set in rural Denmark had its world premiere at the Tokyo International Film Festival 2019 where it won the Grand Prix. It went on to win the Politiken-Best New Director Award at CPH PIX and the Audience Award at the Kosmorama Trondheim Film Festival, among others. Petersen’s third feature film, Resten av livet, will be produced by Zentropa. Petersen co-founded the company 88miles with producer Marco Lorenzen.

Marco Lorenzen (born 1976) has worked in the Danish film industry since 2005 in various capacities, including production manager and location manager, notably on television series such as DR’s Emmy Award-winning show The Protectors, for which he also worked as line producer.

He produced Frelle Petersen’s short film Mommy (2013) and both went on to make their first feature-length film together, Where Have All the Good Men Gone (2016), selected in competition at the Seattle International Film Festival. Lorenzen then produced Petersen’s breakthrough film Uncle (2019), winner of the Tokyo Film Festival’s Grand Prix. He is co-founder of the production company 88miles with director Frelle Petersen.