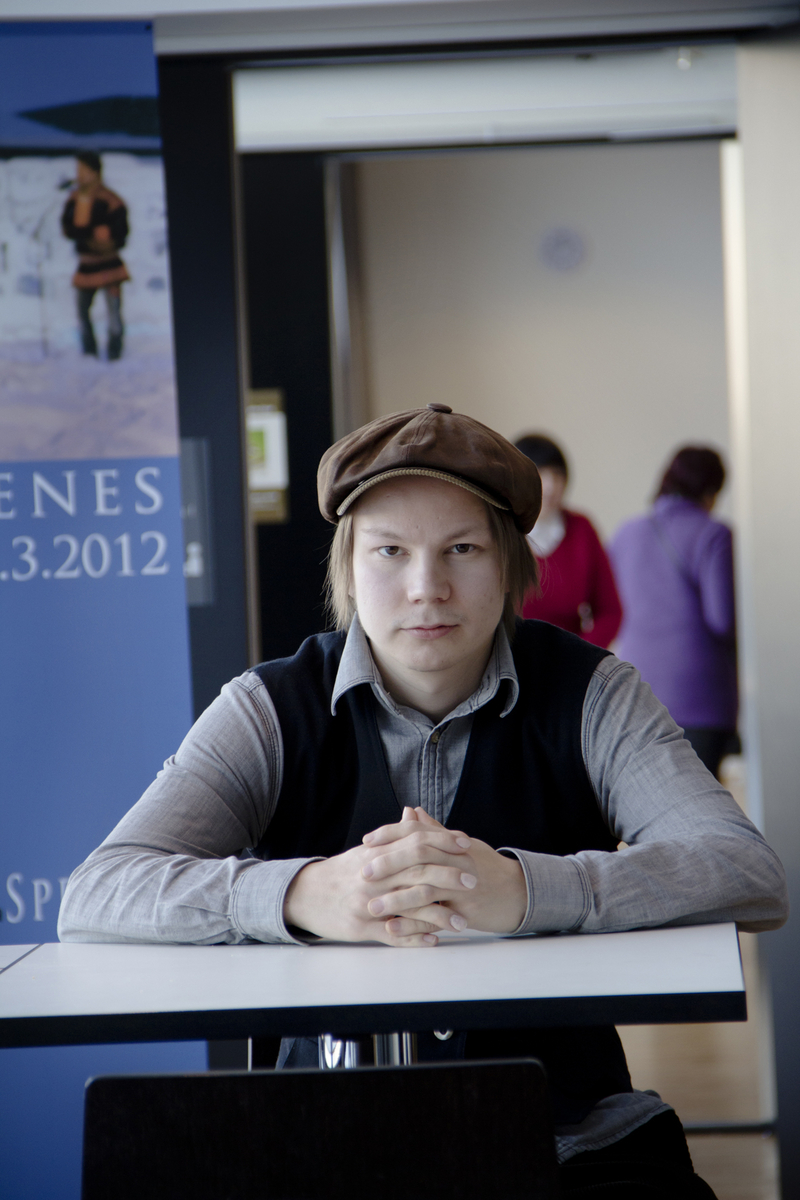 Born in 1990, Niillas Holmberg comes from Ohcejohka/Utsjoki in Finland and despite his young age he has developed a diverse oeuvre. In 2009 he débuted as an author with the poetry collection Dego livččen oaidnán iežan and in 2010 he débuted as an actor, playing the lead in the play Allaq at the Beaivváš Sami National Theatre. His début as a musician and recording artist followed in 2011 with the album Manin guottán girjji fárus. Since then he has developed all three bodies of work. His second book, the collection of poems amas amas amasmuvvat(in English “not to the strange alien shall be made”), won the Saami Council’s Literature Prize in 2014

and features autobiographical traits in which a lyric “I” called Niillas is the leading voice. The book is divided into five sections and follows Niillas through various phases while exploring artistic and Sami identity. The five sections each follow their own themes, which culminate in a broad whole in which the poetic form and expression go back and forth, with the epic lyric at one end of the spectrum and concise poetics at the other.

The book opens with Niillas considering his own place in the whole, his place in his family, his place in society, his place in a global artistic reality. This raises questions about what it means to be a young Sami, about the significance of external pressures on and opportunities for Sami youth as a whole and as individuals, about the significance of internal pressures – from the surrounding community, from family, from oneself – and about what it means to be a Sami artist in such a context, in which both the intimate and global can be expected to be present, and are present, both in life and art. In the fifth section the book concludes in an appeal to Sami youth to stand firm, to take the Sami story further, and to reinvent it. It sounds unequivocal, but it is not.

Holmberg represents a new type of Sami artist who grew up in the superglobal information society, with all its implications. The poems in amas amas amasmuvvat take seriously the schizophrenic societal experiences of young people, and Holmberg treats these with prudence and sensitivity. His voice is distinctive and has a power and flow that he displays with precision throughout the different modes of the book. The poems are linguistically very intense, playful, and varied, and evidence a high degree of linguistic accuracy. Holmberg has emphasised picking out and using old Sami words that are about to disappear from use, thereby giving these types of words new vitality and new content by putting them into new contexts.