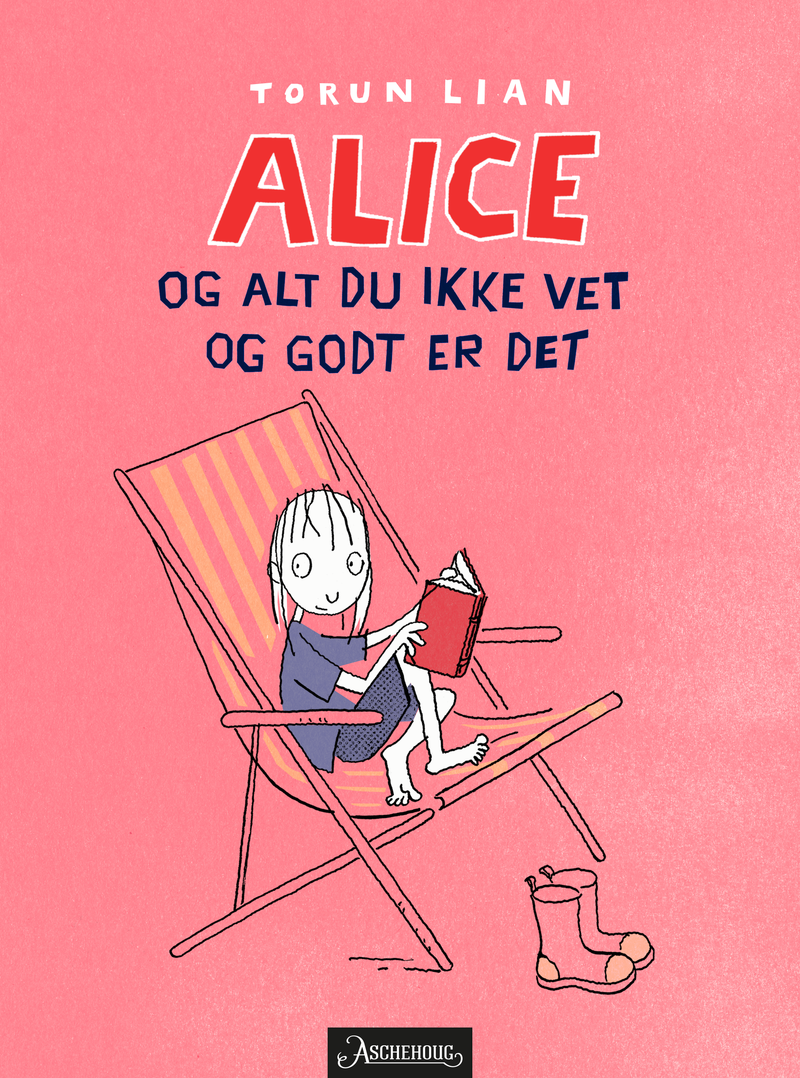 Alice Andersen, 8, is not like the other members of her family. She is shy, speaks quietly, and thinks a lot. Small day-to-day challenges easily escalate into major disasters. But such a temperament gives her a special perspective of the world. Like when one summer’s day she is on her way to the shop and realises that the future is stretching out endlessly in front her, like a huge flower meadow. Yet she shows courage in situations that others would not, such as walking alone into the woods. And feeling confident enough to go around in wellies, even when it’s hot and sunny.

Alice observes and reflects on what she senses and on her own reactions in language that can not only be beautiful and philosophical but often has a hint of humour or self-irony. One day, however, she suddenly feels a gnawing in her stomach that she can’t quite define. It has to do with a big boy named Thomas. Thomas also wears wellies when it’s hot. He makes her even more shy than before, but he doesn’t care. And suddenly she sits on a pier and dangles her legs over the side, and finds it within herself to talk about everything.

This is a rare, nuanced portrait of an introverted girl. It’s also a unique tale about unexpected love in early childhood – a time when we think love is pretty embarrassing to think about. In her very special way, the author gives Alice a language to express joy and fear simultaneously – joy for all that exists, and fear that it may all fall apart – and that you can feel whole and empty at the same time. And that everything you don’t know about the future can be terrifying to think about, yet perhaps it is best not to know. The best thing about the future is that it is open.

This is the fourth book about Alice Andersen. Alice og alt du ikke vet og godt er det (in English, “Alice and everything you don’t know, and that’s just as well”) both recaps and expands on the story of the earlier books. In this latest book, Alice appears stronger and more self-aware than before. And when she ventures outside her comfort zone, she finds that she can be seen and understood.

Lian (born 1956) is an author, dramatist, and film director who has received a number of Norwegian and international awards for her work. She gained many young readers with the books Frida (1990), Frida – med hjertet i hånden (1991), and Bare skyer beveger stjernene (1994). In her book for children and young people Adam den tredje i fjerde (2005), she again demonstrated her ability to embrace the thoughts and feelings of children. Lian’s books about Alice Andersen are the first she has written for younger readers. The first book, Alice Andersen, was published in 2014 and was followed by Reserveprinsesse Andersen in 2015, for which she won the Brage Prize. She won the Norwegian Ministry of Culture’s literature prize for Alice svømmer ikke(2016). Øyvind Torseter won the illustration prize for his illustrations for the book.