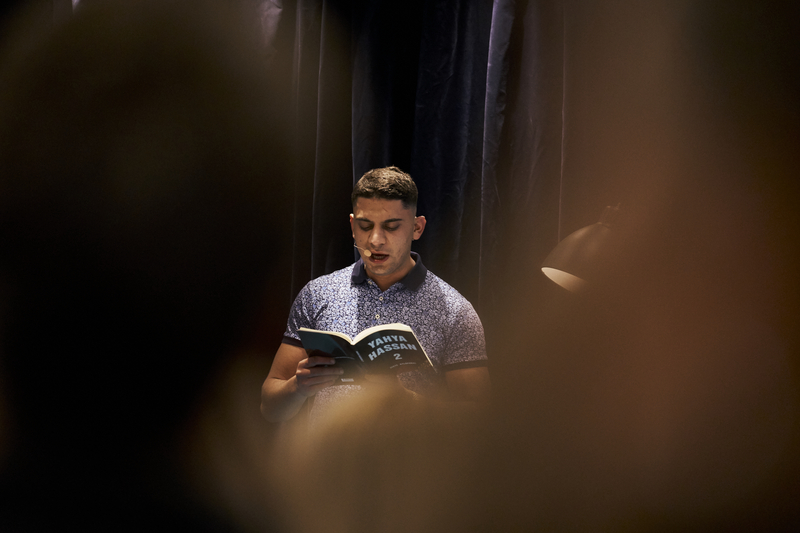 When Yahya Hassan made his debut in 2013 with the poem collection YAHYA HASSAN, it was with a bang that was heard far beyond the borders of Denmark. The young “stateless Palestinian with a Danish passport” (as how the author presents himself on the cover of the book) spoke with a penetrating and wildly poetic voice from an exposed and raw spot, from which we rarely hear: From a childhood on the periphery of society, where violence in all its forms – systematic, random, personal – is the order of the day. The first book demonstrated that Yahya Hassan is a master of various vantage points and the voices that belong to them. And that he has the word – poetry – in his power, despite the powerlessness that otherwise prevails in the environments that are furthest from the ideas of the ruling classes about what the good life is or ought to be.

Now, six years later, the sequel YAHYA HASSAN 2 has been published, which fully confirms that Yahya Hassan is a singularly powerful voice in Nordic contemporary poetry. The poems are still autobiographical, direct and merciless – both towards the readers and towards the ‘I’ of the narrator. And they are still infused with the strange oral rhythm that was also the guiding poetic principle in the debut collection. It is simply essential to read all the poems aloud: ARE YOU A POET ASKS THE OFFICER / YOU’RE A CROOK SAYS THE OFFICER. There are hip-hop-like puns: MY WORLD IT ISN’T VIOLENT / JUST VIOLENTLY DESPERATE. There are wonderful images: SO GET OFF THE ROAD / AND RUN INTO THE FIELDS / WHERE THE COMBINE HARVESTER RUNS. And in the midst of the all-encompassing violence, a bubbly, energetic humour can suddenly reach out to the reader: NO-ONE KNOWS ME BETTER / THAN MY OWN POLICE DISTRICT. The perspective of the new book is more far-reaching than in the debut collection. The texts link local violence with global violence. A direct link is identified between locally experienced discrimination and racism and geopolitical conditions. And suddenly, it is not that far from Aarhus to Gaza. YAHYA HASSAN 2 is no ordinary book and it does not mollycoddle the readers. It is a burning testimony. A voice that wants to be heard. And precisely because it speaks the language of poetry, it will be heard.

Yahya Hassan passed away on 29 April 2020 at the age of 24. He was pleased to have been nominated for the Nordic Council Literature Prize. The prize may be awarded to him posthumously when the winner is announced in October 2020.