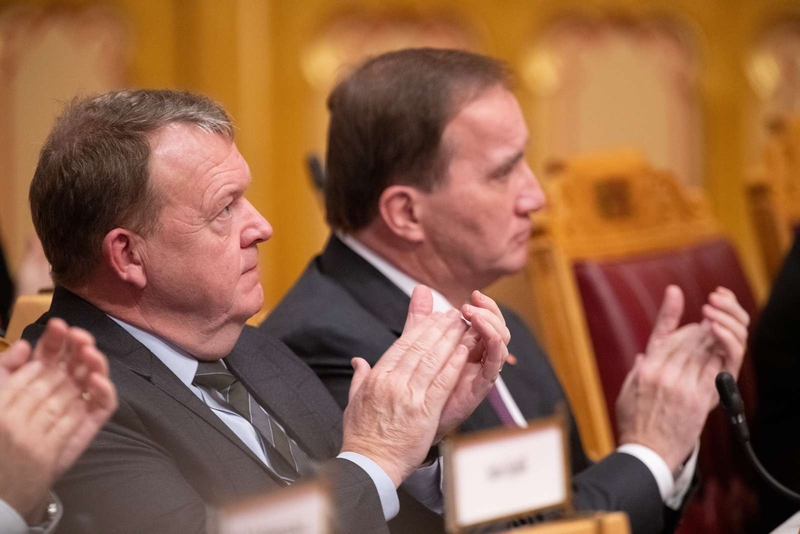 Photographer
Johannes Jansson
Mail Facebook Linkedin Twitter Sign up to newsletter
Fake news, hostile campaigns, denial-of-service attacks – digitalisation has a dark side.  The prime ministers spoke about the importance of protection against cyber threats that undermine democracy, and members of the Nordic Council called on them to support public-service broadcasting and social equality.

The Session of the Nordic Council started with the annual summit of the prime ministers and the MPs who sit on the Council.

The theme of the debate was digital threats to the open society.

“Democracy is deep-rooted in the Nordic Region but recent trends show that progress should never be taken for granted. The social climate can quickly turn bitter and cold. We have seen attempts to influence free elections,” said Stefan Löfven, the Prime Minister of Sweden at the start of the summit.

He was referring to hostile activities during the Swedish general election in September – online attacks, denial of service attacks and widespread use of trolling accounts.

He suggested that the Nordic countries ought to coordinate their national security strategies.

European Centre of Excellence for Countering Hybrid Threats in Helsinki

The Prime Minister of Finland, Juha Sipilä, invited the other countries to join in the work of the European Centre of Excellence for Countering Hybrid Threats in Helsinki, which specifically addresses cyber attacks and the spreading of false information.

However, he also stressed that it is up to politicians to counteract the trend promoted by these attacks of conflict, polarisation and lack of trust.

“Waves of refugees and migrants arouse strong feelings, which populists seek to exploit. We need to communicate our values even more clearly,” he said.

The Prime Minister of Norway, Erna Solberg, pointed out that one of the challenges is to protect against these types of attacks without fostering a climate of paranoia.

“We have found it valuable to promote dialogue with business, the people who own the infrastructure. But we also need to engage with the general public and not leave the debate up to the comment pages on social media,” he said.

A well educated population with access to reliable news, e.g. from public-service broadcasters, is the best protection for the open society, according to Aksel V. Johannesen, the Faroese PM.

Several of the MPs who sit on the Nordic Council pointed out that the threat to democracy is not just external. Martin Kolberg of the Social Democratic Group wanted to know whether the Danish Prime Minister thinks that social division has a negative impact on trust in the democratic system.

Jessica Polfjärd (Conservative Group) pointed out that the Nordic Region has not been immune to the general trend to prefer nationalism to internationalism and called for initiatives to encourage free trade.

Gunilla Carlsson of the Social Democratic Group questioned the cutbacks at the Danish Broadcasting Corporation, and Lorena Delgado Varas of Nordic Green Left questioned the Danish ghetto strategy, which is designed to counteract the proliferation of parallel communities in Denmark.

“The ghetto plan is about dealing with challenges that we could avoid talking about but which we in Denmark prefer to address openly,” Lars Løkke Rasmussen responded.