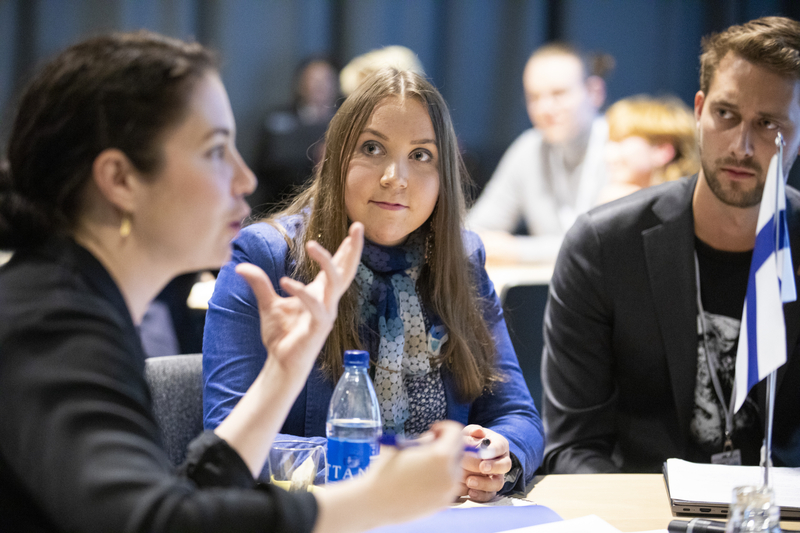 Photographer
Ninni Andersson
Mail Facebook Linkedin Twitter Sign up to newsletter
Stop supporting fossil fuels and get behind a new international law against large-scale environmental crimes! These are just two of the demands from Nordic and Baltic youth movements, which were handed over to and discussed with Nordic ministers for the environment and climate at a roundtable discussion at the Stockholm+50 UN meeting.

“The Nordic countries are extremely rich and have ecological and climate footprints that are far too large. It is abhorrent that Sweden and the other Nordic countries continue to subsidise and support fossil fuels,” said Björn Fondén from the Stockholm+50 Youth Task Force when he opened the meeting.

Over a six-month process, 60 recommendations have been drawn up by youth organisations in the Nordic and Baltic countries, and young people hope that their policy paper will go on to form part of the official outcome of the UN meeting.

The process has been funded by the Nordic Council of Ministers as part of a broader effort to involve young people.

At the roundtable discussion on 1 June, youth representatives set the agenda for dialogue with the Nordic ministers for the environment and climate, Annika Strandhäll from Sweden, Lea Wermelin from Denmark, Espen Barth Eide from Norway, Emma Kari from Finland, Alfons Röblom from Åland, and the Secretary General of Nordic Council of Ministers Paula Lehtomäki.

At four tables, the ministers and young people discussed the Nordic countries’ responsibilities in helping developing countries to finance their green transition, to phase out fossil fuels, to create alternative ways to measure development alongside GDP, and to work to combat international environmental crime.

“We should be able to trust politics”

Lea Wermelin summed up the discussions as follows:

“I’ve understood that the main message from young people today is that not only are structural changes needed in order to address the climate and nature crises, but also policies, laws, and agreements. The fact that you have confidence in the UN gives me hope, and we must show that politics can be trusted. But we won’t be able to do this without you,” said Lea Wermelin in her address to the youth organisations.

Ecocide crime to be discussed at Nordic level

Paula Lehtomäki, Secretary General of the Nordic Council of Ministers, said that the issue of ecocidal crime – the criminalisation of large-scale environmental crimes – would be discussed at the Nordic level.

“We will put this issue on the agenda, and together discuss what we can do within this sphere,” said Lehtomäki.

Annika Strandhäll emphasised the value of young people’s knowledge and perspectives on environmental and climate work.

“Seen globally, the Nordic youth movement has played an important role in the inclusion of a youth perspective in the process and in the forthcoming outcomes of Stockholm+50,” she said.

“Lead the way in phasing out fossil fuels!”

After the meeting, Björn Fondén from the Stockholm+50 Youth Task Force was in two minds about the ministers’ response:

“The most important outcome is that ecocide crimes will be discussed at the Nordic level. It was also positive that the ministers acknowledge that they don’t know everything, and that they’re prepared to listen to us.

“On the other hand, I don’t really think that they’re tackling the phasing out of fossil fuels. The countries of the world must work together to put in place a plan for phasing them out, and these efforts should be led by the Nordic countries,” said Fondén.

In the run-up to the Stockholm+50 UN meeting, Sweden’s youth organisations, LSU, and Sweden’s Minister for the Environment and Climate Annika Strandhäll hosted a roundtable discussion with other Nordic ministers. The agenda was determined by LSU.

The Nordic Council of Ministers was represented by Secretary General Paula Lehtomäki.

A youth project on biodiversity has been used as a model for the process of producing a Nordic and Baltic Youth Policy Paper for Stockholm+50.

The Nordic Youth Position Paper on Biodiversity was published following two years of co-operation between youth organisations from across the Nordic Region.