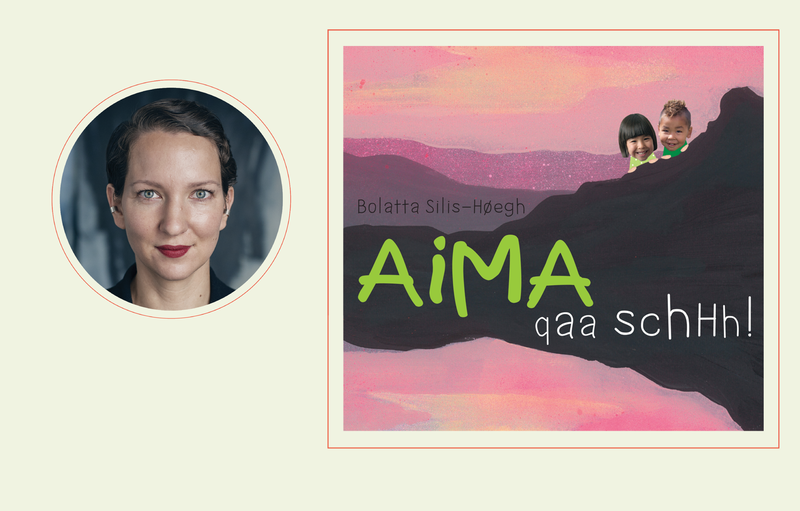 Aima qaa schhh! is a 32-page picture book primarily for children aged 4 to 7.

Aima is a happy and imaginative girl. One night she is struggling to fall asleep. She finds herself an invisible friend, Mannarsi Pandetage Isbo Sodavagn Chokolarsen, or Manna for short. He entertains Aima by telling her stories, singing opera, and playing with her, although she really ought to be sleeping. Despite her parents’ best attempts to get Aima to sleep, the hullaballo carries on for three nights until Aima’s wise mother becomes aware of Manna’s existence and sets a place for him at the breakfast table.

It’s odd that Aima has an invisible friend. And it’s odd, too, what Manna eats – porridge with milk and cucumber and a few nails!

The story is told vividly and imaginatively, with ample wordplay. The author has used acrylics, drawings, photo-collage, and graphic strokes of spray paint to illustrate the book. The dream-like colours and collages of Aima and Manna and their composition stand in stark contrast with the pastel watercolours of Aima’s fantasy world.

Invisible friends are nothing new to children’s literature. In this marvellous book, the invisible friend represents a child’s need to be considered in his or her own fantasy world. It’s an ideal book to read aloud to children, and it provides the opportunity to discuss topics such as norms and values.

The author and illustrator, Bolatta Silis-Høegh, is a visual artist who graduated from the Aarhus Academy of Fine Arts. She was born in 1981 in Qaqortoq and has participated in many group and solo exhibitions in both Greenland and Denmark. Her previous book, Aima, is about a girl imagining what she will be when she grows up.