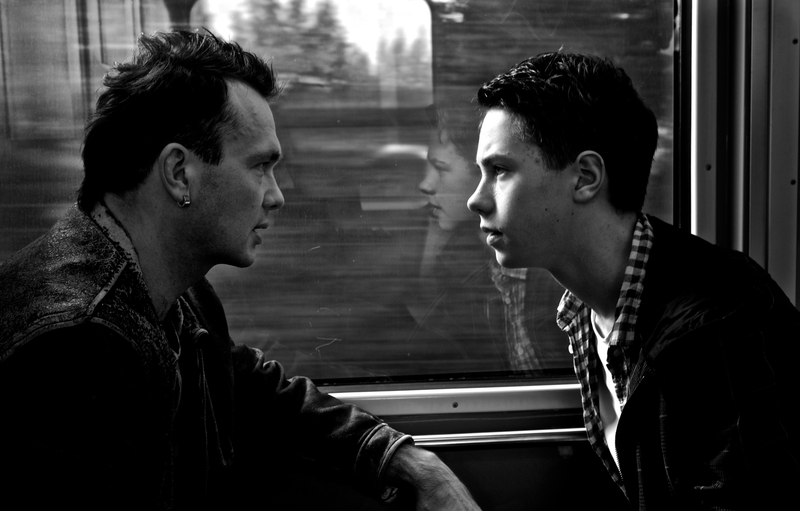 Concrete Night is a dreamlike odyssey through the fragile mind of a young boy as he loses his innocence.  The film opens in a cramped, concrete-jungle home. Ilkka, the elder of two brothers, is leaving to serve a prison sentence. During his last 24 hours of freedom, he and his vulnerable younger brother Simo explore the events that sealed Ilkka’s fate.

Pirjo Honkasalo’s Concrete Night explores how relatively small private disturbances at an early age can lead to great tragedies. The black-and-white photography turns the urban landscape into a dreamlike, timeless no man’s land. As a filmmaker, Honkasalo is always meaningful, but never obvious.

Pirjo Honkasalo was born in Helsinki in 1947. She studied cinematography at the University of Art and Design in Helsinki (TAIK) and has a Master’s in Film Studies from Temple University in Pennsylvania. In the 1970s and ’80s, she directed several feature films together with Pekka Lehto, including Flame Top, which was selected for Cannes’s official competition in 1980. In the 1990s, she continued on her own and turned to feature documentaries, directing the prize-winning The Trilogy of the Sacred and the Satanic, of which the last part, Atman, won the Joris Ivens Prize at IDFA 1996. Her film The 3 Rooms of Melancholia won numerous awards, including a FIPRESCI prize at the Thessaloniki Documentary Film Festival. She then directed Ito: A Diary of an Urban Priest, which was shot in Tokyo.

Born in Helsinki in 1949, Pirkko Saisio is one of Finland’s most well-known authors. She has received five nominations for the Finlandia Prize, the most prestigious literary award in Finland, and won the coveted prize in 2003 for her novel The Letter of Farewell. Her novels have been translated into Swedish.

Saisio is also a trained actor and a renowned playwright. Her adaptation of her novel Concrete Night(published in 1981) has been staged in Peru, Venezuela, Sweden and Finland.

Born in 1976, Mark Lwoff graduated in 2006 with a BA from Aalto University’s Film Department. He is one of Finland’s most experienced producers, amassing knowledge in film production by working first as assistant director and then as a production manager. In 2007, he founded the production company Bufo with producer Misha Jaari and scriptwriter Vesa Virtanen. The company’s first feature-length film, The Interrogation (2009), by acclaimed Finnish filmmaker Jörn Donner, won a Jussi award for Best Actress (Minna Haapkylä).

The Good Son, by the talented Zaida Bergroth, won more than a dozen international awards and was nominated for the 2011 Nordic Council Film Prize.

Among the upcoming talents on Bufo’s roster is Akseli Tuomivaara, whose feature debut Korso will have its world premiere in Edinburgh 2014.

Lwoff is currently working on the young director’s next project, the sci-fi adventure film White Point, and also producing the black comedy The Swedish Moment.

Actively involved in European projects, Lwoff and his production partners in Bufo have co-produced the Estonian 3D stop-motion animation film Lisa Limone and the Russian film The Role by Konstantin Lopushansky.  Lwoff was named “Producer on the Move” at Cannes 2014.

Misha Jaari was born in 1972. He received a Bachelor in Business Administration from Helsinki School of Economics and a BA from Aalto University’s Film Department.

In 2013 Jaari produced the multi-award-winning Concrete Night by cinematographer/director Pirjo Honkasalo and co-produced the Estonian 3D stop-motion animation film Lisa Limone and the Russian film The Role by Konstantin Lopushansky.

In 2014 he produced Akseli Tuomivaara’s feature debut Korso, and is currently preparing his next feature, the sci-fi adventure film White Point.