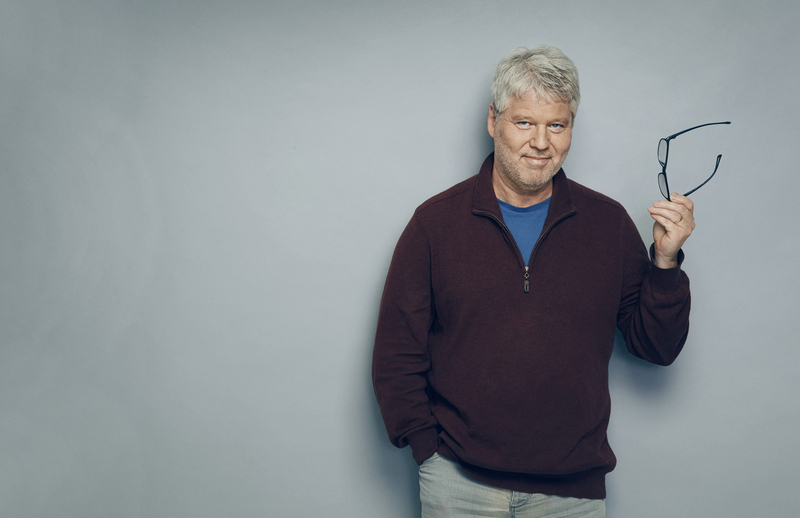 Og svo tjöllum við okkur í rallið: bókin um Thor is a tricky title to translate which can be loosely rendered as: “This is how we trundle, blunder, and roll”. It is about Thor Vilhjálmsson, one of Iceland’s most prominent twentieth-century avant-garde writers. Vilhjálmsson (1925–2011) won the Nordic Council Literature Prize in 1988 for the novel Justice Undone.

But this is not so much a biography as a book – interpretations of memories and impressions. Guðmundur Andri Thorsson finds photos of his father, letters and papers from his archives. He takes a look around his father's office, packed with books and magazines with all manner of associations. At first he tries not to forget, to hold on to the kind of memories that soon disappear – “into the light”, as he puts it.

He tells the story of how as a child he sat on his father’s shoulders – a “benevolent giant” at the service of the boy. But at this point the author wants to link back to the loss: the disappearance of this major force from his life. At the same time, the author does not hide the fact that, for those around him, Vilhjálmsson may well have been a difficult and demanding figure. He was temperamental, argumentative, and touchy. His works – in the style of European modernist literature – did not meet with any great appreciation. Vilhjálmsson was a true European who admired French and Italian culture, literature, and film: a citizen of the world in a rather narrow-minded country.

One could write a great biography of Vilhjálmsson and his role in cultural life, his faith in the value of culture, his sublimity and pomposity, the controversy he became embroiled in, and his poetic experiments which did not always succeed. But this book is no such biography. Og svo tjöllum við okkur í rallið: bókin um Thor is a sincere, personal book that portrays our common human longing for our origins, our childhood. The text makes us aware of that turning point when we begin to realise that our parents are far from flawless. Although Thorsson has written an affectionate and loving portrait of his father, he does little to protect him. He tells us of his faults – it wasn’t always easy being the son of a man who was larger than life. The portrait of Thorsson’s mother, Margrét Indriðadóttir, is unforgettable. One of Iceland’s leading journalists and news director of Islands Radio, it was down to her to clear the way for Vilhjálmsson to write, to see to his needs, to type up his manuscripts, and do the housework. Not only was she a gifted working woman with a full-time job, but she had to encourage her husband’s alleged genius.

Thorsson, born in 1957, is a master stylist of Icelandic. His command of language is unparalleled – there are few who can write as balanced and elegant a text. Guðmundur Andri’s prose is always a gem, regardless of what he is writing about. His stylistic ingenuity has never revealed itself so well as in this concise and engaging book.

Thorsson has seven novels to his name. His latest work, from 2016, is a haiku collection. Thorsson has also written incisive essays on literature and edited the literary journal TMM. He is particularly well known for the columns on public affairs that he has written for more than 20 years. He is an active social commentator who does not shy away from voicing his opinion.