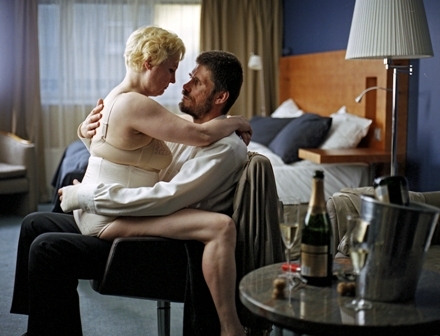 Mail Facebook Linkedin Twitter
'A Man´s Job' is Aleksi Salmenperä´s second feature film after the award-winning 'Producing Adults' (2004). It tells the story of Juha, a father of three children, married to Katja who suffers from depression. The day he gets fired from his job, he feels ashamed and decides to keep it secret. He starts spending his days at a remote service station thinking about a way out. One day he gets a special offer from a woman customer!

Soon the desperate Juha finds himself completely naked, earning in two hours what he used to earn in two days. With the help of his friend Olli, Juha becomes a male escort and sells his body in earnest. Juha´s shame and lies grow, but the money helps him cope with the downside of his new profession.

"This was the first script I wrote totally by myself", says the filmmaker. "I've always been interested in the notion of humiliation and the feeling of shame, mostly in men. I was also inspired by my own experience as a father of three who has to provide for his family".

"At the beginning, I wanted to write about a group of men who become escorts, but then I thought it would be too comical, and decided to concentrate on one male character. I wanted to describe why so many tragic things happen to this character".

"Even in 'Producing Adults', the notion of shame is present in some form, but as it was my first film, I felt under pressure to please the audience and ended up making a nice and cute film. But the success of 'Producing Adults' has given me the confidence and the courage to be more honest with my second film".

"Casting Tommi Korpela as Juha was crucial. He was the only one who understood the script the way I wanted it during the casting. He knew the balance between drama and comedy and I didn´t have to drag things out of him".

'A Man´s Job' was released by Sandrew Metronome in Finland last February and sold over 50,000 tickets. Internationally, the film had its premiere at the Rotterdam Film Festival last January and won the Golden Moon at the Cinema Jove Festival in Valencia, Spain in June. The film is on the selection list for the European Film Awards nominations 2007.

Born in 1973, Salmenperä studied filmmaking and screenwriting at the University of Art and Design in Helsinki and graduated in 2003. He directed several short films including the award-winning 'Ferry-go-Round' ('Onnenpeli') in 2001.

For television, he directed 'Free Fall' ('Vapaa pudotus') in 2001 and 'The Road to Eden' ('Tie Eedeniin') in 2003. His first feature film 'Producing Adults' was an instant hit both domestically and internationally. It was selected as Finland´s Oscar nominee in 2004 and was sold to over 15 territories by Celluloid Dreams. 'A Man´s Job' is his second feature film.

Born in 1965, Petri Jokiranta graduated in 1996 from the National Film School in Helsinki where he studied production. At the same time, he also studied Theatre Research at the University of Helsinki.

Between 1996 and 2000, Jokiranta was Production Consultant at the Finnish Film Foundation. During that time, he financed over a hundred film productions including short films, documentaries and features.

During that time he produced several features including the epic film 'Jade Warrior' by AJ Annila and 'A Man´s Job' by Aleksi Salmenperä. Since January 2007, Jokiranta has worked as a freelance producer with several feature film projects.

Born in 1960, Tero Kaukomaa studied business, marketing and economics at the Helsinki School of Economics, from where he graduated in 1987.

After producing hundreds of commercials and some music videos for Elohopea Film (1989 - 1991) Kaukomaa started to produce short and feature length films.

In September 1997, Tero Kaukomaa set up Blind Spot Pictures, which he co-owned with Petri Jokiranta between 2001 and 2007. Since 2002 he is based in Zürich, Switzerland where he runs Blind Spot Zürich. He is also responsible for international affairs for the new Helsinki-based production outfit Bronson Club.