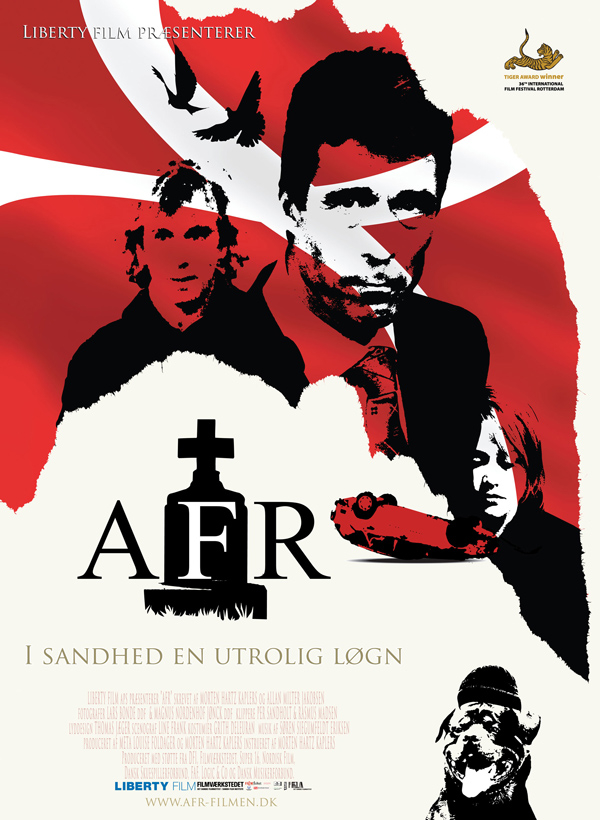 Mail Facebook Linkedin Twitter
Co-winner of the top prize or VPRO Tiger Award at the last Rotterdam International Film Festival, 'AFR' was described by the jury as a "well-crafted polemical film, which utilizes a conceptual approach that comments on the blurring of reality and fiction".

For his directorial debut, Morten Hartz Kaplers felt compelled to make a film that would steer controversy and make people reflect.

"I once recorded a Scandinavian writer who said: "if there is something that scares you because it can threaten democracy or destroy your life, then you have to write about it. Because then, you are on to something important. This stayed with me, and made me make the film", said Kaplers.

In 'AFR' (the initials of Danish Prime Minister Anders Fogh Rasmussen), Morten Hartz Kaplers has mixed footage from his own childhood, documentary shots and interviews from leading politicians (including Kofi Annan, Romano Prodi, Pia Kjærsgaard) to create a fictitious story about an alleged attack on the Danish Prime Minister by a passionate anarchist.

Kaplers who plays the young protagonist said he lent his features to the part "out of necessity", because of the film's artistic argument.

'AFR' is both an attempt to explore the power of manipulation in modern mass media, and a pure melodrama, a genre that the filmmaker wants to continue to explore with his producer Meta Louise Foldager from Zentropa.

Born in 1971 in Denmark, Morten Hartz Kaplers was a curator for international contemporary art exhibitions, and a trapeze artist in the 1990s.

He then studied at the famous FAMU School in Prague. He directed several short films such as 'Sisyfos' World' which won the first prize at the national short film competition Close Up in 1997, 'Love and Power' in 2001 and 'Orchid' in 2003. 'AFR' is his feature length directorial debut.

Born in 1970, Jakobsen studied psychology at Copenhagen University in 1990, and turned to graphic design in the mid-1990s.

They worked together on 'AFR' between 2003 and 2007. This year, People Press has published his first novel 'Mand i Parcelhus' ('The Man in the Detached House').

She worked as a producer for Nimbus Film from June 2002 to December 2005 where she supervised the making of Nikolaj Arcel's 'King´s Game', 'Island of Lost Souls' and Ole-Christian Madsen's Angels in 'Fast Motion'.

In January 2006, she joined Zentropa, taking over from Vibeke Windeløv to produce Lars von Trier's films. Since then, she has produced his international hit 'The Boss of it All', and is working with him on his much anticipated first horror film 'Anti Christ'.

Foldager has known Nikolaj Arcel since 'King´s Game', and is producing his upcoming film 'Caroline Mathilde'. Other filmmakers she has collaborated with include Morten Hartz Kaplers ('AFR'), Omar Shargawi with 'Ma Salama Jamil', set to open in Denmark in the fall, and Pernille Fischer Christensen whose second feature after 'A Soap', 'Everybody´s Dancing' will premiere in the spring 2008.

Meta Louise Foldager received the Natsværmer Award in 2004 given to a promising talent in the Danish film industry.