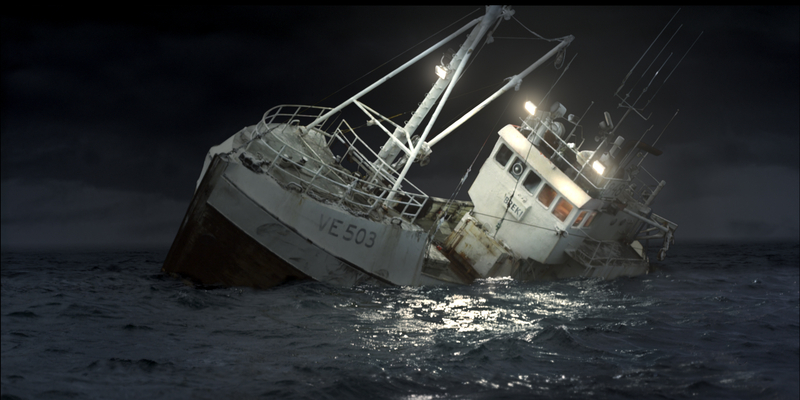 On a cold night in March 1984, a few miles off the south coast of Iceland, a fishing boat sank along with all of its men. Miraculously, one of its crew members survived. After six hours of battling the ocean for his life, the exhausted young titan, washes ashore, only to find himself in a deadly lava field.

Based on a true story of both deep tragedy and great individual heroism, The Deep vigorously explores both the human spirit and body. The cinematography remains captivating throughout, imbuing The Deep with harrowing but beautiful images of land, sea and the deep below. And in the role of the main protagonist Ólafur Darri Ólafsson gives a strikingly visceral and emotive performance, all the while supported by a strong cast, pulling the audience into his character’s traumatic experience. Director Baltasar Kormákur’s work transmits an intense struggle between man and nature. His dynamic style is reinforced by a bird’s eye view leitmotif showing the frailty and smallness of the human being as it is wrecked by the merciless forces of nature, adding a mythic dimension to this story of an extraordinary survival.

The Deep is based on a real incident that happened in Iceland in 1984 when a small fishing boat sank outside the Westman Islands in the middle of winter and all but one crew member lost their lives. The story remained in Baltasar Kormákur’s and the Icelandic nation’s collective memory. Then in 2008, at a time when the financial crisis was putting Iceland to its knees, Kormákur saw the stage play ‘The Deep’ by playwright Jón Atli Jónasson. He felt an urge to use the story of the lone survivor as a metaphor to the Icelandic nation’s spirit of endurance.

Ólafur Darri Ólafsson was enrolled to play the title role and The Deep was shot under tough conditions out in the Atlantic Ocean to make it as authentic as possible. The film was short-listed for the Oscars 2013 in the Best Foreign-language Film category and won a record 11 Edda awards including Best Film, Best Director and Best Actor. Nearly 30 territories acquired rights to the film such as Germany, France, Benelux, the US and Brazil.

The Deep is Baltasar Kormákur’s fifth nomination as producer at the Nordic Council Film Prize and his fourth selection as writer/director. Born in Iceland in 1966, the versatile Kormákur has become a major international talent by gradually building his name as an auteur with commercial flair, alternating works in his native country and in Hollywood. He graduated as an actor from Iceland’s National Academy of Fine Arts in 1990 and was immediately signed on by the National Theatre of Iceland where he worked until 1997.  In 1998, he founded his production company Blueeyes Productions to concentrate on writing, directing and producing feature films. His first film in 2000 was 101 Reykjavik starring Victoria Abril which won the Discovery Award in Toronto and put his name on the international map. In 2001 Variety selected him among ‘10 Directors to Watch’, alongside Christopher Nolan and Alejandro Inárritu.

In 2002 he directed The Sea and three years later he went to Hollywood to make A Little Trip to Heavenstarring Forest Whitaker. Back on home turf in 2007, he gave Iceland its biggest domestic hit ever, Jar Citybased on Arnaldur Indriðason’s crime novel, and was nominated for the Nordic Council Film Prize, just like his following comedy drama White Night Wedding in 2008. The same year Kormákur starred in and produced Reykjavik-Rotterdam that he remade in 2012 for the US and international market under the title Contraband. The Universal film starred Mark Wahlberg. The collaboration with the US star continued with 2 Guns (US opening in August 2013) and Wahlberg executive produced the HBO pilot The Missionary that Kormákur directed in the spring 2013. Upcoming mega-projects include Working Title’s Everest starring Christian Bale. At home, Kormákur intends to go back to Indriðason’s Reykjavik thriller series with Silence of the Grave, a sequel to Jar City.

Kormákur has recently opened up the television production arm Blueeyes Vision, where he is developing an English language sci-fi series based on the popular EVE Online game and the crime series Trapped.

Born in Reykjavik in 1972, Jón Atli Jónasson dropped out of school and worked as a fisherman, a pizza chef, a heavy metal DJ and a construction worker. In 2001 his collection of short stories about people searching for things in the snow, A Broken Beat was published. In 2002 he won a playwriting contest in Iceland and since then he has produced scripts for stage, radio, TV and film, many of which have found critical acclaim both at home and internationally. His first film experience was as supporting actor on Baltasar Kormákur’s 101 Reykjavik. He appeared in another handful of films, but his main film contribution from 2002 onwards was as scriptwriter. Among his feature film writing credits are Eleven Men Out (2005) by Robert Douglas, the 2006 Nordic Council Film Prize nominee Thicker than Water by Árni Óli Ásgeirsson, the thriller Frost by Reynir Lyngdal (2012) and recent drama Ferox by Thór Ómar Jónsson.

Besides The Deep, other films that were based on Atli Jónasson’s stage plays include Undercurrent, 2011 Nordic Council Film Prize nominee.

A former TV host for children's programmes, Johansen was appointed Director of Children's Programming for Iceland’s private broadcaster Channel 2 in 1991 until 1996. Between 1996 and 1997, she worked on a freelance basis on various projects in Poland and in the UK where she ended up as Head of Production for Saga Film. She served as Iceland's representative at Eurimages, and was involved in the development and promotion of various projects including Magnus Scheving's Lazytown.

She met Baltasar Kormákur in 2001 and worked as line producer on his feature film The Sea. One year later she joined Blueeyes Productions. Her production or co-production credits for Blueeyes include Sólveig Anspach's Stormy Weather, Silja Hauksdottir's Dis, Grimur Hakonarson’s Summerland, Kormákur's A Little Trip to Heaven, Jar City, White Night Wedding, Reykjavik-Rotterdam and The Deep.