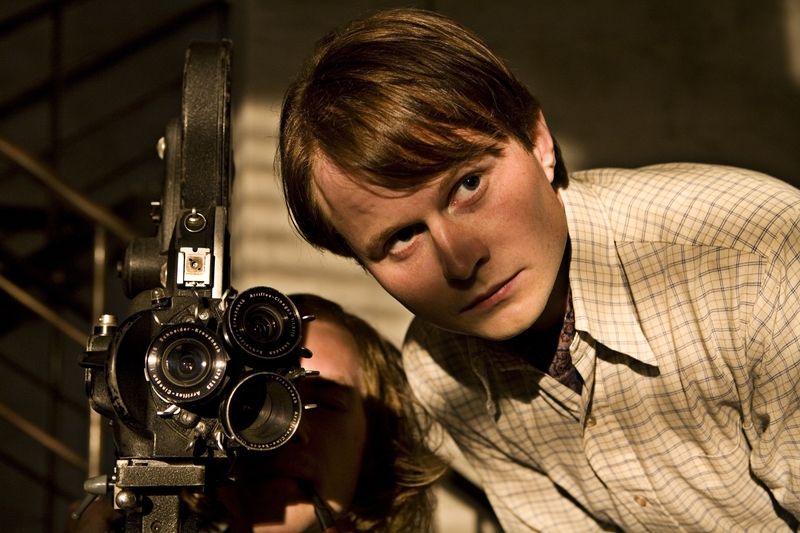 Erik Nietzsche is an intelligent but in many ways inexperienced shy young man who is convinced that he wants to be a film director. In the late 1970s Erik is accepted by the Danish National Film School where he enters a world of angry unhelpful tutors, weird fellow students and unwritten rules. It is both an exhilarating and angst-provoking period and Erik feels increasingly like a foreigner in the film industry. He encounters trade union disputes, falls in love and experiences self-assured, empowered women who refuse to make a commitment. It is a drama full of comedy — a sharp portrait of a conceited but entertaining world of film which we suspect our dogged young director will eventually concur with his vision.

The story of a wannabe filmmaker’s tribulations at the prestigious Danish Film School in the early 1980s was written by Lars von Trier as a semi-autobiographical exercise, using the self-mocking pseudonym of Erik Nietzsche Jacob Thuesen who edited several Trier’s movies, is directing to let the story stand on its own feet and steer it away from Trier’s persona. But the shadow of the enfant terrible of Danish cinema remains omnipresent, through the voice of the narrator, and clips of his earlier films.

The Early Years is a satirical comedy following the young and naïve Erik Nietzsche whose artistic ambition is to make a film about leaves. After being denied entry to several film schools, he –accidentally –is accepted by Denmark’s National Film School full of self-absorbed tyrannical teachers and weird fellow students who see themselves as geniuses. Through the film, Nietzsche (played by comedian Jonatan Spang), progressively loses his innocence and changes into a ruthless and cynical person, just like the rest of his filmmaking peers. “The film’s protagonist grows from a naïve talent into a cynical, calculating artist - a necessary evil for pushing your projects through,” says Thuesen. “This issue is quite relevant to me as well. I see myself as capable of befriending anybody if it helps my film!”

The film had its world premiere at the Toronto International Film Festival in September 2007 and has since been presented at a dozen world festivals. It has opened in several foreign territories such as Norway (Fidalgo), Sweden (Sonet) and France (Les Films du Losange).

Born in 1962, Thuesen graduated in film editing from the National Film School of Denmark in 1991. As editor, he has worked since the early 90s with various Nordic filmmakers, including Lars von Trier ('The Kingdom'), Susanne Bier ('Credo)', Jørgen Leth ('Haiti, untitled'), and more recently Niels Gråbøl ('The Gift') and Annette Olesen ('Little Soldier').

His first trial as writer/filmmaker was in 1996 with the documentary 'Under New York' (1996). His feature debut was the critically acclaimed 'Accused' which was nominated for Golden Bear in Berlin 2005 and won the European Discovery of the Year at the European Film Awards. The same year, Thuesen directed the documentary film 'Freeway'. 'The Early Years-Erik Nietzsche part 1' is his second feature film. His next feature project is 'Blekingegade' which will start shooting in 2009 for Zentropa.

Born in 1956, Denmark, Lars von Trier graduated in filmmaking from Denmark’s National Film School in 1983. In a few years Trier became the most celebrated Danish filmmaker on the international film scene, through his provocative and innovative works, most of them segmented into three trilogies: the E-Trilogy ('Element of Crime', 'Epidemic', 'Europa'), the Goldlocks-Trilogy ('Breaking the Waves', 'The Idiots', and 'Dancer in the Dark'), and the US-Trilogy ('Dogville', 'Manderlay' and the yet to be filmed 'Washington'). Trier is an habitué of the Cannes International Film Festival, were he was bestowed seven awards, including the coveted Palme d’Or in 2000 for 'Dancer in the Dark'.

His work for television also garnered him several world accolades, in particular 'The Kingdom' series.

As a scriptwriter, he has contributed to several of his fellow Danish colleagues’ works, such as Thomas Vinterberg’s 'Dear Wendy' (2005).

He became an inspiration for world filmmakers with his groundbreaking film manifesto Dogme 95 and continues to promote other Nordic and European filmmakers through his production powerhouse Zentropa.

Born in Copenhagen in 1972, Sisse Graum Jørgensen is one of the star producers at Zentropa, and a long-time collaborator to Susanne Bier and Lone Scherfig. She graduated with a B.A. in Business & Economics from Copenhagen Business School in 1995 and immediately started working as production coordinator on several commercials for Moland Film Company. In 1999, she joined Zentropa as producer assistant to CEO Peter Aalbæk Jensen.

Through Zentropa’s close partnership with Glasgow-based Sigma Films, Jørgensen co-produced Andrea Arnold’s acclaimed English language debut 'Red Road' in 2006, part of the low budget Advance Party concept, and is now involved in the production of the second film of the trilogy, 'Rounding up Donkeys' directed by Morag McKinnon. Jørgensen was the European Film Promotion’s Danish ‘Producer of the Move’ in 2003.

Marie Gade joined Zentropa in 1996. Over the last five years, she has mainly been working within the area of international co-productions and film financing, contributing to the making of Thomas Vinterberg’s 'Dear Wendy', Andrea Arnold’s 'Red Road', Jacob Thuesen’s 'The Early Years-Erik Nietzsche-Part 1'. Her latest credits as co-producer include Anders Morgenthaler’s 'Ekko' and Juliette Garcias’ 'Sois sage'.