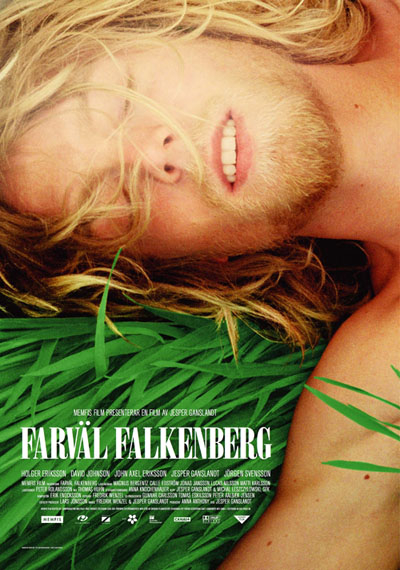 Mail Facebook Linkedin Twitter
'Falkenberg Farewell' which was Sweden´s entry for an Academy Award in 2006, is a very personal film about friendship, memories and a final farewell to Falkenberg, a charming little coastal town in South West Sweden.

The film depicts the last summer in Falkenberg for five childhood friends. David yearns to be a child again and Holger never wants to move away. The two friends escape to the forest and the ocean, away from the future.

Jesper constantly returns home without anybody really noticing that he´s been gone. Jörgen wants to break and enter into houses to finance his catering company, "Breakfast in bed". As for John, always in a bad mood, he believes that bacon makes him happy.

The future looms at the horizon but not all of them will be there to see it.

"I wanted to make a highly personal, almost private film that would mix memories and fiction, a story directly drawn from nostalgia, from a desire to become a child again", says the young filmmaker Jesper Ganslandt.

Directing his personal friends and protagonists in the film was crucial for Ganslandt to create a real sense of authenticity and pass on an emotional strength. But it wasn't easy.

"It is hard to direct your childhood friends and tell them to be themselves. They tend to think they know better themselves!"

The film was hailed by critics for its emotional, poetic cord and beautiful photography by Ganslandt´s childhood friend from Falkenberg, Fredrik Wenzel who also co-wrote the script.

'Falkenberg Farewell' was launched internationally at Venice Days in 2006 and then screened at Toronto´s Discovery section.

The film had four nominations at the 2006 Swedish Guldbagge awards (local Oscars) and is now short-listed for the European Film Awards 2007.

Born in 1978, Jesper Ganslandt has directed music videos and short films. He has worked as an editor and a director for television. Ganslandt is a self-taught filmmaker and says he finds inspiration from filmmakers such as Terence Malik, Lars von Trier, Ingmar Bergman, Gus van Sant and Pedro Almodovar.

Born in 1971, Anna Anthony joined Memfis Film, one of Sweden´s biggest production outfits, over 10 years ago, starting as production assistant and moving on to production manager, associate producer and finally producer.

Anna Anthony was Sweden´s Producer on the Move in 2001.