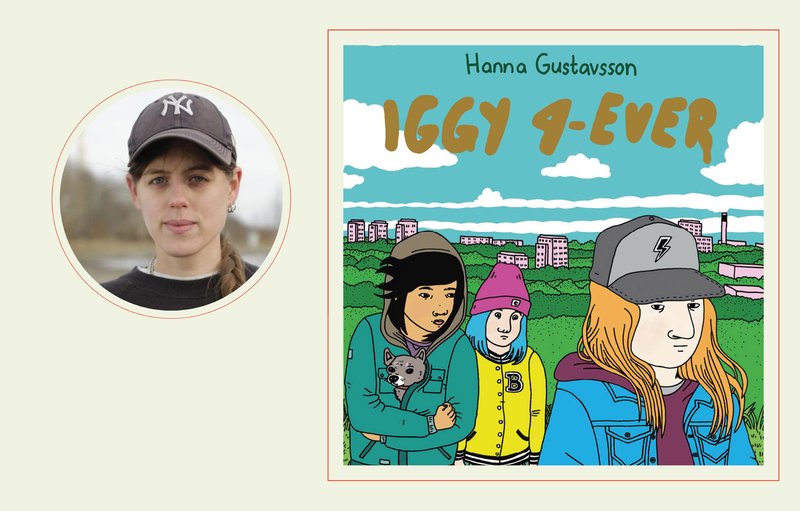 Hanna Gustavsson’s Iggy 4-ever portrays the life of a teenage girl in a Stockholm suburb. Iggy lives with her single mother and struggles with a day-to-day life plagued by bullies at school and a constant lack of money.

Together with her friend Julle, Iggy roams the suburban malls and backyards. Although they haven’t the money for new clothes, trying them on is a fun way to pass the time. Life is tougher, though, when her mobile breaks, or when her friends go out to eat pizza and all Iggy can do is sit and watch. Hungrily. She does not waste needlessly, for she knows how hard her mum works to make ends meet. The loyalty between mother and daughter is carefully depicted.

Gustavsson masterfully captures adolescent life, social inequality, and the ugly side of consumerism in modern day Stockholm. But that is not all. She paints detailed and forceful pictures that question and play with both the reader’s and the androgynous Iggy’s ingrained ideas about gender. Add perfectly tuned dialogue and well-paced storytelling, and the result is a comic book that lingers in the reader’s mind for a long while after reading.

Gustavsson is an illustrator and cartoonist. She studied graphic design and illustration, and holds a master’s degree in storytelling, at the Konstfack – or the University College of Arts, Crafts and Design – in Stockholm. She has also studied illustration at the California College of the Arts. She made her literary debut with the comic Nattbarn, which was awarded the 2014 Urhunden prize for the best original Swedish comic in 2013. Iggy 4-ever, which was nominated for the prestigious August Prize in 2015, is its standalone sequel.

Gustavsson has been hired as an illustrator by a number of renowned Swedish magazines, including Bang, Galago, and Brand. She also works for a number of publishers and belongs to the artists’ collective “En klump av överflöd”, which has had exhibitions at e.g. the Fotohögskolan photography school in Gothenburg, the Konstfack – or the University College of Arts, Crafts and Design in Stockholm – and the Galleri Lars Palm in Sandviken.