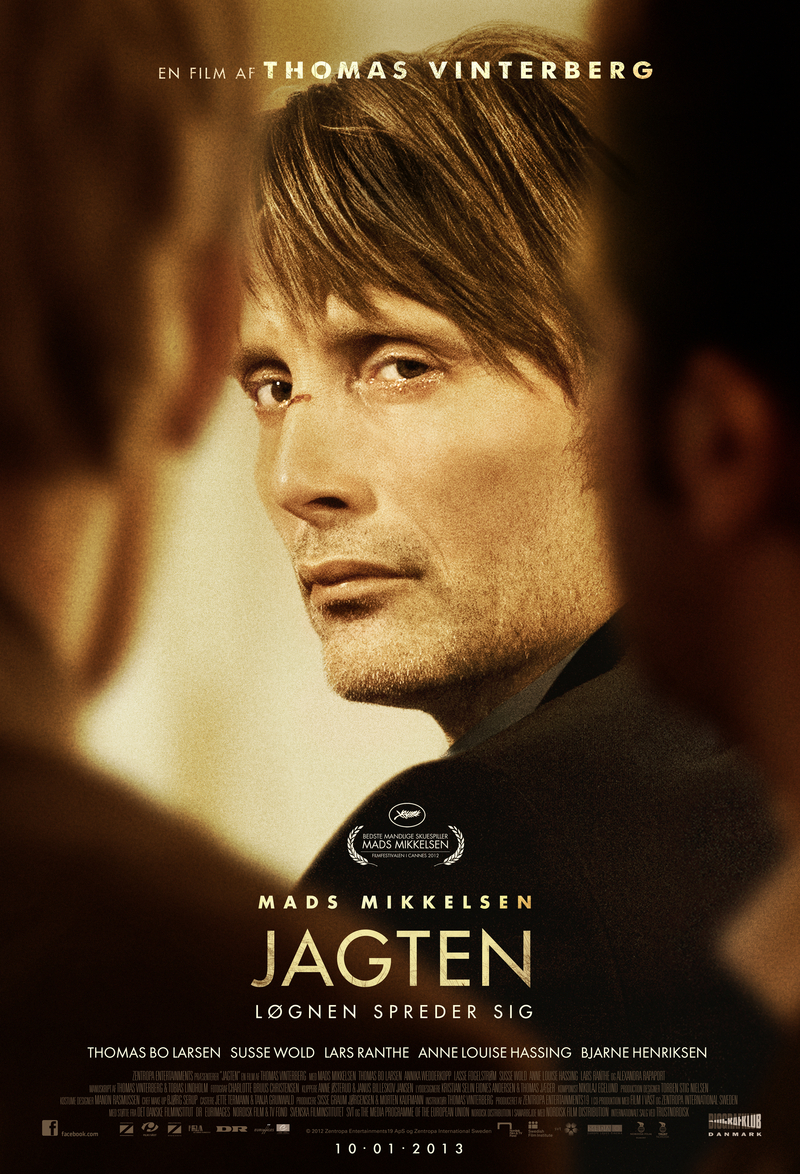 Following a tough divorce, 40-year-old Lucas has a new girlfriend, a new job and is in the process of re-establishing his relationship with his teenage son, Marcus. But things go awry. Just a passing remark - a random lie. And as the snow falls and the Christmas lights are lit, the lie spreads like a virus. The shock and mistrust get out of hand, and the small community suddenly finds itself in a collective state of hysteria, while Lucas fights a lonely fight for his life his and dignity.

"In 'The Hunt' Thomas Vinterberg is where he is best - and where few directors have the ability to be - in a story which manages to be a colourful melodrama and at the same time addresses difficult subjects that everyone can philosophise about: modern witch hunts, guilt and innocence, trust and forgiveness and loss of innocence in an overprotected world. You feel well entertained by the powerful manuscript and by Mads Mikkelsen's nuanced performance as the 'hunted', and you never stop discussing the film with yourself."

Back in 1999, one year after Thomas Vinterberg’s international breakthrough with his debut feature The Celebration, the director was approached by a child psychologist who handed him a file and urged him to read it as it shed a different light on the difficult subject of abuse though documents raving about children and their fantasies. But Vinterberg didn’t read the documents and shelved them. A decade later, he came across the psychologist’s file, read it and was shocked by its content. He immediately saw in it a great material for a movie. To develop the story of a man wrongly accused of child abuse and hunted down by a community, Vinterberg turned again to the talented Tobias Lindholm who had co-written with him the multiple award-winning Submarino (Nordic Council Film Prize 2010).

Mads Mikkelsen was hired for the title role for which he subsequently won Best Actor at the 2012 Cannes Film Festival, the first of several international accolades. The Hunt’s other major awards include Best Script at the European Film Awards 2012 and Best International Independent Film at the British Independent Film awards 2012. The Zentropa production was also highly successful at the local box office (number one Danish film of 2013) and has premiered in more than 30 territories such as France, the UK, Germany, Italy and the US.

Born in 1969 in Copenhagen, Thomas Vinterberg made his first short film at the age of 16. Three years later he was admitted to the National Film School of Denmark and his graduation film Last Round was nominated for a Student Academy Award. He made his directing debut The Biggest Heroes in 1996 that gave him three Robert awards. Two years later, he reached international fame with The Celebration -first film part of the Dogme movement-that won numerous world prizes including a Jury Prize in Cannes. The director then turned to English-language filmmaking with It’s All About Love (2003) and Dear Wendy (2005). He returned home with the comedy When a Man Comes Home (2007) followed by Submarino (2010). The drama entered the main competition in Berlin and received several major awards including the 2010 Nordic Council Film Prize.

In 2008, Vinterberg received an Achievement in World Cinema Award at the European Film Awards for his role as a founding member of the 1995 Dogme movement. At the 2013 Cannes Film Festival, he was bestowed a Prix MEDIA for Best new film project with box office potential eligible for MEDIA support. The Communebased on Vinterberg’s own successful stage play will be co-written again by Lindholm.

The 44 year-old director is also attached to the English-language film Far From the Madding Crowd based on Thomas Hardy’s classic novel, with Carey Mulligan and Matthias Schoenaerts.

Born in 1977, Tobias Lindholm is considered today as one of Denmark’s most gifted storytellers. The young talent was still studying scriptwriting at the National Film School of Denmark in 2007 when Thomas Vinterberg asked him to share the writing duties on Submarino. The film went on to win major awards, such as the Nordic Council Film Prize in 2010. The same year Lindholm wrote and co-directed with Michael Noer the prison drama R which premiered in Rotterdam and seduced critics and festival juries worldwide for its use of realism and authenticity. Lindholm’s second writing collaboration with Vinterberg on The Hunt collected more than 14 international awards including Best Actor in Cannes 2012 and Best Script at the 2012 European Film Awards.

His first feature as solo filmmaker, A Hijacking (2012) continued to assert his talent on the world map. Since its premiere in Venice 2012, the drama has travelled to 36 world festivals and won a dozen awards including five Roberts in Denmark for iBest Film and Best Script.  Lindholm’s recent writing credit is associated to Søren Kragh’Jacobsen’s The Hour of the Lynx, and he is now co-writing Vinterberg’s upcoming film The Commune.

For television, Lindholm has written several episodes of DR’s drama series The Summers and Borgen, and he was recently named one of Variety’s 10 Directors to Watch.

Born in Copenhagen in 1972, Sisse Graum Jørgensen is one of Zentropa’s star producers. She graduated with a B.A. in Business & Economics from Copenhagen Business School in 1995. In 1999 she joined Zentropa to work as assistant to co-founder Peter Aalbæk Jensen and since then, she has produced for them over 21 features and the TV drama-series Blekingegade.

Sisse Graum’s first feature production in 2001 was Chop Chop by Niels Arden Oplev with whom she worked again in 2006 on We Shall Overcome. She is particularly well-known for her long time collaboration with Susanne Bier that started in 2002 with Open Hearts (Nordic Council Film Prize nominee) on which she was associate producer. She then produced Brothers (2004), the Oscar-nominated After the Wedding, Oscar-winning In a Better World and romantic comedy Love is All You Need.

In 2003 Graum Jørgensen was selected as ‘Producer on the Move’ in Cannes.

Kaufmann’s first collaboration with Thomas Vinterberg was on the award-winning short film The Boy Who Walked Backwards (1995). Since then the producer has worked on virtually all of Vinterberg’s films. Following The Biggest Heroes (1996) Kaufmann was line-producer on The Celebration and It’s All About Love. In 2007 he produced and co-wrote Vinterberg’s When a Man Comes Home. He then produced the award-winning Submarino (2010 Nordic Council Film Prize winner) and The Hunt.