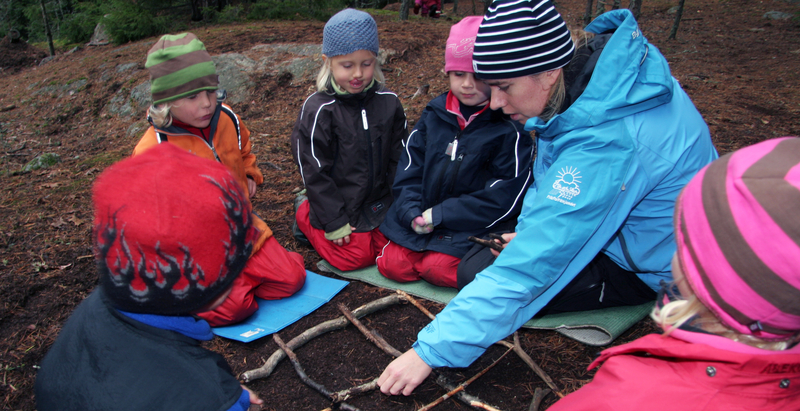 Photographer
Carl Crafoord
Mail Facebook Linkedin Twitter
The Nordic Council Nature and Environment Prize 2009 has been awarded to the Swedish forest-schools initiative "I Ur och Skur" (Rain or Shine). The Adjudicating Committee made its decision at a meeting in Iceland on Wednesday. It is the 15th time that the DKK 350,000 prize (approx. €47,000) has been awarded.

This year, the prize was earmarked for a Nordic company, organisation or person for exemplary work encouraging people to exercise in the great outdoors and for enhancing understanding of the importance of nature in general, and of physical and mental good health in particular.

The Adjudicating Committee explained the award.

"Rain or Shine by Friluftsfrämjandet (Outdoor Life) is a prime example of an organisation that has contributed to children's wellbeing and understanding of nature in an era where people spend more and more of their lives online. Rain or Shine concentrates almost exclusively on outdoor schooling, so the proximity of the individual child, not to mention the institutions, to nature is absolutely central to its activities.

Rain or Shine serves as a model to emulate, illustrating perfectly how time spent in the great outdoors enhances a child's wellbeing. Hopefully, it will serve as a source of inspiration for similar initiatives elsewhere, and similar work is indeed already being done in other parts of the Nordic Region."

The purpose of Rain or Shine is to promote the development of the child through linking outdoor activities to learning. The activities are designed to develop the child's senses by smelling, observing and listening to nature. All of the activities provide the children with a better understanding of nature and the environment. Studies also show that Rain-or-Shine children are considerably more healthy than kids in traditional schools.

Rain or Shine was founded by Friluftsfrämjandet in 1985.  Some 200 schools, mainly pre-schools, and a total of approximately 30,000 children and adults are now involved.

A total of 63 nominations were received for the prize this year, nine of which made it to the final round.

The Nature and Environment Prize is is one of four awarded by the Nordic Council – the others are for literature, film and music. Last year's environment prize went to the Icelandic company Marorka.

The prize, awarded for the first time in 1995, is designed to increase awareness of work on nature and the environment in the Region. The Environment Prize, as well as the three others, will be officially handed over to the winners at a ceremony during the annual Session of the Nordic Council in Stockholm at the end of October.