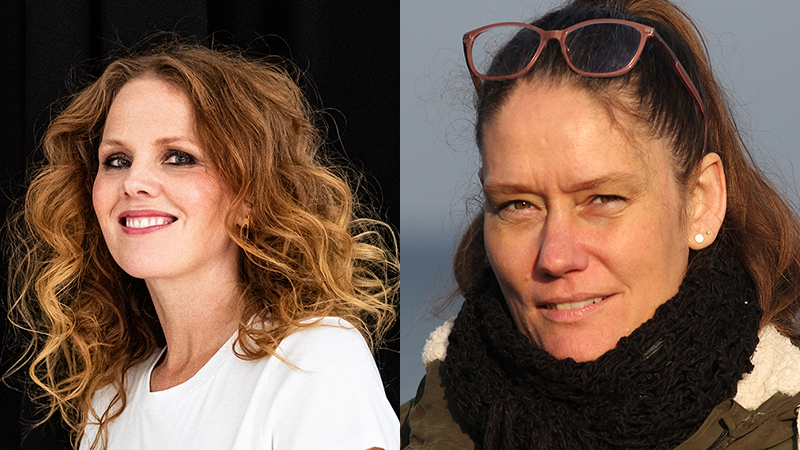 With these words, the book begins; a surprise is coming, but not straight away.

And that is certainly true. Using a neat and naive-naturalistic line, with just a little blue and brown colour, the illustrator is able to tell a condensed story of a boy living an expressionless and boring routine life with a cactus. Here we find the old saying about calm, cleanliness and regularity is strictly adhered to.

In the first half of the book the narrative is primarily borne along by the pictures, while the language creates an illustrative soundtrack with rhythms, rhymes and sentence fragments. You might call the style fine desert poetry, which goes well with the cactus.

But the book’s author and illustrator must have worked very closely together to create this picture book because, as promised – suddenly it’s there. Disorder arises in the regularity, and the boy livens up, gains facial expressions and discovers that someone has moved in with him: a bear.

The attentive reader may have sensed that this would come, because by his bed was hanging a picture of a bear that moved a little, and in this way left a trace in the narrative. But it is a modest picture.

When the bear enters the boy’s life, the calm, cleanliness and regularity are replaced by joy, lushness and imagination – both in the pictures, where the hue of the boy’s cheeks changes from a cold blue to a warm red, and in the language, which begins to sprout, in whole sentences, explanations, and outbursts of emotion. This development is not a rejection of the past, but an opportunity that suddenly presents itself. This is emphasised by the fact that the brown tones of the pictures are maintained in a notebook aesthetic, and that the boy, now as before, has a side parting in his hair. In this way, the book’s optimistic message is maintained: Suddenly, it can arrive. Just like that. Ud af det blå (“Out Of The Blue”, not translated into English).

The author Rebecca Bach-Lauritsen and the illustrator Anna Margrethe Kjærgaard have succeeded in creating a narrative that becomes a significant ode to the joy of life when it offers itself out of the blue. This is done by consciously utilising the simplest but simultaneously most condensed expressions of illustration and language. And they know their craft: Rebecca Bach-Lauritsen has previously received the Ministry of Education Writing Award, while Anna Margrethe Kjærgaard has received the Ministry of Culture Illustrator Award.

The two match and enrich each other in this picture book, which transgresses the usual boundaries of the genre, both in the narrative interaction and in the book’s volume: 40 double pages.

It keeps what it promises, and notes this itself in the final words: