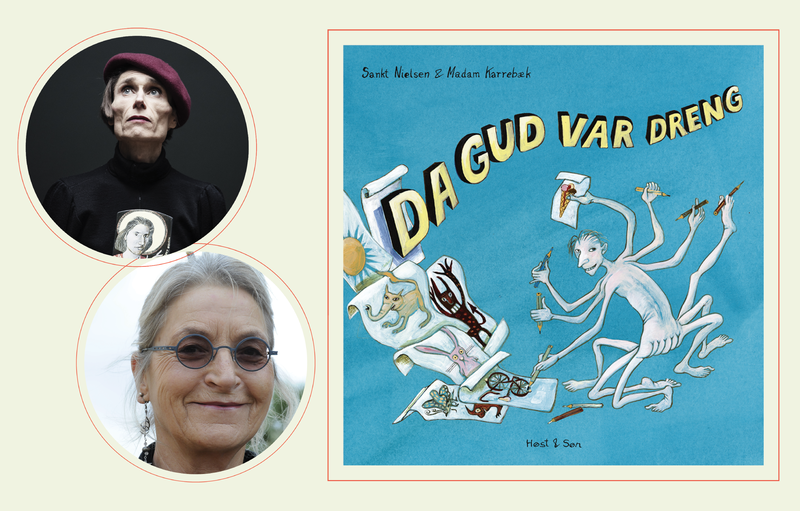 It all begins with a cell division, which spawns an insect, which develops into a strange creature with six legs and six arms, which turns out to be the boy God. This is followed by the sound of the answers to the questions that the most curious children pester adults with: “What was there before God made the world?” or, as the Danish pop group Subidua sang, “I wonder what we are, before we are?”

The answers float in the darkness first before changing to “Hey! What was that?” when it becomes light. God sees all that is beautiful and all that is horrible, and sneaks out of the blue with the words “Thank you, fate.”

The author, Sankt Nielsen, was once known as the multi-skilled artist Claus Beck-Nielsen, but he declared himself dead in 2001, after which he emerged as Das Beckwerk. He has now canonised himself as the patron saint of mad visions and of the children of the twenty-first century.

The illustrator, Madam Karrebæk, is described as being identical to Dorte Karrebæk, who for a generation has been one of Denmark’s greatest illustrators, noted for her instantly recognisable strokes and constant reinvention. Sankt Nielsen must take delight in the fact that she who wields the pencil bears an uncanny resemblance to the author.

The book addresses the great existential questions about the creation of the world, and of the individual. It begins as cell division over the first pages and grows in diversity. But unlike God, who so quietly sneaks out of the blue when he sees that what’s done is done, as readers we must sneak back into the book to confirm that it was something we overlooked.

Congratulations to the children and adults who can embark on this book when they feel that everything related to life’s big questions in life is like a sail in the wind.