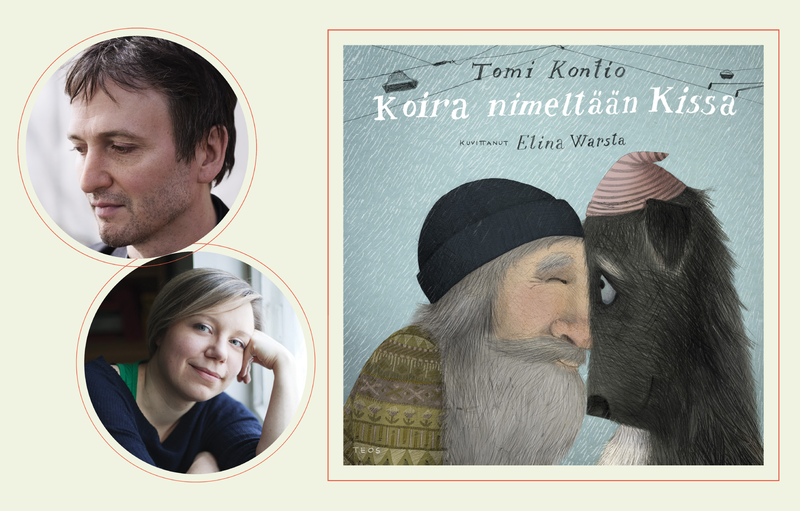 Tomi Kontio's and Elina Warstas’s picture book Koira nimeltään Kissa (in English, “The dog called Cat”) is proof of just how quickly children’s literature can react to social phenomena. Aimed at a wide age range, the book anticipates a changing social situation in Finland, addressing the economic recession and the increasing polarisation between the disadvantaged and the affluent.

The book contains several characteristics typical of children’s books that are sparing with words. Warstas’ illustrations play a key role in conveying the nuances of the story, as well as much of what would otherwise remain hidden between the lines.

This edgy story which shows great respect for the child’s understanding, together with its nuanced, almost eclectic illustrations, is so exceptionally ambitious as to make Koira nimeltään Kissa a brilliant example of the deep relationship between image and word, evidence in this case of the author’s and illustrator’s respect for each other’s expression. As a whole it makes a harmonious, insistent narrative, with illustrations that are forever in dynamic motion. Warsta embellishes the frames of the pictures with simple lines or figurative ornamentation.

The protagonist is a bastard whose mother has called him “Cat” since birth, because she wanted her puppy to develop into an independent thinker. The puppy’s life with his mother proves to be short-lived. Just as in a classic children’s book, the hero is cast out into the world upon which he must come to grips with life.

The dog called Cat comes across a homeless vagabond who has spent his life on the road. In the surprising but heart-warming friendship between these two soulmates, adversity turns into a shared resource. Kontio’s language is lyrical without being too fancy and rolls fluidly off the tongue of an adult reading to a child.

This is a multi-faceted picture book which takes an active approach to multiculturalism, identity, friendship, and social inequality. Indeed, it can be read as a socio-political position in which the neighbourhoods of Helsinki according to their privilege or lack thereof.

Warsta (born 1979) is an illustrator and graphic designer. Among her many book covers, several have won prizes in the Vuoden kaunein kirja (most beautiful book of the year) competition.

Kontio (born 1966) is an established poet and author. He has received numerous awards for his novels and poems. His first real venture into youth literature, Keväällä isa sai siivet (in English, “Daddy grew wings in spring”), immediately won the Finlandia Junior Prize in 2000, and was awarded the LukuVarkaus Prize by a children’s jury the following year.

Kontio’s poetry has been translated into many languages, including English, Spanish, Polish, Swedish, Czech, Hungarian, and Estonian.