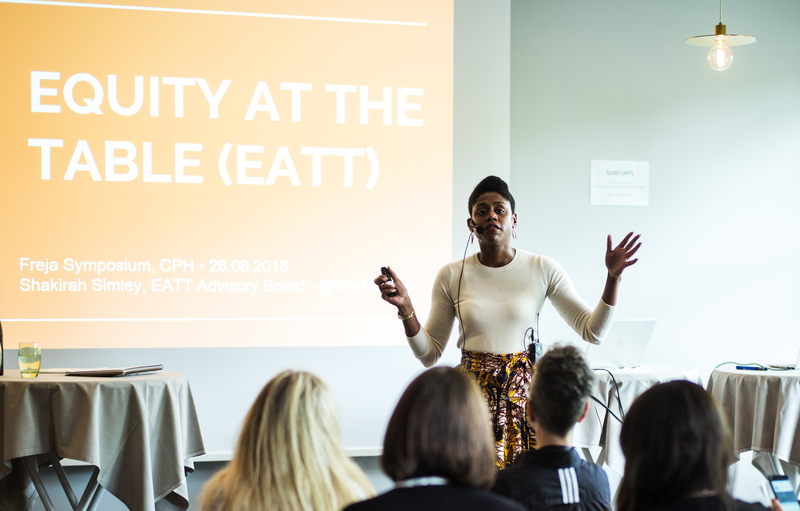 Talk by Shakirah Simley during the Freja Symposium in August 2018

Mail Facebook Linkedin Twitter
Looking from the outside in, it appears that the Nordics have it all figured out. High rankings on the United Nations Human Development Index. Top of the class in social trust. Champions of the Sustainable Development Goals. And world leaders in gender equality. However, this does not mean that we can all sit back and relax.

The New Nordic Food Manifesto was important in valorising high-quality local and seasonal ingredients. This focus has helped to normalise environmental consciousness in both in the food sector and amongst citizens.

At the same time, a select group of people have gained acknowledgement and fame for their involvement in the New Food Nordic movement: “New Nordic men are portrayed in the media as passionate and innovative souls with little interest in money or in high-paced modern lifestyles and consumer culture. They not only propose new culinary agendas, but also alternative narratives of what it means to be a man in a globalized, late-capitalist world. The New Nordic men have become global icons through their engagement with their local environment,” writes Jonatan Leer, Head of Research in Food and Tourism Studies at the University College Absalon, in his recent academic paper, New Nordic Men: Cooking, Masculinity and Nordicness in René Redzepi’s Noma and Claus Meyer’s Almanak.

Women have always been a part of the food service sector, serving meals in public canteens to fine-dining restaurants. However, the strong voices of a handful of prominent men have made it difficult for women in the hospitality industry to get their time in the spotlight. This issue extends well beyond the kitchen: the most recent Global Media Monitoring Project report found that women make up only 24% of persons heard, read about or seen in a newspaper, television and radio news.

Cultural bias towards and the overrepresentation of men in the New Nordic Food movement has sparked a number of initiatives that are trying to uncover the deeply-rooted issues that prevent diversity from becoming the norm.

The first inaugural Freja Symposium was held in August 2018. The Symposium, supported by the Nordic Council of Ministers, is on a mission to improve gender equality in the hospitality industry of the Nordic countries.

“We realized that there is a real equality challenge in the industry and society. We have learned that there is great support for promoting gender equality in the restaurant industry in the Nordics. There are significant similarities between the Nordic countries, but also major differences – especially when it comes to addressing such a challenge as equality. Of course, these differences must be respected and perhaps both Nordic and national solutions can be found to reach the goal. However, it makes sense to stand strongly together and focus on creating new Nordic standards,” says Maria Louise Nørgaard Olesen of the Food Organization of Denmark, the entity responsible for the organization of the Freja Symposium.

By uniting decision-makers from the world of gastronomy around the goal of creating solutions, the Freja symposium enables knowledge-sharing as well as the celebration of equality and commitments to action.

Freja has also been an important platform to raise the status of the hard-working women who contribute to the hospitality industry, but whom are often not acknowledged.

“Recognition is a keyword! We need to pay less attention to male chefs – their space must be reduced if female chefs' space is supposed to grow. There also a need for investment in leadership training in the restaurant industry – a competent modern leader is not sexist or racist. We need to question the "male geniuses" – the famous middle-aged male chefs who control their kitchen like in the 1970s: with sexism, racism, discipline and worthless working conditions,” remarks Sophia B Olsson, Head Chef of Restaurant Vrå in Gothenburg, Sweden.

Now it its second year, the Freja symposium will continue to gather opinions and perspectives from around the Nordic region about how to make restaurants better places for everyone to work.

For two years in a row, the international Parabere Forum has been held in the Nordic Region – first in Malmö in 2018 and Oslo in 2019.

Like Freja, Parabere brings thought-leaders in the field of gastronomy, food and nutrition together to create a powerful, global network that strengthens the influence of women in the food sector.

A common excuse for not featuring female professionals in news stories or at high-level conferences is because they cannot be found. Knowing this, Parabere Forum has been developing a comprehensive database that now features over 5,000 chefs, sommeliers, food producers, scientists, anthropologists, innovators and experts from all over the world.

“Currently, there’s a glaring discrepancy between female and male representation in the hospitality industry. At the same time, as women seem to have disappeared from the picture, at least publicly – and this may not be a coincidence – there is an enormous amount of suspicion about the food industry. We need women's voices to be heard and women's talents to be deployed so that we can boost confidence in food, and construct a vision for the future based on the values of sustainability and equal opportunities,” says Maria Canabal, President of the Parabere Forum.

Another contribution to drawing more attending to gender equality in the food and hospitality sector has been the Parabere Gourmet City Guide App, which includes food trucks, eateries, small bars, artisan bakeries and fast-casual spots led and owned by women in different cities around the world like Copenhagen. Accompanying the launch of the app, Parabere Forum revealed Cooking up a Better Food Future, a compilation of essays written by 100 Female culinary leaders on their hopes for the future. Another contribution to elevating the status of women is the Parabere Care Award, which acknowledges those demonstrating leadership in managing the boundaries of work and personal life.

Are we there yet?

Intuition tells us that diversity is an inherently good thing. And so does the research. Studies by McKinsey, a leading management consulting firm, have consistently found that companies that had more gender diversity as well as ethnic and cultural diversity were more likely to outperform their competitors.

With potential financial benefits on the line, what’s standing in the way of change?

Missing data on the issue has made it hard to put a finger on the exact issues that are constraining gender equality.

Fortunately, this has led to a study by The Danish Institute for Human Rights on sexual harassment in the hotel and restaurant industry carried out at the Copenhagen Hospitality College. The results of the study will be revealed at the next Freja Symposium in August 2019. However, this is just a small drop in an ocean of complexity that needs to be investigated from multiple perspectives.

“We cannot continue on with the same old groove. The most important thing is to recognize that new initiatives need to be put into motion if we really want to create change. The greatest progress lies in the fact that there is more and more discussion about gender equality – or lack of it – in our society. It is difficult to create a change if the challenge that we are trying to address is not recognized and well-defined,” adds Maria Louise Nørgaard Olesen.

Close your eyes for moment and transport yourself to the year 2034. What has changed in the Nordic food scene? How diverse, inclusive and equitable is it? While we cannot know exactly what to expect, we can influence this pivotal moment. Let’s write the future together.

We would like to thank Maria Louise Nørgaard Olesen (Food Organization of Denmark), Sophia B. Olssen (Restaurant Vrå) and Maria Canabal (Parabere Forum) for providing information that informed this thought-piece.

This story is a part of a series about the future of New Nordic Food. Follow Afton Halloran, sustainable food systems expert, as she listens to different voices from around the Nordic region.

Contact information
Elisabet Skylare
elisky@norden.org
+45 2171 7127
Longreads
Dive into longreads from some of the pioneers who set out to create the new Nordic kitchen, as well as the thoughts of a number of food activists on the future of food.
How can we help you?
More

The Nordic Region Accepting the Challenge