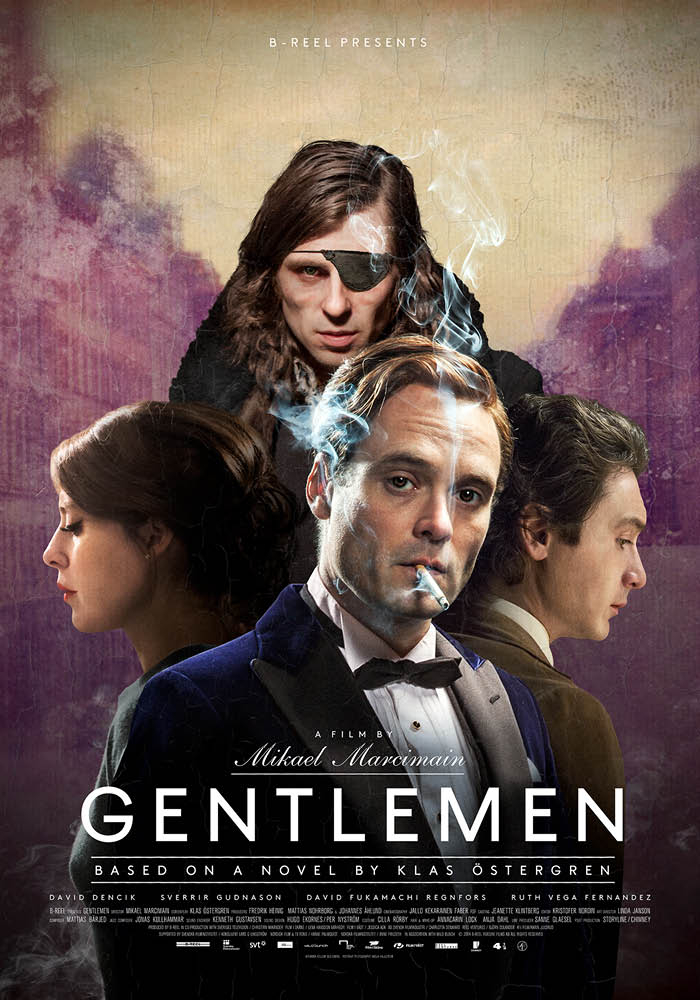 The young novelist Klas Östergren is at odds with the world, hidden away in his apartment in Stockholm to tell the story of the people who lived with him and whose fortune changed. Henry Morgan, a boxer, an ineffable jazz pianist and bon vivant with a secret: he is tormented by love for a mysterious mistress. And then there is Leo, Henry’s brother, a political agitator, a poet, a drunk. From the moment he arrives, he drags everyone into trouble because of a weapons trafficking deal with a gang of criminals.

Gentlemen takes us on a winding journey of a story in which time perspectives and identities are as fluid as the boundary between dreams and fantasy. The attention to detail in the film’s various expressions culminates in a uniquely personal, playful and self-reflective work.

Mikael Marcimain (1970) started as assistant director for SVT and rapidly made his name with the TV series The Laser Man (2005) and How Soon Is Now/Upp till kamp, winner of a Prix Italia in 2008. His feature debut Call Girl won a FIPRESCI Discovery Award at the 2012 Toronto International Film Festival. His second feature Gentlemen based on Klas Östergren best-selling novel, won three Guldbagge film awards.

Marcimain is also one of the most established commercial directors in Scandinavia. He has directed international campaigns for Ericsson, IKEA and Danske Bank among others.

Klas Östergren (1955) is the author of several novels including the landmark Gentlemen (1981) and its sequel, Gangsters (2005). A leading star of Swedish literature for nearly three decades, he has won the Piratenpriset and the Doblougska prize from the Swedish Academy. A founder of the rock band Fullersta Revolutionary Orchestra, Östergren has also worked as a translator, playwright, and scriptwriter for film and television. He co-wrote with Lisa Ohlin the script for her film Waiting for the Tenor (1998) and Mikael Håfström's film Evil (Ondskan), Academy-award nominated for Best Foreign Language Film.

Fredrik Heinig (1970) has 15 year worth of experience as a producer of commercials, films and TV programmes. The company B-Reel which he co-founded was named the world’s best production company in 2011 by AD Age magazine.  He has produced no less than five projects with Johan Kling, such as the series Stockholmare (2001) and the feature film Darling, winner of the Nordic Film Award 2007. The documentary film Palme by Kristina Lindström and Maud Nycander became Sweden’s top grossing local documentary in more than 30 years when it opened in 2012.

Gentlemen, directed by Mikael Marcimain, had its world premiere at the Toronto International Film Festival 2014. Heinig’s upcoming films include Pernilla August’s The Serious Game scheduled for a fall 2016 national release.

Mattias Nohrborg (1959) is one of the most established members of the Swedish film industry, having acquired and distributes arthouse films through his companies Triangelfilm and then TriArt for more than three decades.  He has worked for B-Reel since 2009, producing titles such as the documentaries Palme, Foodies, Fanny, Alexander & I, and Gentlemen. Upcoming projects include Kristian Petri’s documentary The Hotel and Jane Magnusson’s Bergman.

Johannes Åhlund is the founding partner and COO for Europe at B-Reel.

He studied political science at the University of Stockholm before starting a career in television, first as a reporter and editor, then as a producer. Between 1998 and 2005, he produced around 40 TV productions such as Johan Kling’s mini-series Spacer (2002). In 2009, the thriller Bad Faith by Kristian Petri had its official screening in competition at the Toronto International Film Festival. He then co-produced the Norwegian film King of Devil’s Island (2010), followed by Mikael Marcimain’s Gentlemen (2014).