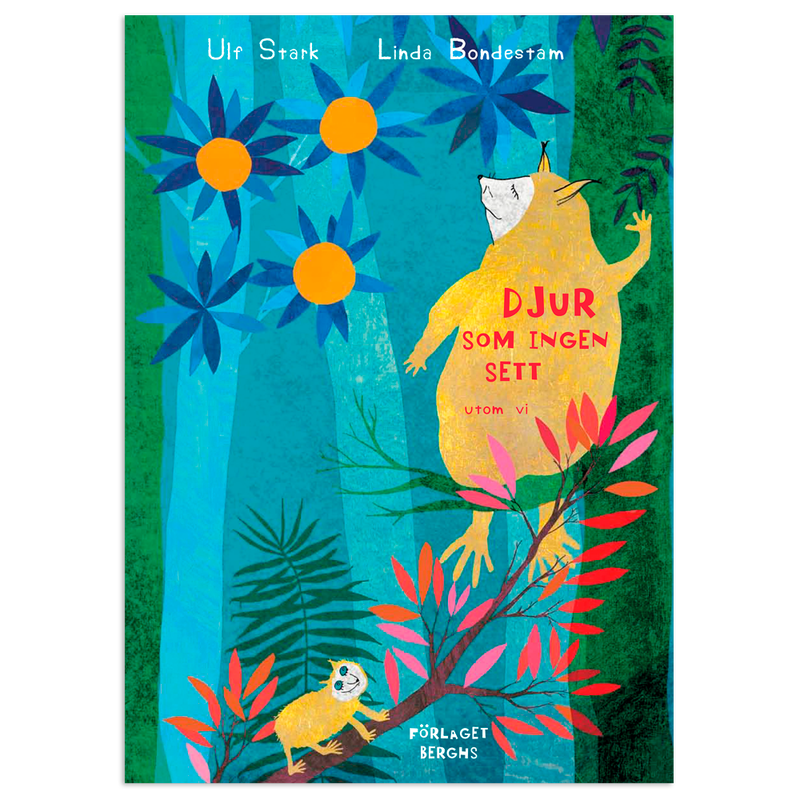 In pictures crackling with colour, with deep red skies and intense blue-green forests, seas and mountains, dwell the animals nobody has ever seen – except, that is, for Ulf Stark and Linda Bondestam. They include Daglingen (the Dayer), which lives for only one day, the seldom-seen Celansetten (the Rarely-seen), the Bombomen (the Boom-Boom), Väntansdjuren (the Waiting Beast) and Sssch (Shhh). These curious creatures remind us of our existing fauna – almost. Several are more reminiscent of the inhabitants of Moominvalley.

And yet they are very much like us. Many are lonely souls who find it difficult to come to terms with life. The lonely Eskalopen (The Escaloper) feels that “Everything in the world belongs together. Except me.” The Nomadinen (the Nomadess) “lives in the belief that the grass is always greener on the other side”. Few of them are particularly happy with their lot in life. They are more bipolar, feel conflicted or alien in their bodies, or yearn for something else

Stark tackles all of these issues beautifully and with great ingenuity in Djur som ingen sett utom vi (“Animals Nobody Has Seen Except Us”, not translated into English), bringing humour to the poems’ underlying melancholy. Some of the poems fully embrace sorrow. In particular, the beautiful Fågel Free (Free Bird), dedicated to the Finland-Swedish author Stella Parland, who died aged 40 in 2015:

You sang so beautifully: “Anarchy!”

And made everybody smile.

then you flew away, now we wonder:

But in the dream, you’re here

from five o’clock to seven.

Bondestam had worked with Parland on several book projects, and her personal sense of loss is palpable here. On the left-hand side of the double-page spread, tears rain down over sorrowful grey birds.  On the right-hand side, a little red bird flies through a wistful, grey-pink dreamscape worthy of a Japanese woodcarving. Two trees stretch their frail branches towards the bird as the line between sea and sky symbolically dissolves.

But these pages are an exception. The others are dominated by a life-affirming blaze of colour and wildly imaginative animals, all with an original and personal touch. Stark’s wacky rhymes and absurd wordplays, together with Bondestam’s vibrant drawings, make for an integrated artistic experience.