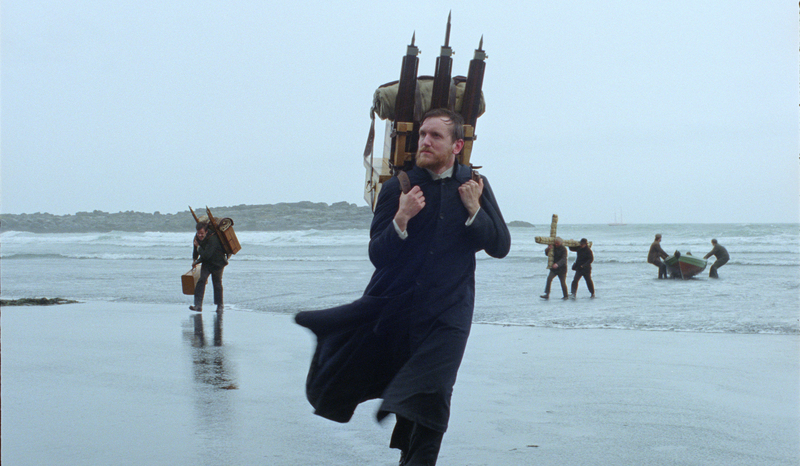 Set in the late 19th century, Godland tells a story of a young Danish priest who travels to a remote part of Iceland to build a church and photograph its people. But the deeper he goes into the unforgiving landscape, the more he strays from his purpose, the mission and morality.

At a time when many nations have to examine their past with a magnifying glass, director Hlynur Pálmason’s new film is both a grandiose and intimate human reflection on Denmark’s missionary past in Iceland.

A Danish priest travels through the rugged Icelandic landscape armed with good intentions, but soon succumbs to his own physical and mental weaknesses, and the Danish-educated Icelandic director depicts his journey with a unique mix of Carl Th. Dreyer’s calm, liberatingly twisted sense of humour, and a nuanced gaze at the dark side of religion and the difficult encounter between the two cultures.

The film is based on the first photographs found in Iceland, and unlike the priest, Pálmason does succeed in  his  difficult mission:  To make the past come alive for us with an unpredictable story and beautiful images, the encapsulation in 4:3 format makes the landscapes stand out in a new light.

Pálmason brings together the themes of masculinity and his incredible aesthetic sense from the previous films in his career’s largest and most thought-provoking work to date.

Hlynur Pálmason (born 1984) is an artist and filmmaker born in Iceland. He started out as a visual artist, and then graduated from the National Film School of Denmark.

Eva Jakobsen (born 1977) is a producer at the Copenhagen-based Snowglobe, co-founded in 2015 with Katrin Pors and Mikkel Jersin. Through Snowglobe, Jakobsen has produced and co-produced numerous projects by some of the most esteemed arthouse directors including Jonas Carpignano, Joachim Trier, Eskil Vogt, and Jonas Alexander Arnby. She has also nurtured first and second features by Danish filmmakers such as Jeanette Nordahl, Marianne Blicher, Ingeborg Topsøe and Martin Skovbjerg.

Recent acclaimed co-productions include Maryam Touzani’s The Blue Caftan and Joachim Trier’s The Worst Person in the World. Hlynur Pálmason’s Godland which had its world premiere at Cannes’ Un Certain Regard in 2022, is the director’s third collaboration with Jakobsen after A White, White Day and the short film Nest.

Prior to Snowglobe, Jakobsen worked at Nimbus Film and Zentropa. Her production credits also include the successful family franchise Antboy and its sequel Antboy-Revenge of the Red Fury. Pors holds a BA in Film and Media Studies from the University of Copenhagen. She was selected for the EFP’s ‘Producer on the Move’ at Cannes 2014.

Katrin Pors (born 1983) is a producer, known for bridging Latin America and Northern Europe. She is co-founder of the Copenhagen-based production company Snowglobe. Pors has more than a decade of experience working as a producer, executive and co-producer on numerous projects with some of the most esteemed directors including Amat Escalante, Annemarie Jacir, Jonas Capriagno, Carlos Reygadas and Ralitza Petrova. Her most recent acclaimed features include Birds of Passage by Ciro Guerra and Cristina Gallego, and the co-productions The Worst Person in the World by Joachim Trier and Monos by Alejandro Landes. Hlynur Pálmason’s Godland is her third collaboration with the Icelandic-born writer/director after A White, White Day (2019) and Nest (2022).

Pors is a graduate from the Escuela Internacional de Cine y Televisión, Cuba and the Media Business School, Spain. She also holds a degree in International Business and Politics from Copenhagen Business School.

Mikkel Jersin (born 1980) graduated from the National Film School of Denmark in 2011. He is co-founder of the Copenhagen-based production company Snowglobe.

Over the last 15 years, Jersin has worked on more than 40 shorts, feature length films, documentaries and television series. His production credits include the award-winning film Sparrows by Rúnar Rúnarsson, Godless by Ralitza Petrova, and Wildland by Jeanette Nordahl. His most recent award-winning productions include Miss Viborg by Marianne Blicher, and the co-productions The Worst Person in The World by Joachim Trier and The Blue Caftan by Maryam Touzani.

Hlynur Pálmason’s Godland is her third collaboration with the Icelandic-born writer/director after A White, White Day (2019) and Nest (2022). Jersin was selected for the European Film Promotion’s ‘Producer on The Move’ in 2016.

Anton Máni Svansson (born 1984) is a producer and CEO of the Reykjavik-based Join Motion Pictures, co-founded in 2007 with writer, director and producer Guðmundur Arnar Guðmundsson. The producer studied psychology, philosophy, and scriptwriting at the University of Iceland before getting into the production of short films and music videos in 2007. He has worked on 15 films in the last 15 years, mostly with Guðmundsson on films such as Heartstone and Beautiful Beings. Godland is the fifth collaboration between Svansson and Pálmason after Seven Boats (2014), Winter Brothers (2017), A White, White Day (2019) and Nest (2022). Godland is Svansson’s fourth nomination for the Nordic Council Film Prize after Heartstone (2017), Winter Brothers (2018) and A White, White Day (2019). Svansson was selected as EFP’s ‘Producer on the Move’ in 2017, and won a Lorens Award for Best Producer in Gothenburg in 2017 for the feature film Heartstone.