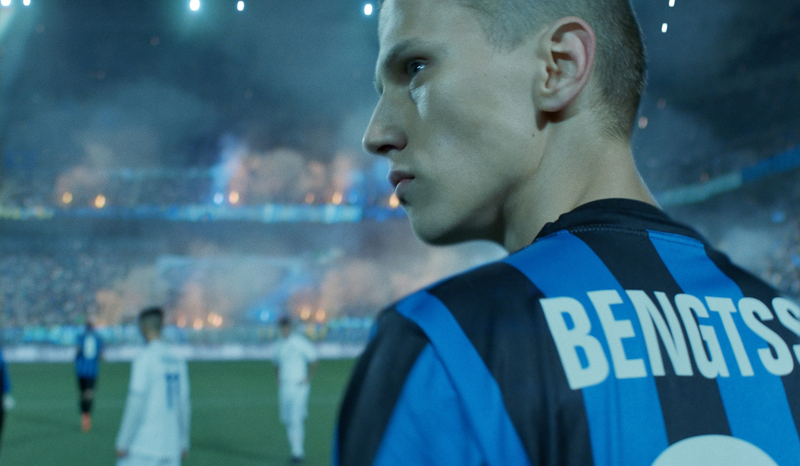 Martin is one of the most promising football talents Sweden has ever seen. At sixteen, his lifelong dream comes true when he is bought by one of Italy’s most prestigious clubs. But that dream comes at a very high price in terms of sacrifice, dedication, pressure and - most of all - loneliness. Martin begins to question whether this is actually the life he yearned for. With a unique perspective on the world of professional sports, Ronnie Sandahl tells the true story of 16-year-old football prodigy Martin Bengtsson. The film is a coming-of-age drama about a young man’s burning obsession in a world where everything, and everyone, has a price tag.

Ronnie Sandahl skilfully depicts the uglier side of sport, a world where young talents are reduced to bodies, competitive psyche and their most recent performance. Photography and sound work capture the details that make the story bigger, conveying both internal and external chaos, and offering an authenticity that few can achieve in terms of the nerve on the football field and the electric atmosphere in a stadium. Erik Enge carries the film on his shoulders and fills every frame he is involved in with his sensitive acting and minute shifts in body and face. This fine combination of personal direction an acting talent is a rare gem.

Ronnie Sandahl (1984) is an author, screenwriter and director, with a background in journalism.

Since his feature debut Underdog (2015), awarded at the Zurich and Chicago film festivals, Sandahl has been working on a movie trilogy on sports and psychology: in addition to Tigers, he also wrote the script for Borg vs McEnroe (2017), winner of the Audience Award at the Rome Film Festival, and the upcoming gymnastics drama Perfect directed by Olivia Wilde. Tigers won Best Film at the Busan Film Festival 2020, the Youth Jury Prize at Lübeck-Nordic Film Days, and the Dragon Award-Best Nordic film at the Göteborg Film Festival in 2021.

Piodor Gustafsson (1962) has more than thirty years of experience within film, television and advertising. Since September 2020, he has been Director of Scripted Content at TV4 Media. Gustafsson has previously worked as CEO for Black Spark Film & TV, Head of Programming and Commissioning Editor at SVT, and Commissioner of Feature Film at the Swedish Film Institute. He also co-founded the animation company Happy Life and acted as CEO and producer for almost 10 years.

Those include Björn Runge’s The Wife (2017) for which Glenn Close earned an Oscar nomination, Ali Abbasi’s Border, Un Certain Regard Prize winner at Cannes 2018, the television series Sthlm Requiem, Moscow Noir and Everything I Don’t Remember. He is co-producer of the Icelandic film Lamb starring Noomi Rapace, selected for Un Certain Regard at the Cannes Film Festival 2021.