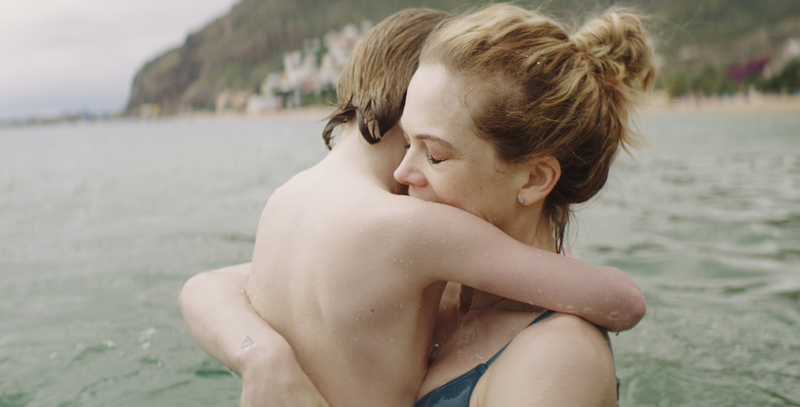 Following a difficult divorce, Stockholm-based Alice hasn’t seen her children in two months. They live in Northern Sweden with her ex-husband, who has barred her from seeing them. While waiting for the final custody verdict, she gets a phone call in the middle of the night from her distressed son, Vincent. She rushes to Northern Sweden to see him and his sister, Elina. When her hopes of reconciliation with her children are dashed upon arrival, she abducts them and embarks on an illicit trip to Tenerife to try to reconnect with them.

By way of a contemporaneous and emotional custody case, Amanda Kernell portrays the complexity of life and close relationships as if taking place in a mirror. The children looking at the adults. The adults looking at themselves. Through exquisite personal direction, the detailed story deepens and evolves into an uplifting drama without any definite answers. From the icy winter evenings in Northern Sweden to the sultry nights in Tenerife, Kernell – in collaboration with photographer Sophia Olsson – creates an image-based film that reverberates with viewers long after the final credits.

Amanda Kernell, born in Umeå in 1986, is a graduate of the National Film School of Denmark. Her films are often deeply rooted in Sami culture and the natural environment. She has directed several award-winning short films, including Northern Great Mountain, which had its world premiere at the 2015 Sundance Film Festival.

Her breakthrough feature debut, Sami Blood (2016), has won numerous awards, including the Fedeora Award for Best Debut Feature at Venice Days and Göteborg’s Dragon Award Best Nordic Film and Best Cinematography (Sophia Olsson). The film was nominated for the Nordic Council Film Prize in 2017. At the same time as she was making Sami Blood, Kernell was also directing the mid-length film I Will Always Love You Conny. Her second feature-length film, Charter, had its world premiere as part of a competition at the 2020 Sundance Film Festival.

Lars G. Lindström (born 1955) has been working at Nordisk Film Production Sverige AB since 2013. He has wide-ranging experience in film, television, and theatre.  In 1984 he started working for Stockholms Stadsteater, where he worked as a producer, artistic director, and business developer for 19 years. Parallel to his theatre career, he took on numerous jobs as first assistant director for Scandinavian films. After four years as film commissioner for the Swedish Film Institute (2009-2012), he started working as a full-time producer. For Nordisk Film, Lindström has produced Daniel Espinosa’s Babylon Disease, Åke Sandgren’s To Love Someone, and Pernille Fischer Christensen’s Becoming Astrid.

Eva Åkergren (born 1980) studied TV and video in Gamleby, Småland and began working in film in 2001. She has been working as an in-house producer at Nordisk Film Production Sverige AB since 2018. Åkergren freelanced for many years as a production manager for major Swedish films and television dramas, including Wallander (2009), Maria Wern (2011-12), and Gentlemen & Gangsters (2016). She was line producer for the award-winning films Sami Blood (2016), Beyond Dreams (2017), and Border (2018). Kernell’s second feature, Charter, which had its world premiere at the 2020 Sundance Film Festival, is her first film as a producer. Åkergren is currently co-producing Ali Abbasi’s upcoming film The Long Night.