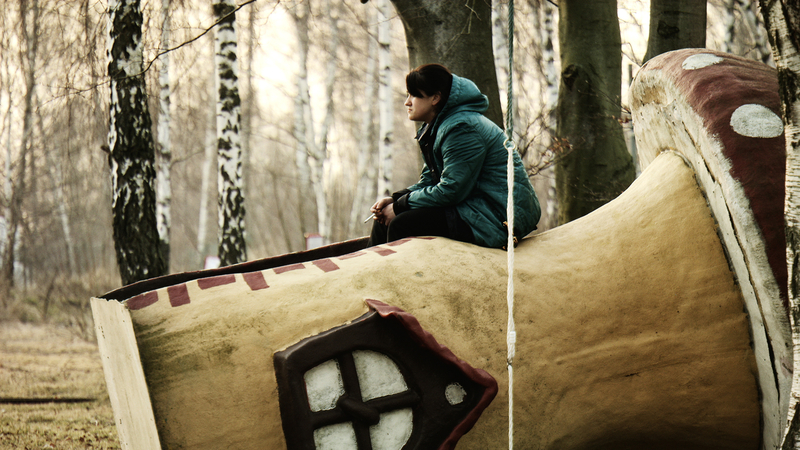 When the forceful young Muslim Swedish/Balkan "take-no-shit" factory worker Raša loses her job, she faces the system of unemployment. With no high school diploma, no job – but her boots deeply stained with the mud of the small town she grew up in, Raša finds herself on a collision course with society and its contradictory values and expectations.

In her feature film debut Eat Sleep Die Gabriela Pichler speaks directly from a market economy backyard. With the help of the acclaimed leading actress Nermina Lukac and the absolute pitch of all the other amateur actors, she has drawn a subtle but tough picture of everyday racism, exclusion and class differences. It sounds heavy and it is really heavy at times but in a rather unusual way, the director and scriptwriter Pichler has managed to inject a solid dose of warmth and humour giving this harsh story some tangible charisma. She tells the story with great self-assurance, adds no great external conflict or stimulating side story to hold our interest on top - everyday life is confrontational enough. Eat Sleep Die is a piece of unsophisticated life.

When Gabriela Pichler left her job as cookie factory worker in small town Sweden to become a filmmaker, she brought her unique life experience with her and her desire to show a ‘different’ Sweden on screen, a vision of a mixed society with different social classes and ethnic groups. She was determined to go against the mainstream genres of crime, light romance and comedy.

Using her documentary training, she set on a mission to give a voice and a face to the anonymous workers that she had rubbed shoulders with in rural Southern Sweden and spent hours of research and casting to identify the people who would be on screen what they are in reality. To find the main charismatic female character of Raša who fights against unemployment and bureaucracy while keeping a loving relationship with her father, Pichler had to wait nearly a year, until her casting director found Nermina Lukač in a youth centre.

The Montenegro-born amateur actress carried the film on her shoulders and received numerous awards for her performance such as Best Actress Award at the Seville and Amiens film festivals, and the Viasat Film Rising Star in Stockholm 2012. This year, Lukač was crowned Best Actress at Angers’ Premiers Plans Film Festival in France where Eat Sleep Die won the Grand Jury Prize, and at Sweden’s annual Guldbagge awards, the film won four prizes for Best Script, Director, Actress and Supporting Actor (Milan Dragišić). Eat Sleep Diewas hailed by critics worldwide and in Sweden where the film won a Greta award from the Swedish Film Critics Association.

Chosen this year among Variety’s 10 European Directors to Watch, Gabriela Pichler’s filmmaking style has been compared to the social realism of the Dardenne brothers, and to Lukas Moodysson’s early works.

Born in 1980 in Huddinge, Sweden to an Austrian father and Bosnian mother, Gabriela Pichler left her job in a cookie factory to attend the School of Film Directing in Gothenburg. Her graduation short Scratches won a Guldbagge for Best Short Film in 2009 and several international prizes such as Best Film at the Fresh Film Fest in Karlovy Vary. Eat Sleep Die is her feature debut.

Born in Lund in 1963 in a family involved in the local film industry, China Åhlander has been in the film business since 1985 and has worked at almost every department in the filmmaking process, mainly as location manager, production manager on Swedish and international productions. Her first job in film was as a trainee editor on Andrej Tarkovsky’s The Sacrifice in 1986. She started out as a producer by bringing her own documentaries to life. The film Close to the Soil (2001) was awarded Best Documentary at the Aspen Film Festival and Old Swedish Village (1991), screened all over Scandinavia.

Eat Sleep Die is her first feature film as producer. Next on her list is the comedy drama Gloria, the feature debut of Jenifer Malmqvist who achieved a hat trick with three films selected in Sundance including On Suffocation (2013). Åhlander is also developing a contemporary drama series The Malmö Syndrome to be shot in 2014 and directed by Malmqvist and Goran Kapetanovic (short-listed at the Oscars 2013 with Kiruna-Kigali). Åhlander produced Eat Sleep Die for the established production house Anagram. She has now her own company Chinema Film Sweden where she develops her own projects in collaboration with Anagram and other companies.