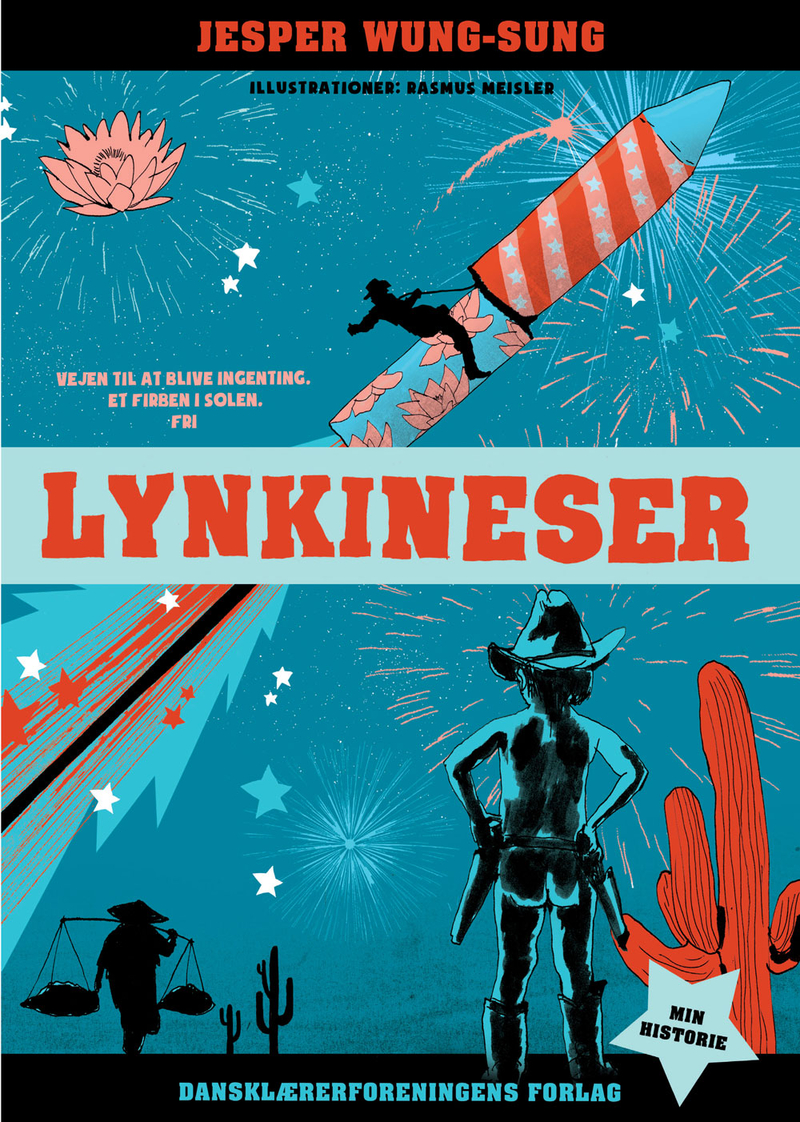 The book’s title refers to the author’s debut in 1998, when a journalist described Jesper Wung-Sung as a “lynkineser”, translated literally as “Chinese lightning”, or as we might more commonly say “a flash in the pan” or “one-hit wonder”. Despite this, Wung-Sung has gone on to write a variety of books in different genres and become one of Denmark’s most read authors. He has received many awards, most recently Boghandlernes Gyldne Laurbær 2018 for the adult novel En anden gren.

Lynkineser also alludes to the firecracker that naughty boys put in his great grandfather’s pigtail while he was walking on the street in Copenhagen. Because he was Chinese, he was put on display at Tivoli, but it’s there that he meets his love, Ingeborg, who lost her Danish citizenship when she married a Chinese.

Wung-Sung’s memoirs begin with this incredible story. We warm to his character just by opening the book and looking at the illustrations: Photos from Wung-Sung’s albums are manipulated, embellished, and cropped so that they jump out and pull the reader in while also distancing the reader from what is private.

The narrative is never self-delivering but challenges the reader about essential issues, partly through the author’s interaction with existence and partly through references to figures like Franz Kafka, H.C. Andersen, Johann Wolfgang Goethe, and Pete Seeger and to heroic stories from Alamo. How do you strike a balance between being a free individual and belonging to a community?

This motif is played with virtuosity in a number of short chapters in which the author makes us shudder at the thought of being a child without a word of English sitting in a yellow school bus in Houston, Texas. He makes us feel the sorrow when he sees his grandparents’ home turned into the holiday home of someone who has cut down the old pear tree. Do you remember how the pears tasted? He makes us hear the past as he lets the boys give him a dead leg and taunt him. And he makes our hearts beat a little faster when he says the name of the girl he loves in high school: Christina Bausager Jensen.

For Danish readers, the book opens the door to a wide range of varied and familiar writing. And for all readers, the book offers the opportunity to participate in marvellous, poetic, and nerve-wracking encounters of a life that is both like yet also unlike others. The unique and the similar meld together in the course of reading.

The illustrator improvises with the diary and scrapbook genres as a way of mirroring the author’s consistent play with the biographical: what is fact, and what is fiction? The intended young reader is never forgotten yet is challenged to understand.

And it should be noted that the title is completely misleading – this is a story not about a Chinese firecracker but about an entire fireworks show.