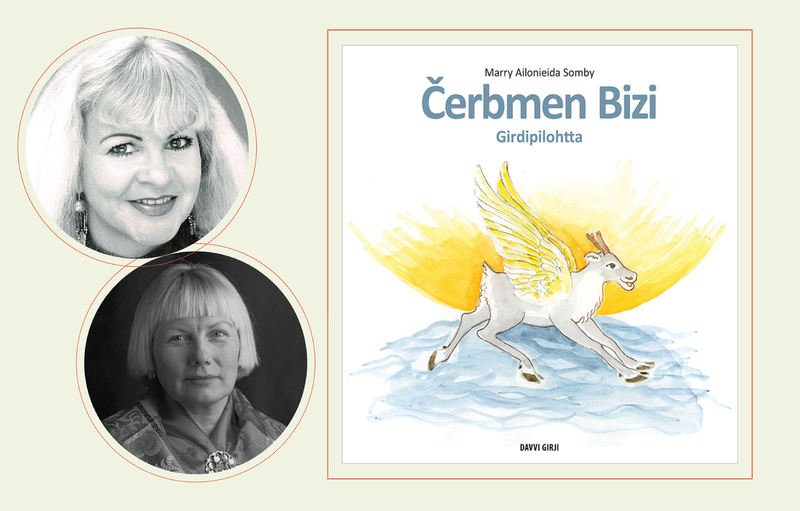 One-year-old reindeer calf Bizi is out savouring crowberries in the moss heather when he becomes aware of larger and tastier berries a little further afield. He then hears loud noises behind a tree, and before he knows it, he’s lying helplessly on the ground. He finds himself face to face with a huge reindeer who’s huffing and puffing and whose tongue is hanging out of his massive mouth. It’s the highly competitive reindeer Šuvun, and he’s been caught at a bad time. Šuvun and little Bizi race one another, but it’s impossible for the little reindeer calf to run fast enough. Bizi learns that he has to take the time to rest, to breathe with his tongue out, and practice a lot. Although he does wonder whether it’s possible to eat a gold medal and what you can use your best time for if you win.

Čerbmen Bizi – Girdipilohta (in English, “Bizi the little reindeer calf – the flying pilot”) is about a little reindeer calf who eventually becomes a flying pilot. He meets reindeer as they migrate and goes in search of his mother, Simla, and her love.  His encounter with the reindeer buck makes Bizi aware that bucks display their strength differently than does do. The buck casts doubt on who Bizi’s father is, and suddenly Bizi feels orphaned. Bizi meets a number of reindeer along the way – the movie star reindeer, the tourist reindeer, and the reindeer adorned with jewellery. All of them pass on some form of knowledge to Bizi. The little reindeer calf becomes a flying pilot, and when he finds his mother and discovers that she is still fond of him, he is overjoyed.

The easy-to-understand language conveys a message that is steeped in the traditions of the ancient siida community and the peculiar way that knowledge was handed down from one generation to the next. Although the story makes lavish use of fiction, it offers layer upon layer of important messages to the world’s future generations: “Happiness is closer than you think”, “Can you eat gold?”, “There’s no place like home.” The characters’ names are closely related to the traditional designations for reindeer.  Overall the language is visual and occasionally poetic.

The illustrations follow a fixed colour palette and reflect the content of the text. A particular strength is that they are in watercolour and thus serve to brighten the colour set without ever detracting from the story. The various reindeer are made distinctive through the use of simple, comprehensible props such as large watches, different-coloured horns, Rolex watches, and jewellery, which makes it rather amusing to follow their antics.