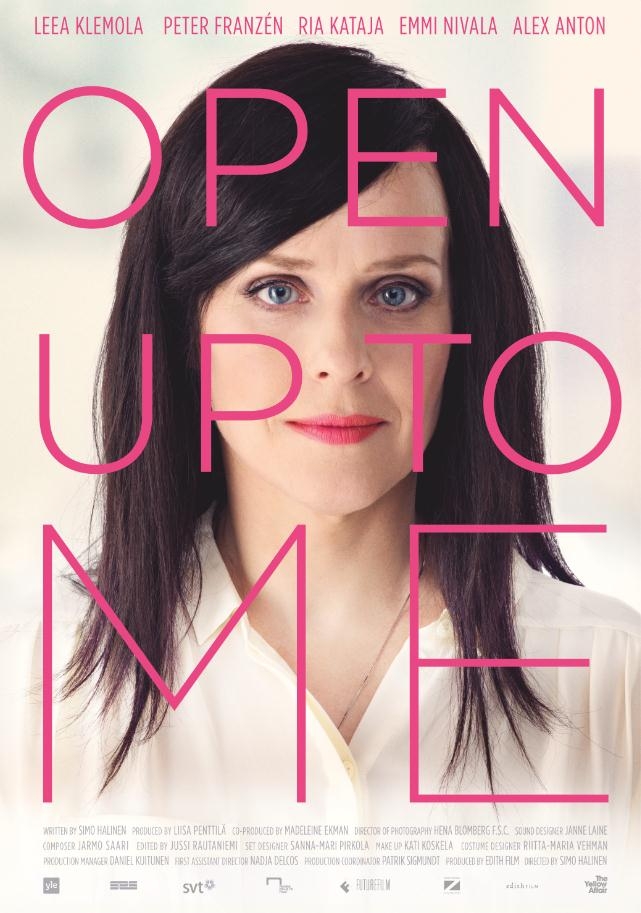 Maarit is a beautiful, intelligent and sexy woman – who used to be a man. Struck by the oddity of gender change, she is estranged from the daughter she fathered and from her previous life. When she meets and falls in love with Sami – soccer coach, teacher and family man – she finally feels like she can ‘fit in’ somewhere. But Sami is soon put to the test. In a world that considers Maarit a freak, Sami is forced to confront his own deeply hidden prejudices. And as for Maarit, with or without Sami, she has to step into a brave new world where only she can determine her sense of belonging.

Most people view themselves as being tolerant. It is only in close encounters with people different from us that our true colors shine through. In this way Simo Halinen’s Open Up to Me is an utterly human, fine-tuned test of tolerance. The main protagonist is a woman born in man’s body, Mauri, who has become Maarit after a sex reassignment surgery. Maarit, who has to battle with the societal pressures, is the real hero of the story with no evident baddies in it. Halinen, who both wrote and directed the film, shows great understanding towards human beings. Precise storytelling and excellent acting top off the intense whole.

Simon Halinen had the idea for the film while taking a Saturday afternoon nap. He had the vision of a cleaning lady, alone in a therapist office. As the phone rang, she answered and spoke to a man in distress. The cleaning lady somehow pretended to be the therapist and offered her help to the man. Reflecting on his dream, the director thought that only a very lonely woman could have such a strange behaviour, or someone who was carrying a heavy load on herself. Weeks later, it occurred to him that the cleaning lady must have been a transgender woman, and suddenly he felt he had a subject for an unusual film. However Halinen decided not to make sexual identity the main theme of his film but “how to cope with life when you are hiding your emotions from the people around you”.  The director was inspired by Susanne Bier’s Open Hearts and the ‘senselessness’ of characters in her film. Leea Klemola was cast as transgender Maarit because “she brought the overall feeling of crossing something a bit dangerous. “

The film opened in Finland on March 8, 2013 and received very good reviews. It won the Hand of Humanism, Honorary Prize at the Viitasaari Film Week and had its market premiere at the European Film Market in Berlin 2013.

Born in 1963, Simon Halinen is a writer/director, working for film and television. His TV works include the TV film Minerva (1997), the mini-series The Girl with a Pig Tale (2004) and three-part black comedy Golden Retriever (2007) His first feature film was Cyclomania (2001). Open Up to Me is his second feature. Halinen has also written two novels: Idänsydänsimpukka (2004) and Lemmenomenia (2008).

Liisa Penttilä-Askainen set up her production company Edith Film in 2001, in partnership with Zentropa. She was co-producer on Lars von Trier’s Dogville and associate producer on Manderlay. She produced Saara Saarela’s Twisted Roots that was Jussi nominated in 2010 for Best Actor. The following year Penttilä-Askainen produced the TV film The Door by Jan Forsström; she co-produced the children’s animation TV series Boris the Rat by Leena Jääskelainen and Kaisa Penttilä, as well as the German film Summer Window by Hendrik Handloegten.

She then teamed up with Aku Louhimies on his feature drama Naked Harbour that won the CICAE Art Cinema Award at the Festroia Film Festival in 2012.

After her collaboration with Simon Halinen on his TV series Golden Retriever (2007), Penttilä boarded his feature drama Open Up to Me, released domestically in 2013. Her upcoming projects include Juha Lehtola’s tragi-comedy Boy Upside Down starring Kari Hietalahti, Maria Heiskanen and Tommi Korpela, and Louhimies' action drama Ultimate Fight.

Penttilä-Askainen was named ‘Producer on the Move’ in Cannes 2012.