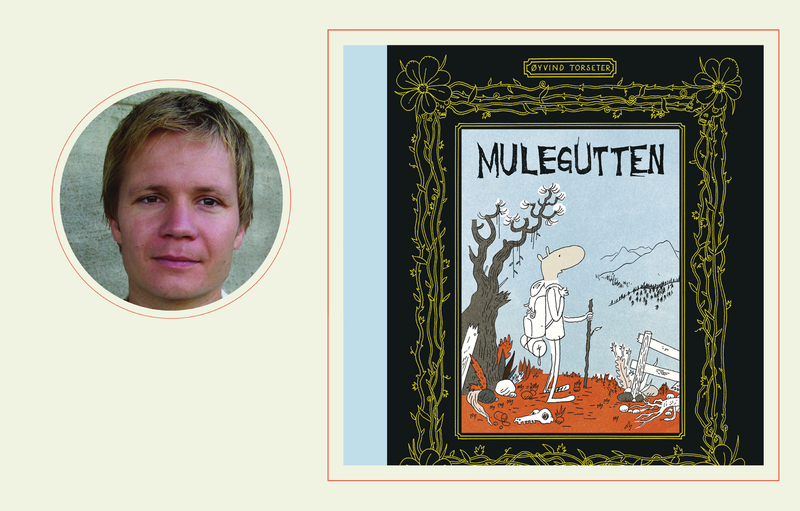 Mulegutten is a fairy tale about a king who sends out six of his seven sons to find themselves princesses. When the sons fail to return, Mulegutten goes in search of them. He discovers that a troll has turned the brothers and their brides to stone. He then goes inside the mountain to catch the troll and free the princess it has captured.

The book is based on the Norwegian folk tale Risen som ikke hadde noe hjerte på seg (in English, “The mountain troll with no heart of its own”) but it is much more than a retelling of an old fairy tale; the story carves out a path of its own from the very first page. Mulegutten commences with a nervous rag horse who has a strange gait. As the golden boy of the tale, he has adventures along the way, although in the world of Mulegutten and Torseter it may well be a saxophone that comes in handy, or an elephant’s trunk rather than a witch’s nose that is stuck in a tree stump.

The techniques of the picture book are combined with those of the comic book. Lines, narrative, and pictorial storytelling all complement each other. The distinctive use of colour creates an impact, with its emphasis on brushstrokes and white figures, as well as on the troll we’ve yet to see. Nor have we seen the princess, who’s somewhat cheeky, quite resourceful, and just a little bit sly. It is a funny, dramatic, and beautiful book. Each spread is surprising and unlike the one before it. There is always something to capture the reader’s gaze; each picture has its story to tell.

Although based on national folklore, the tale takes a rather ironic slant and fits in perfectly with our globalised age. Mulegutten is quite simply a treasure of a book.

It has been awarded the Kritikerprisen prize and nominated for the Norwegian Ministry of Culture’s prize for best picture book published in 2015.

Øyvind Torseter is an award-winning Norwegian illustrator, children’s author, cartoonist, and artist. He has published a number of picture books, for which he has won several major awards, either as the author or as the illustrator in collaboration with other authors.

Torseter studied at the Norwegian School of Creative Studies, the School of Graphic Design in Oslo, and the Kent Institute of Art and Design in the UK.