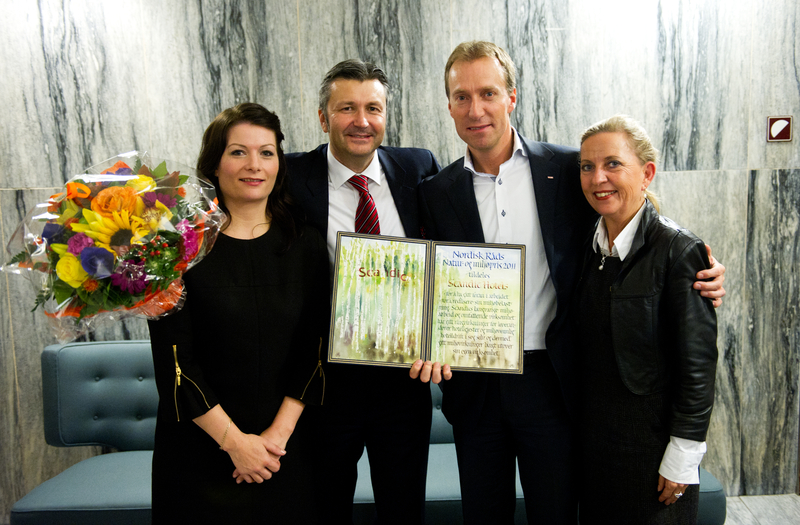 Photographer
Johannes Jansson/norden.org
Mail Facebook Linkedin Twitter
The winner of the Nordic Council’s Nature and Environment Prize 2011 is Scandic Hotels in the Nordic Region for their contribution to sustainable tourism.

This is what the Adjudicating Committee had to say:

"Since 1994 Scandic been at the forefront of efforts to reduce its own environmental impact, and the company has many followers in the promotion of sustainable development both in the hotel industry and in society in general. Scandic has shown courage in making demands of their suppliers, and also inviting their guests to contribute to its environmental goals, for example, by saving on laundry and sorting waste. By virtue of its extensive operations with 147 hotels in the region, Scandic's environmental work reaches a large number of customers".

What has happened since 1994

Scandic has trained 11,000 staff members on sustainability issues and built 19,000 eco rooms based on natural materials and sustainable construction.

Since 1996 Scandic has reduced:

Scandic is the first hotel chain in the world to publish its environmental footprint with live figures, constantly updated on www.scandic-campaign.com/ livereport

In 1994 Scandic stopped using disposable products (e.g. in the bathroom and at breakfast) and since then the savings have been 5,300,000 packages.

The breakfast buffet offers a completely organic breakfast. All coffee served in Scandic in the Nordic countries is Fairtrade and organic, a total of almost 20 million cups a year. Scandic no longer has bottled water in its hotels, but serves its own filtered and carbonated water in recycled glass carafes. This saves 160 tonnes carbon dioxide from transport every year.

The Scandic Sustainability Fund distributes 100,000 euros every year to external projects, which started in 2010. 114 of the 147 hotels have received the Nordic Ecolabel, the world's toughest ecolabel.

Scandic's environmental work is based to a large extent on initiatives from the staff. The towel policy ("Hang up the towel if you want to use it again"), which is now standard policy everywhere in the world, was invented by a Scandic employee. The idea to exchange single wrapped soap packets with dispensers, which is more or less a standard in all medium class hotels today, also came from a Scandic employee. Scandic's environmental work is discussed at the weekly department meetings. In addition, greater dialogue meetings are held approximately every three years. Environmental work is part of our daily work and comes naturally. All new employees are trained in environmental issues through our online training tool called CheckIn @ Scandic.