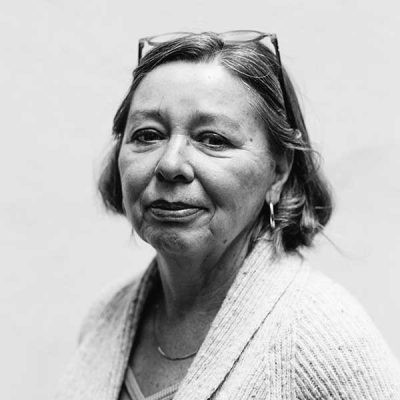 Susanne Ringell can be described as a poet and dramatist with a penchant for short prose. Her latest book, God morgon (in English: “Good morning”), is a genreless, disorderly living organism. Here is a narrator who is reflecting on the world and life, the essay-like tone interspersed with poetry, fiction, and scenic and dramatic elements. August Strindberg’s A Dream Play serves as an important intertext for the book, and Strindberg’s opening words coincide with Ringell’s way of writing: “...in an insignificant basis in reality, delusion is spun to weave new patterns: a mixture of memories, experiences, free-thinking, absurdities, and improvisations.”

God morgon consists of ten prose pieces of varying lengths. In all of them, the narrator and her husband are travelling, often to so-called tourist paradises: “the whole world wants to escape the misery of the whole world, to leave it behind, to get away”. The two are lovers, “as such always helpless”, and balance closeness and distance. Suddenly another couple materialise in the holiday apartment, Clair and Pascal. With the help of the French couple’s more elaborate choreography, which undergo a transformation from separation through reunion to marriage, Ringell sets gender as “a continuous performance.”

Through it all, Ringell retains a keen eye for drama: scenes, props, costume changes, entrances, and exits. But the neat dramaturgical arcs are interrupted. An old dog is dying under a blanket, but it has such a strong heart that it carries on beating even after the story has ended. Another story gains momentum when the narrator succeeds in overcoming her disappointment, yet ends with this disappointment turning out to be groundless. The result of action is not important: “to act is always more important than the justification of action.” Time and again the self-conscious protagonists go out into the shadows and the scene fills with the light of everyday heroes who sweep in to sort things out and who can understand both animals and humans. An openness to both reality and dream so great that it almost resembles skinlessness is expressed in language full of movement, colour, and tenderness. Even we, the book’s dull readers, are swathed in Ringell’s friendly concern. There is a powerful sincerity that is always accompanied by a subtle humour and a sense of the tragicomic:

The smiling mouth of the moonlight, as drawn by a child, over the dark body of the sleeping mountain animal. Like a child draws its mother’s mouth; smiling, big.

The smile of the sky droops slightly, as if she had had a stroke, the mother, the moon, but still.

Susanne Ringell was born in 1955 and lives in Helsinki. She is a trained actor but now writes full time. She made her debut in 1993 with the short story collection Det förlovade barnet. Since then she has had a dozen books published and written plays and audio plays. She has been nominated for and won several awards, including the Hugo Bergroth Language Prize, the Svenska Yle Literature Prize, and the Swedish Literature Society Prize.