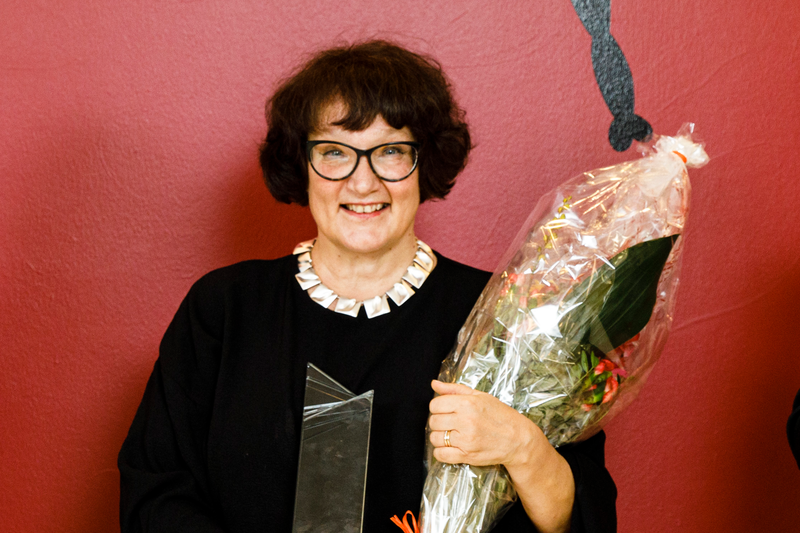 Monika Fagerholm received the Nordlys statuette during a small ceremony at Nordic Culture Point in Helsinki after winning the 2020 Nordic Council Literature Prize.

Monika Fagerholm is awarded the prize for a work that is a stylised tale of morality written with fervent energy.

Monika Fagerholm’s novel Vem dödade bambi? (in English “Who killed Bambi?”, not translated) is a stylised tale of morality written with fervent energy. A gang rape is committed by a group of well-to-do youths in the bourgeois suburb of Villastaden outside Helsinki. Fagerholm’s focus is not the victim but the perpetrators and what takes place before and after the rape, especially the parent generation’s efforts to smooth everything over afterwards. This gives her an excellent opportunity to demonstrate her exacting social satire. The language lurches forwards, then crackles with sheer power before turning into a melancholic incantation. Somewhere in this web of dialogue, choruses, and pop-culture references is a hard truth that affects the people no matter how much they try to defend themselves against it. Gusten Grippe, the only perpetrator to admit his guilt, becomes a counterforce to the dark hollowness from the room where the attack took place. Set against our perpetually superficial, status-hungry time is a yearning for the unspoiled, an essential longing expressed in the form of memories of love and friendship, moments that can be recalled and from which strength can be drawn.