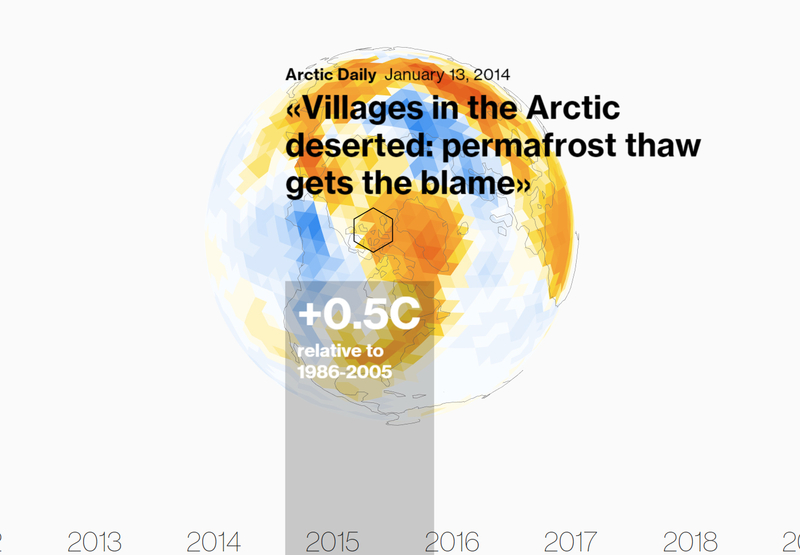 Mail Facebook Linkedin Twitter Sign up to newsletter
A new digital tool will make it easier and more fun to understand the consequences of climate change. In addition, eleven stand-up comedians from the whole Nordic Region will tell global warming jokes.

Heat waves and floods in China and the USA, extreme precipitation in Pakistan, drought in Russia and extreme cold in South America. These are some of the consequences from the reports put forward by the UN panel on climate change (IPCC). A new digital tool funded by the Nordic Council of Ministers now gives users the opportunity to navigate through the future and see with their own eyes how temperature fluctuations are expected to change up until 2100.

In addition, there will be fictitious news headlines from the future describing the climate consequences in the report. By clicking on the headlines the user will get an excerpt from the IPCC report which explains the consequences in more detail. This will provide a better understanding of climate changes, according to the Nordic Council of Ministers' Climate and Air Quality Group (KOL).

"The climate reports are written by researchers for researchers and are therefore very technical. Young people are very engaged in climate change so we have made a digital tool which communicates the most important points in the reports in an innovative and visual way", says the Chairman of KOL, Reino Abrahamsson.

The severity of climate change and how great the changes in the weather are will depend on our ability to limit CO2 emissions. Researchers and the UN climate panel have defined a set of possible future climate realities as determined by what we are doing today. In the new digital tool the users can choose CO2 emissions themselves and see with their own eyes the consequences for the future.

Try yourself on: www.globalweirding.is/here Cicero and Bengler have created the webpages.

Global Weirding has become an international concept which describes the increase in average global temperatures and the effect this has on our society.

To spread knowledge on climate change to audiences which do not usually have inside expert knowledge, the project has invited Nordic comedians to do stand-up shows on the climate debate. Comedians from all the Nordic countries will take part. See the clips here:

Environice and Mystery have produced the films.

The UN climate panel (IPPCC) has published a total of five reports on global climate change. In the last report, which was presented in November 2014, the panel put forward, amongst other things, the consequences of climate change and initiatives to reduce climate emissions.

The climate challenge is another Nordic venture to spread knowledge about the environment and climate. The project is a big competition between school classes in the whole Nordic Region and will run until 23 March 2015. Read more about this project on www.klimaduellen.org.