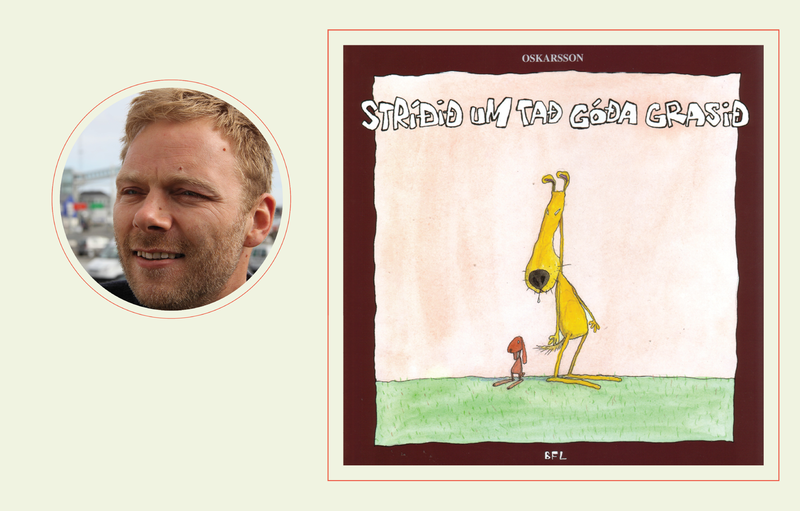 The rabbits are getting really tired of sharing the lovely grass with the stupid dogs. Aside from the fact that the dogs crap everywhere, their natural instinct is also to hunt the rabbits. It’s not easy for little rabbits to stand up to a dog, yet they find a very clever solution. Finally they get a bit of peace and quiet, but what’s happening with the grass? Is it really true? That the tasty grass can’t do without the stupid dogs?

The illustrations are in Oskarsson’s distinctive style – sensitive minimalist strokes full of expression and humour. In this book Oskarsson allows himself to be adventurous in terms of colour – the sky is a beautiful aquamarine, while the tasty grass (which is at the heart of the conflict) is thoughtfully depicted in terms of both colour and detail. Like Oskarsson’s other picture books, the surroundings are devoid of national characteristics, creating a story that could take place anywhere.

Oskarsson often addresses ethical challenges and existential questions in his picture books. In Stríðið um tað góða grasið (in English, “The quarrel over the good grass”), Oskarsson tells a highly topical story about an uneasy coexistence.

His characters are often animals, yet they are equipped with recognisable human qualities, emotions, and behavioural patterns. In this case, the physically weaker rabbits are made more human than the dogs. This enables them to carry out more cunning plans and reflect upon the situation, while the dogs behave more like normal animals. The result is that the reader identifies closely with the rabbits. There is unreserved sympathy for the poor little animals, who are portrayed as having a touching vulnerability and uncertainty which gradually give way to aggression and defiance. The reader fully understands their frustration and is impressed by their courage and skill, yet is compelled nevertheless to take a position on the advisability of their strategy. The story calls for reflection by demonstrating the link between anxiety and aggression and by exposing the disadvantages of feigned strength and invented danger. At the same time, the story calls into question the sense of entitlement that we often seem to experience as being natural.

The book can be seen as a warning against simple and short-sighted solutions to conflicts: what may initially seem to be a smart and obvious plan can soon lead to unforeseen consequences. The rabbits must at least acknowledge the potential need to take the rough with the smooth and that there may be some truth in the saying that nothing is so bad that it’s good for nothing.

Bárður Oskarsson (born in Tórshavn in 1972) is a picture book author, illustrator, and artist. He made his debut as a children’s author in 2004 with the book Ein hundur, ein ketta og ein mús (in English, “A dog, a cat, and a mouse”) which has been translated and met with acclaim in several countries. This debut went on to win the West Nordic Council’s Children and Young People’s Literature Prize in 2006 and was included as a “Special Mention” in the White Raven of the International Children’s digital library in the same year. Stríðið um tað góða grasið received the same honour in 2013. Oskarsson’s books have been translated into Danish, Norwegian, Swedish, Icelandic, English, French, German, and Czech. He has received several prizes and various types of recognition, including the LUCHS-Preis für Kinder- und Jugendliteratur prize for Hin Flata kaninin (in German “Das platte kaninchen”) in 2013, which was also nominated for the Nordic Council Children and Young People’s Literature Prize in 2014. In 2015 he received the annual award of the Faroese Cultural Foundation, and he has been nominated for the 2016 Swedish Pan Prize for Ein hundur, ein ketta og ein mús (in Swedish “En hund, en katt och en mus”).