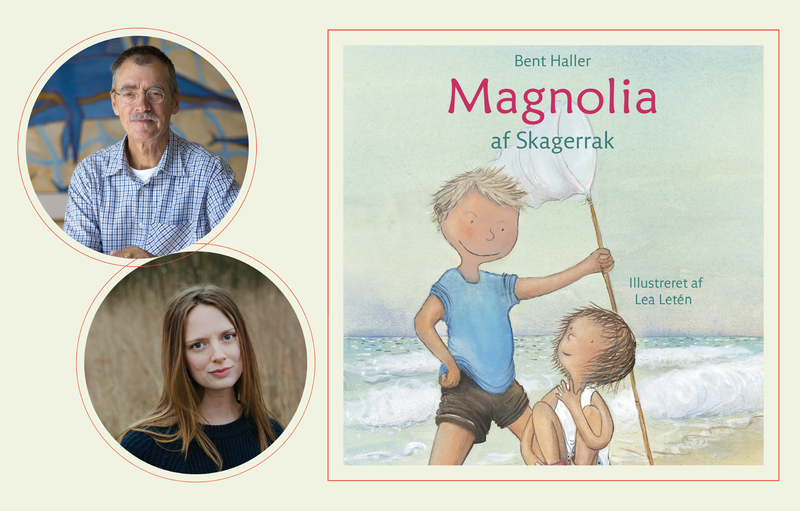 Magnolia af Skagerrak (in English, “Magnolia of Skagerrak”) is a book for reading aloud that manages to give this special genre a level of dynamism rarely seen.

The protagonist, Magnolia, spends her summer holidays with her grandparents, older brother, and two slightly older cousins. The days all merge into one the way holidays do when what’s most important is being together, enjoying nature, and relaxing.

The children go exploring the dunes but must watch out for snakes and ticks. They stand on the beach and fish in a sea too dangerous to bathe in. And they have an anchor in their grandparents.

With a good deal of empathy, the author portrays how children experience and sense their surroundings, and how they create hierarchies while playing. Additionally, he reveals a world that exemplifies the summer holidays but with flashes of danger and disease just below the surface. This duality is evident in the grandmother and grandfather’s roles in relation to the children – she is their connection to everyday life and its fixed routine, while he is the fantasist, playing and dreaming. When the grandmother thinks he’s getting to be too much, he goes to his outhouse and whittles. (He’s from Småland – make of that what you will).

The first and last of the book’s three sections tell the story of summer-holiday life, while the middle section is a magical story that gives a voice to a wee blob of a whale who brings about the interplay between the holiday idyll, its dangers, and the family’s history.

The illustrations skilfully reflect the many layers of the story. A single image shows the children’s impressive hierarchy, a sequence of images captures a bird in wind-borne flight, a few lavish double-page spreads show the reader the duality under the surface (of the sea), and the central figure, the wee blob of a whale, is given a realistic portrayal as the transition between reality and fantasy.

Lea Letén’s pictures of the sea and the whale are reminiscent of some of the most evocative works by Bent Haller: the fabulous Kaskelotternes sang and the mythical tale about the water girl called Silke.

What makes Magnolia af Skagerrak special is how both the words and pictures address the specific needs of a book meant to be read aloud: Naturally the speaker adds his or her own way of interpreting the words and pictures, but there are clearly points where the curious listener goes beyond keeping their eyes and ears open, where they are compelled by their curiosity to ask questions. The detail of the pictures have this effect, and the grandfather’s teasing and quirky choice of words in particular call for interruptions and questions. The effect is heightened further by the wily old fox from Småland, who despite his 40 years in Denmark retains a distinctive Swedish quality when he dreams up “little Maggenolia”.

There are a number of read-aloud books being published, but reading these does not often prompt the kind of intense interaction that there should be between adult and child. Consequently, this book is something of a rare gem!