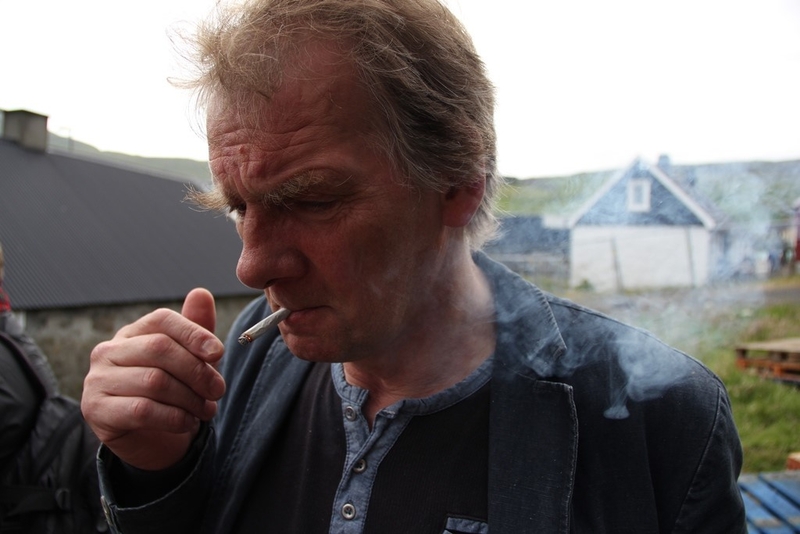 The simultaneously primitive and magnificent title Gudahøvd (in English: “God’s head”) is indicative of the mood of Jóanes Nielsen’s tenth collection of poems. The same can be said of the inherent prose quality of Nielsen’s entire lyrical output. It is five years since Nielsen last published poetry, but in the meantime he has written both plays and novels.

Nielsen’s partner, Rannvá Holm Mortensen, has illustrated the book. The simple yet expressive linoleum touches are well suited to the mood and style of the book.

In several of the poems we come across a hackneyed poet in a hackneyed world, a poet who is no longer young and whom we recognise from other, earlier poems, who with equal measures of humour and defiance of death portrays the weariness of the body from age and its gradual decay. The poem “Prostataherrerne” gives an almost surreal description of the reality for many men suffering from prostate problems – the need to get up and go to the toilet many times during the night.

You can see them everywhere

Three, four times a night they go to the toilet

releasing the urine collected in their reservoirs

as if we were talking of waves of several thousand tonnes

For many years, the body has been held in almost demonstrable reverence in Nielsen’s poems, but here there is no mention of a beautiful, idealised, spiritual temple but rather of a perishable, sexualised, and animalised body. We resemble animals, and one poem questions whether “you”, the reader, have seen your wife execute her necessity in the same way as a dog or rat. But there is no holding back in this description. On the contrary, her animal traits are just one of the reasons why the poet loves his wife.

Perishability is the most important fuel for these poems. Several of them are about writing poetry and living, all from an existential stance yet with a focus on all that is living, be it a little Norwegian bird flying into a window in the hamlet of Norðdepli or the growing loneliness of a poet’s existence and the many rooms one waits in for new organs, biscuits, or just life and death.

And there in between it all is a sick and weary planet, itself the physical foundation of existence, crumbling at the poet’s feet and revealing an existential bond:

What if we have two or two hundred centuries left

or if the earth carries on for another ten thousand years,

what then? We can do without blueberries

and the scent of tulips.

Seed banks have long since taken over the role of fathers.

rotating just as well as a healthy one.

Through the devil-may-care formulations, the attitude is clear. The poem about the butter-loving Price brothers takes an unexpected turn when it segues from the culinary to a poetry that requires the poem to be brave enough to throw itself off a fell, which requires trust in the poetic angels. On one occasion the angels do not come and the poem has a bad fall and needs to take painkillers while the Price brothers are sampling the royal sauce.

There is a sense of unique storytelling in Nielsen’s poetry that is almost reminiscent of small concentrated novels with boundless stories and outlooks on life from a bygone era, while the characters appear strangely current and present in the here and now. This is true of the poem where a power failure results in a peculiar visit, when the two co-religionists and protagonists Luther and Melanchton make themselves at home with the poet. There are many such buoyant pearls in the collection, each one formulating the conditions and contexts of life in its own way. Hell is on earth, and God does not exist, but still we pray to him because:

we who have eradicated hell on the other side of death

the hell of hypocrites and liars

the hell between classes and nations

oh! give me back the old hell

we can deal with that.

Days are becoming ever more heavy

I almost don’t dare to say it

if that is too much to ask

then just a quiet word through a chink in the door.

Take from me what teeth I have left

loosen the nails from my fingers

I can resign myself to everything

just not to death...