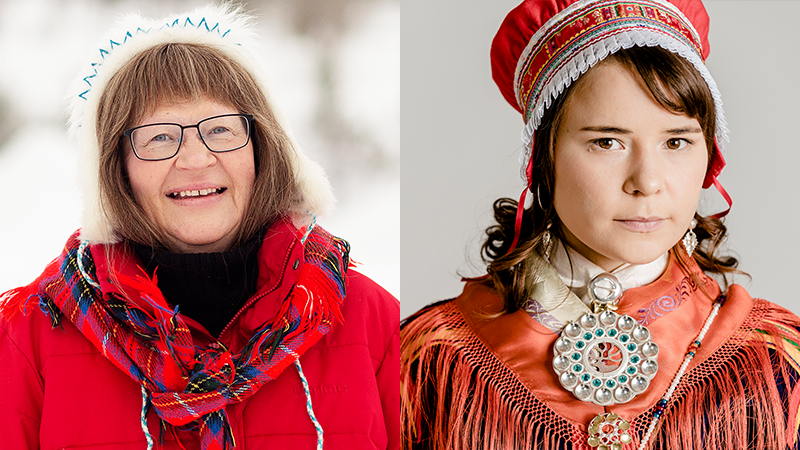 In Guovssu guovssahasat(“Guovssu’s northern lights”, not translated into English), Karen Anne Buljo tells a traditional Sami story of how the dangerous northern lights came to get their colours. Guovssu Guovssahasat is based on the traditional Sami art of oral storytelling and the story of how the northern lights got their colours. The Sami have always warned their children through storytelling not to challenge the forces of nature. Danger is everywhere and children are taught to think independently from an early age.

We can see how the story of this book reflects exactly this, as a mother tells her children about why it’s so dangerous to defy and tease light without colour. The children in the story learn about the lights’ competition for the colours, the midnight sun, and how the rainbow came to get its colours. The northern lights became colourless and are now on an eternal hunt for colours. The mother tries to make the children understand that they have to be on their guard because this light can be extremely dangerous.

The children’s key to protection against the many mythological dangers comes in the form of silver amulets. The mother asks the children to show these to any strangers who come to the house while the parents are tending to their herd of reindeer. Despite being under strict orders not to leave the lavvu, the children are lured out by other children. While the older children are out playing, little Guovssu goes out and teases the northern lights with ancient Sami rhyme. He is taken by the lights. The older children look on dismayed and try to catch Guovssu, but are themselves sucked into this powerful light.

The parents are met with this as they return home, and they ask their children to release their colourful silk scarves and silver amulets. As they do, the northern lights release their grip and the children are put down with their mother and father.

The author has produced an exciting book on how the northern lights came to get their colours. Inga Viktoria Påve’s colourful illustrations help to bring the story to life and inject excitement.

The book is easy to read and easy for children to understand, while Påve’s illustrations are naturalistic and expressive. She employs a beautiful colour scheme for the illustrations, which underline the mystery of the story.