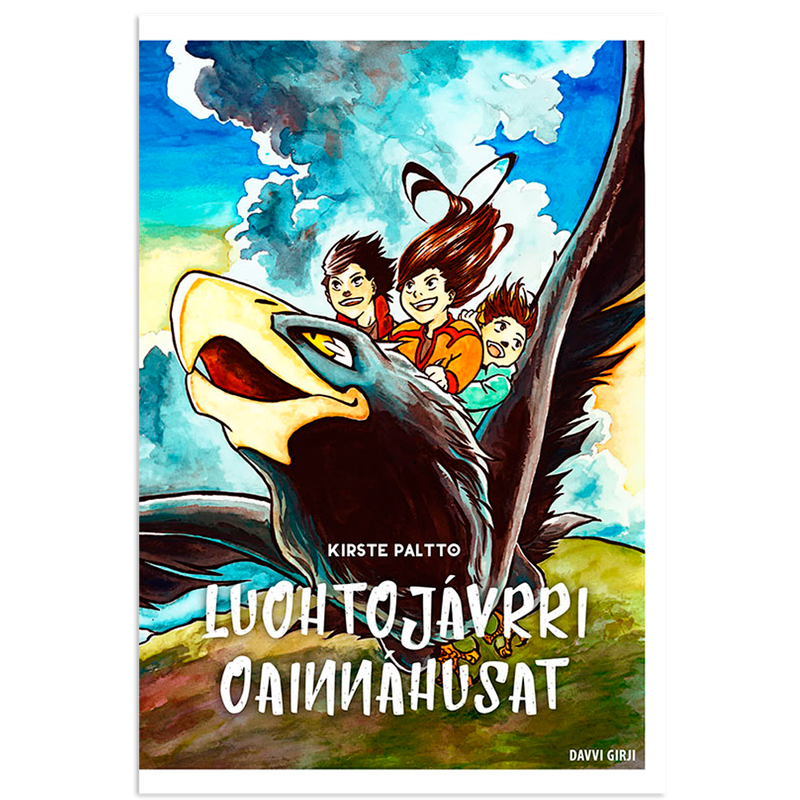 Kirste Paltto’s Luohtojávrri oainnáhusat (“The Luohtojávrri Experience”, not translated into English) is an exciting children’s novel in the language of the Northern Sámi.

The main characters, Urbán (8) and Ritni (6), are on a camping trip on their own for the first time. They are awoken by the presence of a strange girl, Laksi, in their tent. The trio become friends and the boys leave their safe, familiar world behind and soar into the unknown on the back of the great eagle Alli. In Laksi’s world, the boys encounter creatures the likes of which they have never seen. But Laksi’s friend Golláš has disappeared, and the trio face all sorts of trials and tribulations in their attempts to find her. What happened to Golláš? Who left the mysterious, square tracks? Is the old bird known as Stuora Rávdu dangerous? On their quest to solve the mystery, they employ various means of transport and receive help from a veritable menagerie of weird and wonderful creatures.

By linking the mythical with the real, the book tells a tale that will capture the imagination of young readers from the first page to the last. Paltto has a solid grounding in the traditional Sámi myths, which she recreates and renews in a unique and innovative manner that makes them relatable to modern children. In order to enlist the help of the creatures in Luohtojávrri, or make use of the various means of transport found there, the children must use their hands and their voices, chant in Sámi, tell stories and recite poetry.

Paltto uses these elements to stimulate her young readers’ imaginations. With the help of Laksi, the frightened little boys are transformed, and develop great confidence in themselves and their abilities. They also learn that they are capable of mastering a strange world, and eventually succeed in finding Golláš before returning home. The text is tailored for young children in terms of content, language and form, and yet the language is beautiful, poetic and colourful. The book is beautifully illustrated and has a fascinating cover.