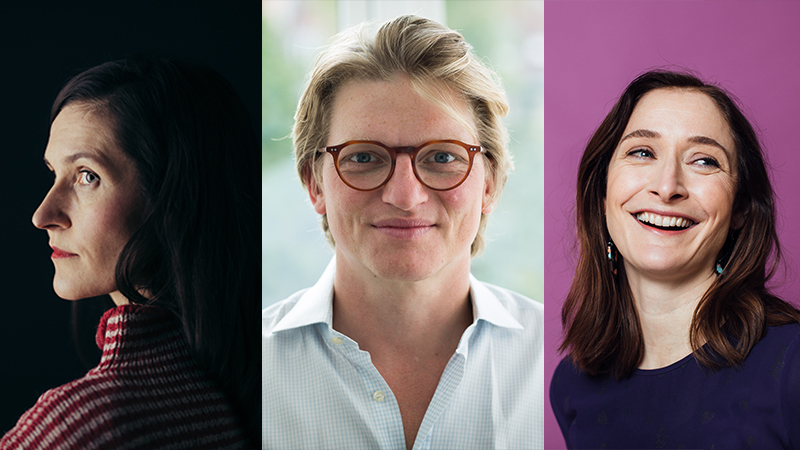 A figure laden with a backpack, tent, and mushroom basket goes out for a walk in the forest to enjoy being close to nature. Berry picking and a dip in an icy stream are on the cards, but what if there’s a bear?! What then?

This is what Kivelä, Glaz Serup, and Bondestam ask their readers in the picture book Om du möter en björn (“If you come across a bear”, not translated into English). It’s a realistic question. In the forest there are wild animals that even a visiting city dweller can relate to. Inspired by a fact brochure about real encounters with bears, the book begins with sober, sound advice such as “Do not run, because bears can run faster than you.” But soon the narrator turns to happily speculating over what you can do better than the bear, or why it might be good to bring a touchpad.

Om du möter en björn is an impressive, fully formed pan-Nordic picture book collaboration that skilfully exploits small nuances in the text and is united into a whole by the varied picture story. The makers of this picture book engage in carefree play with reader expectations, offering a shaggy adventure that lets the book’s bear shine in the lead role. The register is broad and ranges from a good-natured furry teddy bear friend via furious monsters that fill the entire spread to an animal who is rather uninterested in us humans.

Kivelä, Glaz Serup and Bondestam make use of parody, pedagogical skills, and a sharp perception of the present in order to offer a refreshingly cheeky picture book for all ages that will elicit both shivers and laughter. In the Nordic countries, life close to nature is highly valued. But how wild can it really be for us city dwellers who like our comforts? The picture book makers also torpedo the enduring myth that children’s literature should always teach its readers something. Aren’t humour and drama enough?

Malin Kivelä (born 1977) is an award-winning Finnish-Swedish author, playwright, and journalist who writes for adults and children. Her previous collaborations with Linda Bondestam include the picture book Bröderna Pixon och TV:ns hemtrevliga sken (2013), which has been dramatised for the stage.