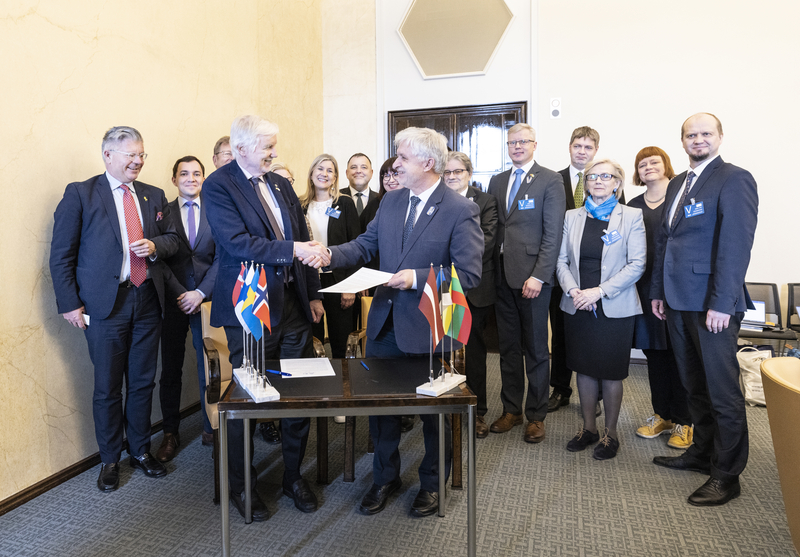 Mail Facebook Linkedin Twitter Sign up to newsletter
The Nordic and Baltic countries must do their utmost to support Ukraine and secure peace and stability in the region. This is part of the content of a co-operation agreement signed between the Nordic Council and the Baltic Assembly for 2022–2023.

The co-operation agreement was signed at a meeting in Helsinki on 25 April. Although it is a broad agreement covering many areas, it is strongly influenced by the Russian invasion of Ukraine.

Among other things, the agreement states that Russia’s unjustified and cruel actions are a threat to peace and stability not only in Ukraine, but also in the Nordic-Baltic region.

“The Nordic and Baltic countries must do everything in their power to support Ukraine, stand united and come up with strong incentives to put an end to Russia’s aggressive behaviour and secure peace and stability in the region,” the agreement reads.

The two organisations emphasise that the Nordic and Baltic countries must work together to reduce the effects of the war. They underline the importance of a peaceful and stable Nordic-Baltic region and point out that regional security is an important driving force for development.

“The Nordic Council and the Baltic Assembly have a long-standing and deep co-operation based on common values of democracy, human rights and the rule of law. In the current situation, we must stand up for our values and show that we wholeheartedly support Ukraine and international law. At the same time, we must work to restore the foundations for multilateral co-operation to address the existential threats to all of humanity, which consist of weapons of mass destruction, climate change, and diminishing biodiversity,” says Erkki Tuomioja, President of the Nordic Council in 2022.

The co-operation agreement between the Nordic Council and the Baltic Assembly isn’t only about Ukraine. The agreement covers nine areas that the two organisations want to prioritise in 2022–2023.

It will include extensive co-operation on foreign and security policies, including cyber security, as well as fake news and propaganda from authoritarian regimes. In addition, the two organisations will work together to promote democratic values, support a secure energy supply in the region, co-operate against climate change and for the circular economy, and learn from the COVID-19 pandemic to be better prepared for the next crisis.

The agreement was signed by Erkki Tuomioja and President of the Baltic Assembly, Jānis Vucāns.

The Nordic Council was established in 1952 and is the Nordic Region’s official inter-parliamentary body. It has 87 members from Denmark, Finland, Iceland, Norway, Sweden, the Faroe Islands, Greenland, and Åland.

The Baltic Assembly is a parliamentary co-operation body composed of members from Estonia, Latvia, and Lithuania. It was formed in 1991.

The Baltic Assembly and the Nordic Council have been close partners and allies since 1990. The co-operation of both organisations is based on a common understanding of the values that the Baltic-Nordic region represents. Democracy, rule of law and human rights are the core values of the Baltic and Nordic states and should, therefore, be highly respected and cherished. The work and common activities of the Baltic Assembly and the Nordic Council are also shaped by mutual trust and a common understanding of the importance of the co-operation of both regions.

Both organisations believe in the strength of a peaceful and stable Baltic-Nordic region. They therefore consider regional security an important driver for development. The Russian Federation’s invasion of Ukraine is an unjustified and cruel act that also poses a clear danger to peace and stability not only in Ukraine but also in the Baltic-Nordic region. The Baltic and Nordic countries must do everything in their power to support Ukraine, be united on demonstrating a strong incentive to bringing an end to the aggressive behaviour of the Russian Federation, and ensure security and peace in our region. The social and economic consequences of the invasion will affect the Baltic-Nordic region and, for this reason, the countries need to work together to support Ukraine but also mitigate the impacts of the war on the region.

For the integrated Baltic-Nordic region, transport, energy and infrastructure interconnections, as well as digital interoperability, are of utmost importance. Another important driver for the development of the region is the degree of transparency and compatibility between education systems, and one of the steps towards this goal is mutual recognition of higher education diplomas in the Baltic-Nordic region.

The Baltic and Nordic states share the view that the world does not revolve around them alone and that all decisions made today have to be done in a way to preserve the world for future generations. Climate change, global inequality and anti-democratic sentiments threaten the world and its development. The global fight against these threats cannot be won by individual countries but rather by joining forces. The Baltic and Nordic states are prepared to jointly contribute to addressing these issues.

Similarly, current challenges posed by COVID-19 have to be addressed together. The exchange of information and best practices, as well as joint efforts to swiftly recover from the crisis, are vital for the Baltic and Nordic states. For this reason, the Baltic Assembly and the Nordic Council will aim to bring together experts, parliamentarians and ministers of the Baltic and Nordic states in order to find the best solutions and learn from each other’s experiences, not only to address post-crisis challenges, but also to be better prepared for cross-border crises in future.

Taking into account the foregoing considerations, the Baltic Assembly and the Nordic Council have agreed on the following priorities of co-operation for 2022 – 2023: